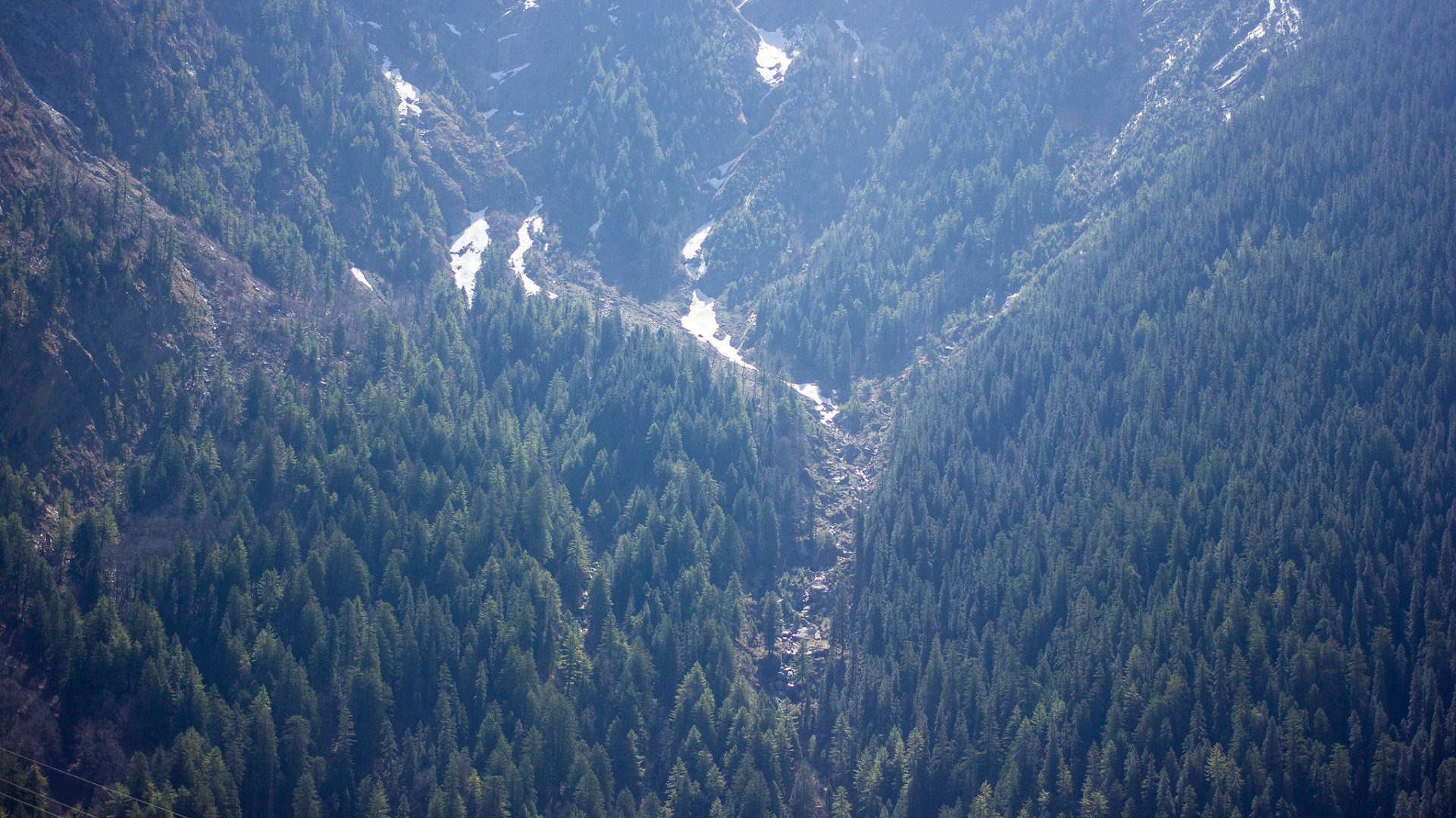 “Do you know that apple trees need to sleep — and that too about 1,000 hours a year? If they get their quota of undisturbed sleep, we have ripe apples, probably the best in all of Uttarakhand,” said Mohan Singh Rana, answering my question on indicators of a changing local climate. “Apple trees get their best sleep when it snows; the additional weight of snow helps them, almost like the heavy warm blankets that work for us. But recent times have witnessed untimely, prolonged and destructive hail storms. Hail not only disrupts the apple tree’s sleep, but also harms it physically.”

Mohan Singh Rana is a resident of Sukkhi village that lies in the Bhagirathi Eco-Sensitive Zone (ESZ), on the edge of the Gangotri National Park. An ex-serviceman with the Indian Army, he is one of a group of villagers raising their voices against the design of the proposed Char Dham Highway Development Project that threatens to worsen the region's ecological problems.

Recently we have witnessed untimely, prolonged and destructive hail storms In the ecologically sensitive state of Uttarakhand, there has been a continuing effort to make the Chota Char Dham pilgrimage (covering Yamunotri, Gangotri, Kedarnath, Badrinath) more convenient and there has been substantial success on that front. The same Kedarnath valley that was devastated in 2013 by cloudbursts and ravaging floods, today witnesses 300 helicopter sorties daily, taking two hours to transport pilgrims to and fro from the shrine, all blessings and tickets for salvation received.

This evolution of comfort has been in tandem with the degradation of the local environment. The Chardham Mahamarg Vikas Pariyojana or the Char Dham Highway Development Project is a 900-km-long two-lane highway, that will improve connectivity to these shrines on completion. The stated objectives of the project are to mitigate risk, reduce travel time and increase comfort for pilgrims.

One of the BJP's major pre-poll promises in Uttarakhand, the Char Dham Highway Development Project has been steamrolled through bureaucratic corridors.

A pet project of Prime Minister Narendra Modi and one of the major pre-poll promises of the BJP in the state, it has been steamrolled through bureaucratic corridors and is being treated as top priority. However, it is interesting to note what has ensued in the process of this acceleration. The 900 km project has been broken down into 53 segments, all less than 100 km in length. This has allowed it to silently slip between the rules requiring an Environmental Impact Assessment (EIA) — mandatory for road projects over 100 km in length.

In the stretch along Sukkhi village, a bypass was proposed through the opposite mountain, making the current road that passes through the village redundant. This new proposed path is currently covered by a dense virgin forest that will have to be axed to make way for the highway. Villagers do not want the forest to be harmed, citing environmental reasons, and are hoping that the highway project just expands the existing road.

Documents related to the road widening project, procured through an RTI by activists, and responses from the DFO office in Uttarkashi, mention the clearing of 3,595 trees for the project in the Dharasu-Gangotri stretch. Thereafter, in the “Birendra Singh Matura vs MoEFCC, MoRTH, NHIDCL, BRO and the State of Uttarakhand” case, petitioners contested this number and submitted proof that tree markings in just the 15 km Bhaironghati to Jhala stretch crossed over 6,000 (within the the Bhagirathi Eco Sensitive Zone), not including the unmarked trees and shrubs falling within this same area that were slated to be cut. Trees at Bhaironghati (near the confluence of Jad Ganga with Bhagirathi) marked to be cut down. They fall within the Bhagirathi Eco Sensitive Zone and Gangotri National Park. Photo courtesy Siddharth Agarwal

The DFO office in Uttarkashi, in response to RTI queries, mentioned the clearing of 3,595 trees for the project in the Dharasu-Gangotri stretch

Surveys done over time, including those by the Geological Survey of India, indicate that these slopes are extremely fragile and fall under seismic zones IV and V. New trees and shrubs had been planted here for the purpose of slope stabilisation by the National Environmental Engineering Research Institute (NEERI), as part of an existing undertaking for this area. But the new road project involves the cutting of some of these newly planted trees and shrubs, potentially further destabilising these slopes, creating a rather adverse situation for what aims to be an all-weather road. Work within the Bhagirathi ESZ has been currently put on hold, until a new Zonal Master Plan (ZMP) is created and approved.

In the ongoing case in the National Green Tribunal between the ‘Citizens for Green Dehradun’ and the authorities involved in the project, the court has pointed out that adequate measures have not been taken and indiscriminate dumping of muck continues on riverbanks and mountain slopes. However, there has still not been any action on this illegal activity that threatens more than just road safety.

Mallika Bhanot, an environmental activist from the state, shares that landslides have also substantially increased in the under construction areas because of unmindful cutting of the mountain at odd angles, improper treatment and excessive felling of trees. Recent pictures sent by her show that muck dumping continues on the slopes of the mountains. It is in one such spot, Naalupani, that a bus fell into the gorge on 19 July.

Landslides have increased in the under construction areas because of unmindful cutting of the mountain at odd angles, excessive felling of trees 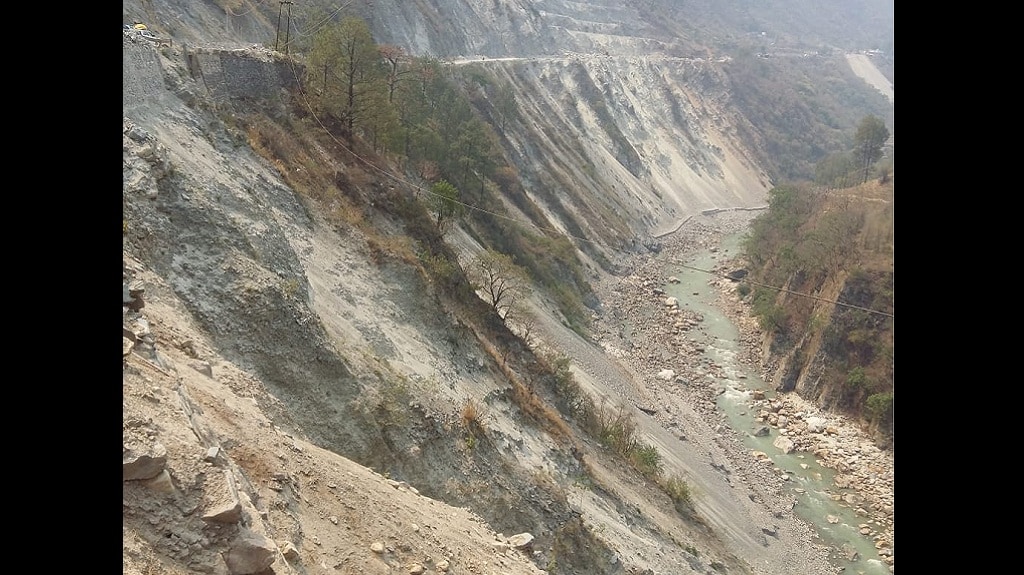 The effect of indiscriminate dumping along NH 94: Entire slopes have been destroyed and the debris is affecting the river. The spot at Naalupani where a bus fell into a gorge recently. Photo courtesy Mallika Bhanot

This unmindful dumping of muck raises the river bed height, muddies the water and increases the frequency of cloudbursts, making it dangerous in case of flooding. Having witnessed the role played by heavy sediments in the flash floods of 2013 that resulted in huge destruction across the state, one would expect the authorities to be extra careful.

Midway through the 2018 monsoon, there have already been about a dozen cloudburst events across the state of Uttarakhand, according to a report compiled by South Asia Network on Dams Rivers and People (SANDRP). This includes a massive cloudburst in Yamunotri, at a time when the state has received 13 percent less rainfall than normal. Is it possible to navigate through this increase in unstable climatic events on an “all-weather road” without addressing the reasons that are creating these situations and will continue to in the future? It is a shame that there seems to be no indication of understanding from the state on the aspect of ecology, where ‘development’ will have inevitably have cascading effects. A clear example of this is the tourism driven construction boom in Uttarakhand that has severely stressed out local resources. The case of Shimla in Himachal Pradesh is a clear example of where things are heading if they continue to be unregulated. Even new tourism plans being developed by the state do not offer any hope.

Figures released by the Uttarakhand Tourism Development Board are available through a document on the MoEFCC website, which cites a study on the ‘carrying capacity’ of one of the Char Dham locations — Gangotri. Instead of discussing carrying capacity through a combined understanding of ecology and infrastructure, the interim report merely uses ‘number of beds’ available as a yardstick for arriving at final numbers. The Draft Tourism Policy 2017 by Uttarakhand Tourism predicts that numbers of visitors to the state will grow to about 50 million or five crores by 2025. Of this, over two crore tourists are expected to be visiting for religious purposes. View of the dense forest opposite Sukkhi village that is threatened in the original design of the Char Dham Highway Development Project. Photo courtesy Siddharth Agarwal

In the stretch along Sukkhi village, a bypass was proposed through the opposite mountain, making redundant the current road that passes through the village

These parts of the state are extremely prone to landslides and climate events. When I visited in 2017, leftovers from past incidents of landslides had still not been cleared. Treatment for landslides of some of these spots was still overdue, making the situation fragile and exposing both locals and pilgrims to risk.

Anthropogenic activities across the world have resulted in an increase in global temperatures. The world today recognises climate change as one of the biggest threats to modern day society and human survival. These factors are affecting our glaciers, with changes clearly visible in glaciers in all our river basins. One study suggests that the Gangotri Ggacier shrank by 4.4 ± 2.7 km2 (0.11 ± 0.07 km2 a−1) between 1968 and 2006, attributing it to climate change effects. All other glaciers in the region display similar trends of retreat. Our best defense in the face of such climate change effects is to preserve our old forests, allocate newer areas for forest growth and introduce regulation on consumption and construction.

The shrinking of the Gangotri Glacier has been attributed to climate change. Other glaciers in the region are similarly retreating 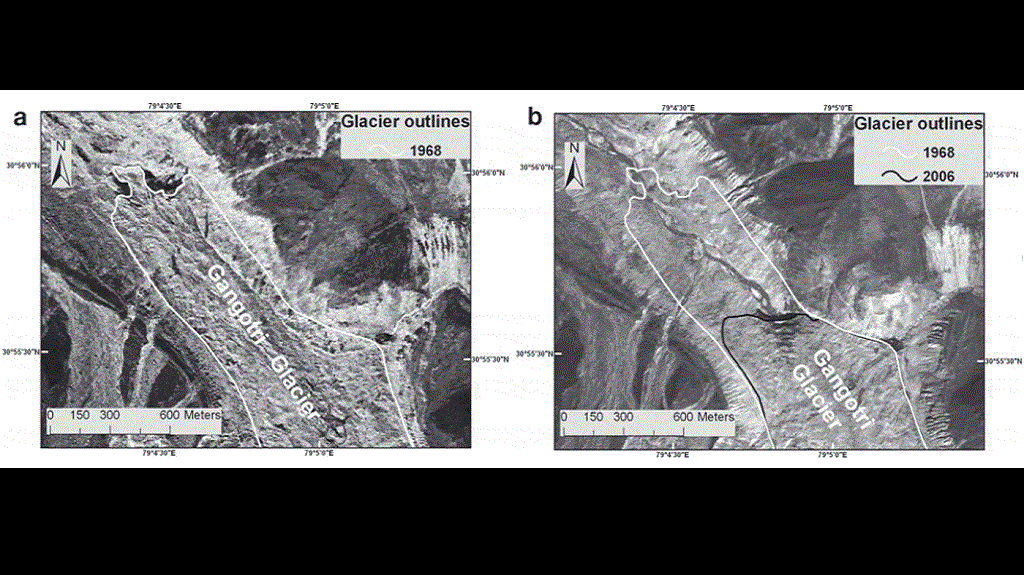 Frontal area images of the Gangotri glacier: (a) Corona image (27 September 1968) with same-year glacier outline, (b) Cartosat-1 image (11 October 2006) with glacier outline of 1968 and 2006. Image: Glacier changes in the Garhwal Himalaya, India, from 1968 to 2006 based on remote sensing. Image courtesy Journal of Glaciology

The combined results of unmindful work on the Char Dham Highway Development Project, unregulated tourism and the related construction boom will further impact what is already a severely stressed geography. In an attempt to accelerate work by bypassing norms and creating what is being pitched as an ‘all-weather road’, it appears that we’re driving full speed towards a cloudburst on an unstable hill road, forgetting to even honk or slow down on the blind corners.

Siddharth Agarwal has been walking across India, along rivers, trying to document and bring marginalised stories of people and the environment into the mainstream. He tweets @sidagarwal. You can see more  of his work at www.veditum.org