The ‘Grande Dame’ of multiplayer shooters is celebrating its 16th birthday this week. While the market is far more crowded today than it was back in 2003, the Call of Duty franchise has seen off more than a few would-be challengers. And despite losing its top spot to newer, trendier and more child-friendly titles in recent years, it remains one of the driving forces in online play — at least with the over-18 market.

The series has had its missteps to be sure, but it retains a core that has lasting appeal. Admittedly, I may be seeing the series through rose-tinted glasses since I literally grew up playing these games, and have been now for more than half my life.

Interestingly, the nostalgia is a major selling point for the newest Call of Duty. After apparently gauging interest with a remaster in 2016, the game’s creators have chosen to reboot one of the finest entries in the series. This year’s Call of Duty will be taking us back to the contemporary superpower struggles, Middle Eastern flashpoints and terrorism-fuelled urban violence that are the trademarks of a present-day Call of Duty: Modern Warfare setting…and, unfortunately, the trademarks of the present-day in the real world as well.

Thankfully, despite being a reboot, some of the best parts of the series will be making a return; specifically, the greatest sentient war-fighting moustache ever to be attached to a human being, Captain John Price.

Despite being a reboot, some of the best parts of Call of Duty will be making a return; specifically, the greatest sentient war-fighting moustache ever to be attached to a human being. 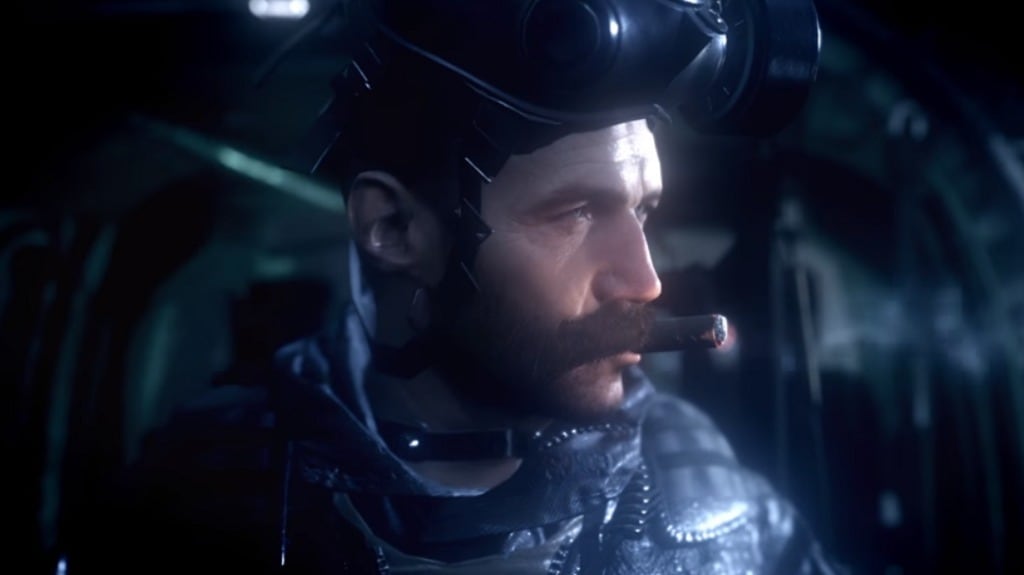 Even more than great facial hair, what I’m really looking forward to with this title is that this is the first Call of Duty to implement cross-play, which means that now PlayStation 4, Xbox One and PC players can play on the same servers. Who knew a game about war would be the one to finally bring us all together?

It’s been a rough week over at Activision Blizzard. After the company made efforts to appease China and censor players voicing support for pro-democracy protests in Hong Kong, they were accused of putting profits ahead of their ethics (because that’s exactly what they did).

The company’s public image has taken a massive hit over the last couple of weeks and its PR team will be looking for something, anything to change the news associated with their brand that has come under heavy criticism from… pretty much everyone except the Chinese government.

Whether or not those new headlines offer any consolation would depend on the newest Call of Duty being good and selling really well — which, if previous instalments are anything to go by, may prove to be a bit tricky.

Like a latter-day Roman Empire, the Call of Duty series has been on a steady decline for years. Today, it is beset on all sides by Fortnite, PUBG (kind of), Battlefield, Anthem (Nah, just kidding!) and every other pretender to the action-shooter throne. These days, it feels like the launch of a new Call of Duty inevitably leads to the usual announcements of “disappointing” sales figures, in turn leading to a stock market hit for the publisher, Activision Blizzard.

That’s not to say Call of Duty isn’t profitable. 2018’s Black Ops IIII (which is not written as Black Ops IV for some reason) made over a billion dollars in just its first month on sale. But while most games makers would be deeply envious of such numbers, it did sell several million fewer copies compared to other instalments; possibly as few as 14.3 million units compared to the 30.71 million units it sold for its 2011 counterpart. As an aside, it’s really indicative of the strange times we live in when a video game that made well over a billion dollars — and still pulls in more every day with extra content and nefarious but highly profitable micro-transactions — can be considered a financial “disappointment”.

Of course, while a return to the Modern Warfare franchise is certainly welcome, it’s hard to ignore the palpable sense of desperation from the publisher. After peaking in 2011, several underperforming titles with fairly un-innovative gameplay and some plotlines ranging from weak to rubbish, Activision needs a hit. Call of Duty: Ghosts, Advanced Warfare and Infinite Warfare were all pretty terrible…which was especially bad for me because I bought every single one of them and also love near future sci-fi. I was really looking forward to Infinite Warfare in particular and it was the absolute worst in the series’ decade-and-a-half history by my reckoning. Still, at least I got to kill a pompous, evil Kit Harington…so that was good I guess.

(Hopefully) the best kind of nostalgia

Soft reboots are all the rage in Hollywood and have been for a few years (even though most studios can’t seem to agree on what exactly a ‘soft reboot’ even means). So, it’s not really that surprising that major game publishers would attempt to do the same thing; particularly since, unlike Disney, they don’t have the option of putting out a terrible “live-action” version of classic animated hits for an easy and unearned windfall.

Now reboots often mis-fire, so it’s still a risky move for Activision to imperil the prestige of its premier franchise this way, but it’s just crazy enough to work. Over the years, the various studios behind the many, many, many games that make up the Call of Duty line-up have tried going into the future and back into the past to reexplore the series’ roots in World War II. But the franchise has always seemed to be at its strongest when the series stayed within more contemporary settings. The three Modern Warfare games are also among the most popular in the franchise’s history, with the first Modern Warfare bringing the previously rather small title to global prominence back in 2007 and the third instalment selling more than any other Call of Duty.

Of course, some of you older readers may recall, Modern Warfare is also the series to get the most negative attention from the government and media, both intentionally and unintentionally.

A penchant for courting controversy

Most quarters would condone (if not actively support) depictions of Nazis being killed during World War II. And killing robots and neo-Nazi-equivalents in the far reaches of space can probably be counted on to evoke a non-reaction from the average observer. But Modern Warfare and the events it portrayed made people uncomfortable. With the Modern Warfare games, you would play as a US Marine dying in a nuclear strike that killed over 30,000 of your compatriots along with most of the population of a fictional and forgettably-named Middle Eastern city. 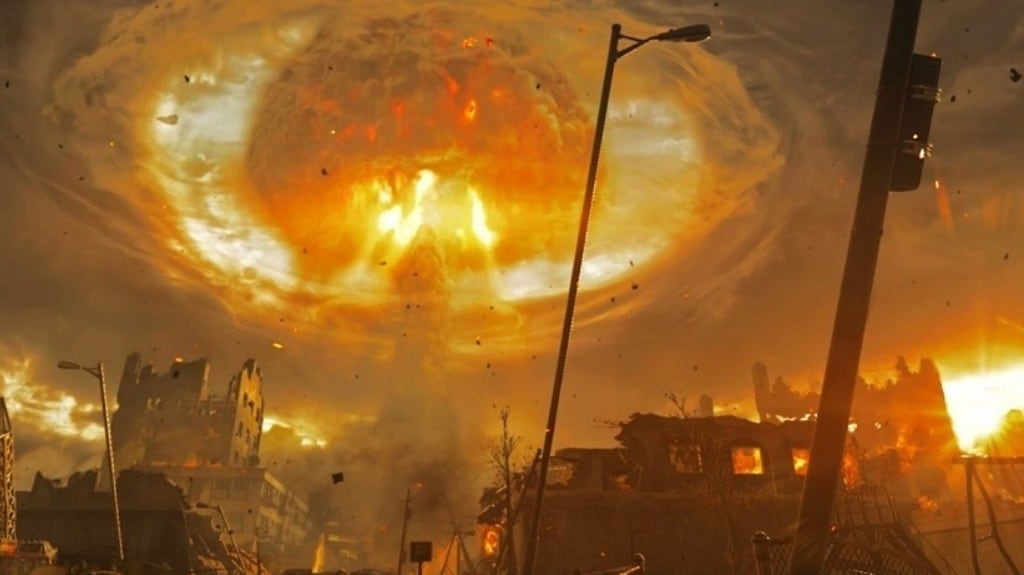 To my mind, this is still one of the most memorable moments in gaming | Infinity Ward/Activision Blizzard

With the Modern Warfare games, you would play as a US Marine dying in a nuclear strike that killed over 30,000 of your compatriots along with most of the population of a fictional Middle Eastern city.

You would be one of the trigger men for a massive act of terrorism that started a war, gunning down unarmed Russian civilians in an airport as they cowered, hid or fled. You and your team would fail to stop a chemical weapons attack on downtown London (along with many other major urban centres of Europe).

As you can expect, that whole ‘being a terrorist’ thing, didn’t exactly go over too well with a lot of mainstream media who were filled with righteous indignation (often while showing the videos of the most offensive parts of a game rated 18+ to the general public which was, looking back, a fascinatingly tone-deaf way of going about condemning such depictions of violence.)

It also marked the Call of Duty series being used as a convenient scapegoat for gun violence to distract the public — an easy strawman held up by politicians too ignorant or in bed with far too many lobbyists (or both) to even think about undertaking anything as gauche as actually doing their jobs and working proactively towards the public good.

The Call of Duty series was used as a convenient scapegoat for gun violence — an easy strawman held up by politicians to distract the public.

Amazingly by some accounts, it appears that Modern Warfare’s creators (Infinity Ward) have looked back at the series’ history of controversy and thought long and hard to themselves… “How can we top that?”

From the accounts of those who have seen early footage and gameplay of the title, controversial actions and shocking consequences play an even more central role in the game this time round. Previous titles allowed players to skip the most egregious sections and you had to manually opt in to experience them. Some even claim the game may go too far in places. However, since the game has not released yet, it’s hard to know if these claims have merit.

For my money, I think the content seems more disturbing because Infinity Ward is pressing a stronger anti-war message than Call of Duty games generally allow for — something perhaps more spiritually linked to Spec Ops: The Line, a subtly brilliant game disguised as a mediocre action-shooter. Unfortunately, it was a disguise so good most people never bothered to play it.

Then there’s the other controversy

I am of course talking about loot boxes, because today it’s apparently impossible for a major publisher to be satisfied with billions in revenue. No, a game that you pay full price for (about Rs 4,500/$60) isn’t enough unless you add enough micro-transactions to turn every product into a potentially bottomless money pit that players with addictive personalities can fall into.

Welcome to the future of gaming everyone. It’s terrible! (Love that like-dislike ratio) | 2K Games/ YouTube

To be fair, at least Call of Duty is rated 18+, so only adults are supposed to play this game. And as of writing this, Activision Blizzard have actually eased off on loot boxes, opting instead to implement the much more in-vogue premium pass system that offer rewards without the much maligned gambling mechanics of loot boxes.

But before you feel too relieved, it’s worth mentioning that from the wording of their announcement, it seems like loot boxes may only be gone for now and there’s always a chance we may see them again in the future.

So is this the equivalent of a greatest hits album put out by a greedy, rights-retaining publisher to squeeze every last dime out of a dying property or could it signal the start of a fresh, refocused direction that will breathe new life into the series? It’s hard to say, but the cynic in me fears that despite the best efforts of all involved, old Captain Price is just going to be another line-entry added to the ever-growing list of characters, destinations and time-periods that have failed to help it turn things around.

But hey, I’ve been wrong before.

Thankfully we won’t have to wait for long to find out for certain, Call of Duty: Modern Warfare releases on Friday, 25 October (and possibly a few hours early for those of us in the Eastern hemisphere).