It is just the beginning of summer. The mercury in Lalitpur — one of the drought-prone districts of Bundelkhand, a region divided between the two states of Uttar Pradesh and Madhya Pradesh in India — is already touching 42 degrees Celsius. Water has evaporated from ponds and tube wells in most areas of the southern part of Jhansi, the largest city in Bundelkhand.

Rampyari, a resident of Rajpur village in Talbehat tehsil of Lalitpur, Uttar Pradesh, which is around 600 kilometres from Delhi, makes five to six rounds daily to the only hand pump in her village to fetch water. The hand pump is about a kilometre from her home and her rounds start at 4 am.

“Water is the most precious item here. This is the first thing which comes into our minds as we go to sleep and when we wake up,” an exhausted Rampyari told Mongabay-India as she filled her vessels under the scorching sun after harvesting the wheat in her farm.

Ganeshi, who lives in Gulenda, a village close by, echoed her sentiments. “This water crisis has made our lives miserable,” she said.

The same story plays out in Ratanpur and Rasina villages of Babina Tehsil of Jhansi district in Uttar Pradesh during summer, when most hand pumps, wells and ponds go dry.

Like in most parts of rural India, it is mainly a woman’s job to fetch water in the Bundelkhand region, which is spread across 70,800 square kilometres and comprises 13 districts — seven in Uttar Pradesh (Jhansi, Jalaun, Lalitpur, Hamirpur, Mahoba, Banda and Chitrakut) and six in Madhya Pradesh (Datia, Tikamgarh, Chhattarpur, Damoh, Sagar and Panna).

In most Bundelkhand villages, women fetch water four to five times a day from hand pumps installed at least 1-2 km away from their homes 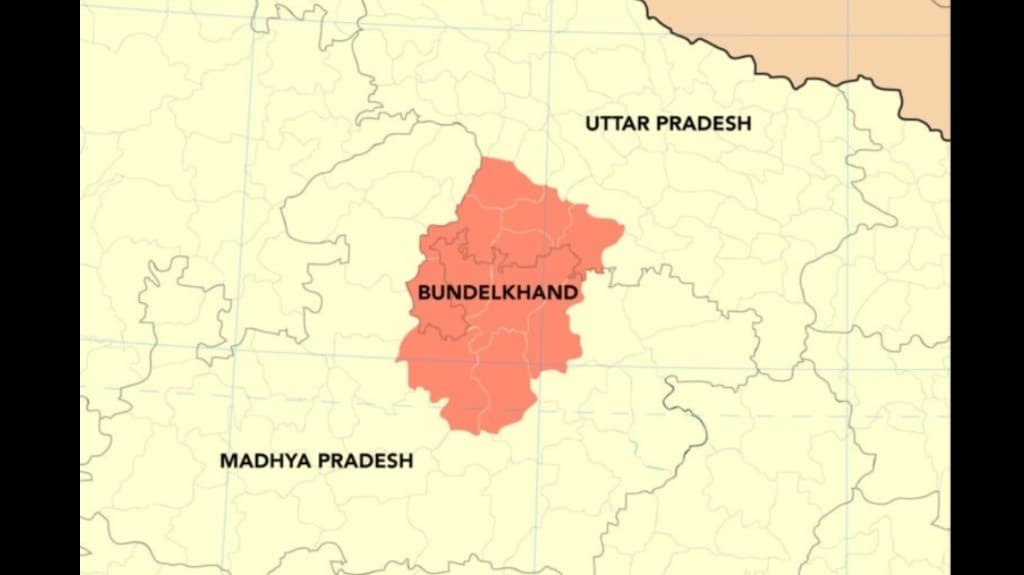 Bundelkhand is divided between the two states of Uttar Pradesh and Madhya Pradesh. Map by Planemad/Wikimedia Commons.

Men, mainly small farmers, struggle to arrange for water for agriculture as irrigation facilities are unavailable in most parts of the rocky terrain. They sow just one crop (wheat) and then end up working as unskilled labourers in cities to make ends meet.

Pushpa Rai, a resident of Mastapur, Jatara Tehsil of Tikamgarh (Madhya Pradesh) who fetches water from a hand pump two kilometres away from her home, says, “Parties don’t talk about our plight when they campaign. We are simply reduced to numbers in the vote count.”

Not an election priority

Bundelkhand has traditionally been a bastion of the Samajwadi Party and Bahujan Samaj Party, but in the 2014 Lok Sabha elections, the Bharatiya Janata Party swept the elections winning all eight parliamentary seats across two states with the promise of development.

Uma Bharti, the former chief minister of Madhya Pradesh, who won Uttar Pradesh’s Jhansi seat in 2014 and became senior minister in the Union government had also promised separate statehood for the region. Five years down the line, neither water crisis has been improved in the region nor it got statehood leading to huge anti-incumbency, say locals and activists.

The general elections were around the corner when Mongabay-India travelled through the area in early April, but there was no sign of any political activity in rural areas.

Most households in Rajpur and other dry villages of Lalitpur are under lock and key. Some have only kids or the elderly left. With no guardians around, the education and health of children get compromised and the vicious cycle of poverty goes on.

According to 60-year-old Virendra Saharia of Gulenda in Talbehat, Lalitpur, there is no employment in the village. “Even jobs under the Mahatma Gandhi National Rural Employment Guarantee Act (MNREGA), which promises at least 100 days of unskilled work to every rural Indian, are not there. My wife, son and daughter-in-law stay and work in Indore city to earn money.”

The situation is worse for cattle. Mongabay-India was witness to three cows breathing their last in Rajpur. Cattle carcasses were spotted all over Mastapur in Tikamgarh.

The situation is worse for cattle. We witnessed three cows breathing their last in Rajpur.

It is a man-made drought, say experts

“Most reservoirs and dams were overflowing. The situation in some areas even demanded helicopters rescue operations,” says Kumudlata Srivastava, commissioner of Jhansi division, which includes Jhansi, Jalaun and Lalitpur districts.

Clearly, conservation measures and rain harvesting in the region are inadequate.

Sanjay Singh, the founder of Parmarth, an organisation working on rainwater harvesting projects in nearly 500 villages across Bundelkhand, says, “Most rivers, wells and ponds have dried up due to poor water management. Groundwater has depleted over the years due to a lack of effort by the administration to take up water recharging.”

The Centre had provided a relief package of Rs 7,200 crores for the region between 2010-2015, which helped improve the irrigation and tap water system to some extent.

“No new projects have been approved. The plan to link the rivers Ken and Betwa has barely moved over the years,” he added. The Ken-Betwa linking project aims to transfer surplus water from the Ken river to the Betwa basin, to help drought-prone Bundelkhand.

In fact, water scarcity is the root cause of the many woes plaguing the region, such as poverty, farming crisis, debt and unemployment, say the villagers. Meanwhile, a bill to protect groundwater is pending for approval in UP.

According to UP’s groundwater department officials, 20 blocks in the region were in the ‘critical’ category in the year 2000, in terms of water scarcity, primarily due to overexploitation of groundwater and lack of rainwater harvesting. The number went up to 173 in 2013, when the last assessment was made.

The region might experience worse days ahead as the United Nations Institute for Training and Research has predicted a 2 to 3.5 degrees Celsius rise in temperature in Bundelkhand by end of this century.

Water scarcity is the root cause of the many woes plaguing the region, such as poverty, farming crisis, debt and unemployment, say the villagers

Villagers say that the mismanagement of water and the resulting water scarcity is their main concern. Photo by Kanchan Srivastava.

“No government has done anything for us so far. Politicians fool the poor to come into power,” says 60-year-old Balkishan Ahirwar of Mastapur, claiming that over 1,000 cattle have died over the last three months due to water shortage in his village.

Although the BJP manifesto talks about ‘piped water connection for all’ by 2024 and the Congress promises to put water conservation at the heart of its programmes for agriculture, rural and urban development, there is hardly any discussion around the ground reality in Bundelkhand.

Debates in rural and urban areas are, instead, centred around emotive issues like India’s airstrike on Pakistan or caste politics. Brajlal Ahirwar, gram pradhan of Ratanpur and Rasina, says, “When people go to cast their vote, real-life issues take back seat and emotions take over.”

Does statehood for Bundelkhand hold the key?

Its complex geography and history have often been considered the reasons behind the huge developmental backlog in Bundelkhand.

“After the 1857 First War of Independence, which originated in the region, against British rule, the British neglected development as a punishment to the people. After Independence, the region became notorious for dacoits, which hampered development to a large extent,” said an official from the UP government, who requested anonymity. Bundelkhand is seen as a ‘punishment posting’ for government officials even now.

In most Bundelkhand villages, women make multiple trips in a day to a water pump kilometres away from their home. Photo by Kanchan Srivastava.

Amit Tripathi, a social activist who works for youth rights through his Bundelkhand Development Foundation, said “There are very few industries, good colleges or healthcare facilities here as a result of which youngsters flock to big cities for education and livelihood. Most of them never return.”

The continuous neglect eventually led to the demand for a separate ‘Bundelkhand State’ that reached its peak in 2013. BJP’s Uma Bharti even promised statehood for Bundelkhand within three years of the formation of the BJP government at the Centre during her 2014 election rallies.

“Bharti won the Jhansi parliamentary seat and BJP came to power at the Centre and in the state both she did nothing to grant Bundelkhand statehood. Fearing defeat, she backed out of the poll race the next time,” said Bhanu Sahay, a statehood campaigner, who ran a massive signature drive urging people to defeat Bharti. Bharti withdrew from the contest.

While activists believe that statehood will help address all the issues at hand, government officials disagree and insist that the administration is doing its best.

“The tapped water supply and irrigation system are being expanded. Water conservation is also being taken up. Upcoming projects like expressway and defence corridor and a few industries will address the employment issue,” divisional commissioner Srivastava said.

He is referring to the 296 kilometre long Bundelkhand Expressway, which is estimated to cost Rs 9,000 crores, recently cleared by the UP government; and a defence corridor, already approved, which aims to generate an investment of Rs 20,000 crore and create employment for 250,000 people.