There are laws but no implementation. The West Bengal government has notified a definite time period banning the fishing of juvenile Hilsa (jatka) to save the state’s favourite fish from extinction. But fishers do not obey the prohibition either in rivers or the sea.

As a result, the production of Hilsa (Tenualosa ilisha) in West Bengal is rapidly declining. Gourmands of West Bengal are now dependent on Bangladesh for large Hilsa.

From the estuary of the Ganga to deep in the Bay of Bengal, an estimated 14,000 trawlers are hovering in the migratory path of the Hilsa as the fish approaches the river to spawn, and on its way out. In spite of the ban on nets with mesh holes less than 90 mm in diameter, such nets are used most of the time. Some nets are over a kilometre long. A very large number of juvenile Hilsa are caught.

The damage is twofold – the possibility of getting large Hilsa in the future is reduced, and it hampers the reproduction of the fish. However, in the near absence of government surveillance, juvenile Hilsa fishing goes on in full spate. In order to increase the yield and production of Hilsa and other fish, the State Fisheries Department issues notifications every year to control fishing. According to these, from 15 April to 31 May, fishing is prohibited in the sea and adjoining areas. Moreover, a special ban is imposed specifically for the preservation of the Hilsa. From 15 September to 24 October, before and after five days of the full moon, catching any type of Hilsa is prohibited. This system was initiated for the undisturbed breeding of Hilsa. Besides fishing, selling, transporting and hoarding of Hilsa, less than 23 cm long Hilsa is prohibited. Bottom trawling is prohibited up to 12 nautical miles from the coastline.

Accepting that the ban is not obeyed by some fishers, State Fisheries Minister Chandranath Sinha told thethirdpole.net, “We try to teach about all kinds of fish under an awareness campaign for fishers. We hold seminars and open discussions with the marine and river fisher organisations. Most of the fishers obey the ban but some do not.”

Sinha said the Panchayats of the villages on the banks of the Ganga have been helping implement the ban on catching juvenile Hilsa.

But fisherman Dipankar Roy narrates a different story. He fishes with a small boat round the year in the Ganga near Barrackpore (25 km upstream of Kolkata). In his words, “I catch fish in the Ganga throughout the year. There are Hilsas also. Currently nets with very small mesh holes are used in large numbers. Some boats often hunt Hilsa weighing 8 to 10 grams, catching up to 6 kg in a day. Fishers know very well that the surveillance is inadequate. Some fishers use funnel-shaped nets (Binati Jal) to catch juvenile Hilsa and selling it in the name of Khoyra fish. In Digha estuary, this fishing of juvenile Hilsa is evident. If 500 kg of Hilsa is caught, 300 of that weighs 150 to 300 grams, all juvenile fish. A mature Hilsa weighs between 700 grams and a kilogramme.”

In the Bay of Bengal, fishing goes on throughout the year, ignoring government restrictions. Almost admitting this, the secretary of the trawler owners’ organisation United Fishermen’s Association Shyamsundar Das told thethirdpole.net, “Fish weighing below 300 grams may be hunted, but that does not matter. One Hilsa gives birth to some hundred thousand babies. However, we try to observe the prohibition on juvenile Hilsa.”

Further charges against the big trawlers are that they bring up all types of fish through bottom trawling. Catches of juvenile Hilsa weighing less than 10 grams are thrown back into the sea. The fish is being destroyed in this way.

Das says, “We have got the modern instruments and how is it possible that those will not be used?” At the same time, he accepts the need for the ban, and even wants it extended to the coast off adjacent state Odisha as well as the markets there. “Otherwise, nothing can be done. When sale of juvenile Hilsa is stopped at Digha market (in West Bengal), it goes to the Odisha markets. Then it reaches the markets of Kolkata.”

Artisanal fishers have a different take than the trawler owners. The joint secretary of small fishers’ organisation South Bengal Fishermen Forum, Debashis Shyamal, told thethirdpole.net, “Destructive fishing and trawl fishing hampers Hilsa in the state. Not only Hilsa, but all kinds of fish are declining due to uncontrolled fishing. We the small fishers try to obey the ban. But the big trawlers can break all the rules with the power of their political connections.”

It has been a longstanding allegation in all coastal states of India that trawlers are owned by politicians and their kin, directly or anonymously.

And not a single channel – deep or shallow – has any clean water. The pollution in the Lower Ganga is largely unchecked, and the bacterium E Coli (which causes diarrhoea or worse) has been counted at a million times the safe limit prescribed by the World Health Organisation.

That, and an overall lack of fresh water due to dams and barrages upstream in the Ganga basin, has a highly adverse effect on the reproduction of the Hilsa. The increasing salinity of the estuary is an added cause. The Hilsa looks for fresh water to spawn, but does not find any.

Asimkumar Nath, a fisheries expert in Sidho Kanhu Birsa University of West Bengal, has found another effect of this forced change in the life cycle of the Hilsa. Due to siltation, many fish find their way back to the sea blocked. Studies that include tagging some Hilsa have shown that some have remained in the Ganga and its tributaries for the last several years. He said some such “resident Hilsa” have been found as far upstream as Farakka, over 350 km from the mouth of the Ganga. Nath is confident that even if 20 percent of the Hilsa living and breeding in the rivers can be saved from overfishing, there will be no shortage of the fish in West Bengal.

Though its current plans to protect the Hilsa are yielding limited results, the West Bengal government has new plans to protect the fish. Fisheries Minister Sinha said his department has identified three spawning areas that will be declared sanctuaries. “Special monitoring will be arranged in Raichak-Godakhali, Tribeni-Balagarh and Lalbag-Farakka,” he told thethirdpole.net. “Hilsa lays eggs in those places. Hilsa Research centres will also be built there.” 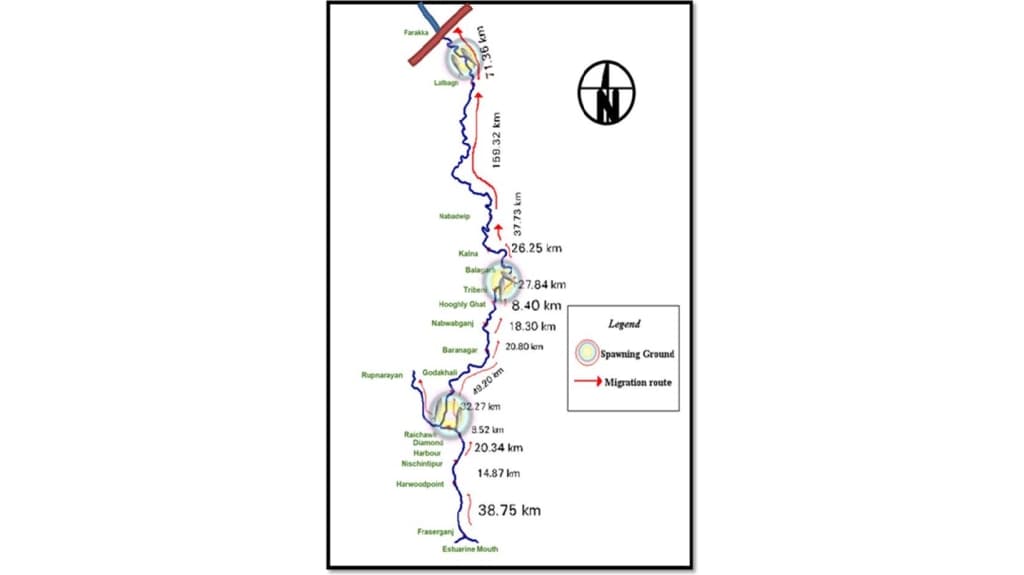 (map not to scale)

The minister said scientists are trying to breed Hilsa in ponds. “The Hilsa Conservation and Research Centre (HCRC) in Diamond Harbour will move that work forward. Nofima, a Norwegian institute for food, fisheries and aquaculture research, will work with HCRC. Nofima has been working on salmon production for 45 years and they have expertise in aquaculture. Central Inland Fisheries Research Institute (CIFRI) is also a partner in this project. Six water bodies have been identified in Falta near Raichak and East Kolkata Wetland to conduct the research.

Nath says, “There is no necessity to spend a huge amount of money to artificially breed Hilsa in ponds, if the juvenile [fish] are saved by increasing surveillance.”

Ecosystems for Life, a Bangladesh-India transboundary project by the International Union for Conservation of Nature (IUCN), had catalysed the regulations and agreements for sustainable Hilsa fishery in both countries. Since the conclusion of that project, IUCN has continued to work on associated issues in the same region in partnership with The Asia Foundation, as part of the South Asia Water Governance Programme of the Department for International Development, Government of UK.