On the morning of 21 February, 2018, Manvir Singh, 32, a farmer from Andana village in the Sangrur district of Punjab, left early from home for his farm. When Manju, his wife, went to the farm at noon to collect fodder for the cattle, she found he had hanged himself. Two years ago, Singh had taken a loan of Rs 400,000 to drill a tubewell for his field and had been under pressure to pay it off.

“If only he had talked to us about it, we could have found a solution. But he kept it to himself,” said Manju, sitting in the sunlit verandah of her home, a structure which has been left unfinished after her husband’s death. A huge pile of bricks lies at the entrance, next to the cattle shed. “I have to take care of the children, my mother-in-law, the cattle, the house. I am sad and exhausted,” she sighs, hurriedly dabbing her eyes and putting on a brave smile in front of her younger son, who’s just came back from school. He still believes his father is gone away for work.

Before the tubewell was installed, Singh used canal water for irrigation. It was accessible once a week but had started to dry up. Sangrur has been classified as a “dark zone”, where water has been over-extracted and fallen below 200 feet. In most villages, farmers claim, the water table is between 350 to 500 feet. “Everyone got a tubewell in our village and we had to get one too. I wish we had not; he could have been saved,” said Manju. 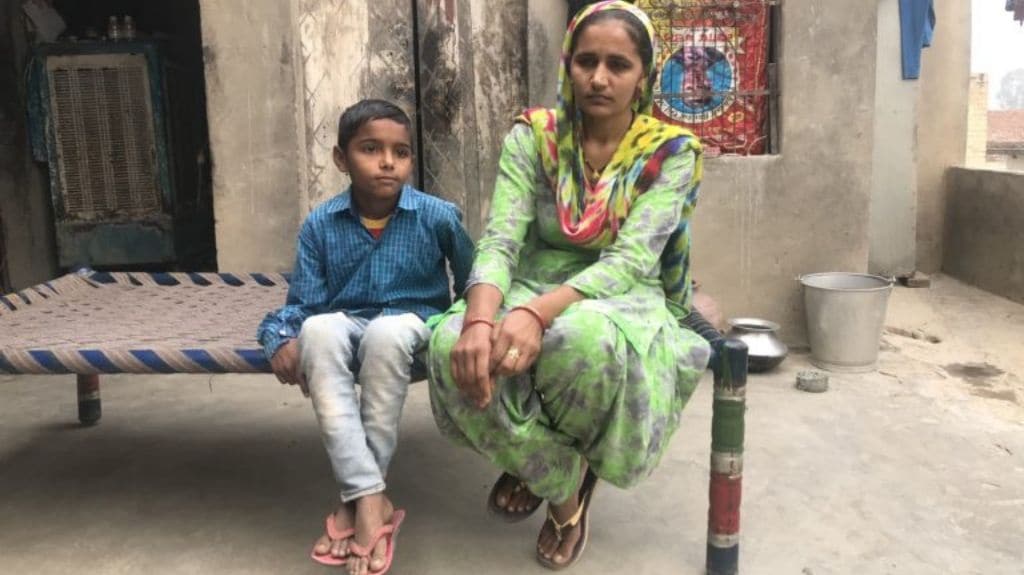 Manju Singh of village Andana in Sangrur with her son Kapil. Her husband Manvir Singh committed suicide after he couldn’t pay his tubewell loan. Photo by Sunaina Kumar.

Sangrur is one of the worst affected by the groundwater crisis in Punjab.

Across Punjab, farmers like Manvir Singh have been taking loans to install tubewells due to the scarcity of water despite not being in the position to repay them in time. As water levels fall further, the cost of drilling a tubewell goes up, adding to the overall rise in the cost of cultivation, forcing small and marginal farmers into a cycle of debt. Aquifers across the state too have been all but depleted.

A recent draft report by the Central Ground Water Board (CGWB), the central government’s groundwater monitoring agency, has warned of a dystopian future for Punjab. At the current rate of extraction of its underground water resources, Punjab will soon be a desert state, as “all available groundwater resources till the depth of 300 meters (about 1000 feet) in the state will dry up in 20 to 25 years,” a news story quoted the report as saying.

“This report is a warning to us. The situation in the state is critical and cannot be ignored,” said AK Jain, professor of soil and water engineering at Punjab Agricultural University in Ludhiana.

In the land of the five rivers, Jhelum, Chenab, Ravi, Sutlej, and Beas, where the great big canals of independent India were built to support the Green Revolution of the Sixties, a huge water crisis looms large. According to CGWB, 110 out of the 138 blocks in Punjab are ‘overexploited’ — a category that defines underground water resources as being under great stress, requiring intensive monitoring and evaluation, and with no scope of further groundwater development.

“Groundwater should be available at 50 to 60 feet below the ground. In Punjab it’s drastically fallen to 150 to 200 feet,” said Indian Institute of Technology, Kharagpur, professor Abhijit Mukherjee, who recently conducted a study in collaboration with the CGWB and the National Aeronautics and Space Administration (NASA), USA, that warns of a greater risk of “groundwater drought” in states like Punjab, Haryana, Assam, Uttar Pradesh in summers. His work links the depletion of groundwater to severe shortages of drinking water and an impending food crisis.

Genesis of the crisis

There has been a steady increase in dependence on groundwater in Punjab since the government introduced power subsidy for farmers in the 1990s. Until then, nearly 42 percent of the cultivated area in the state was irrigated by canals. Now, nearly 72 percent of the land is irrigated by tubewells and 28 percent by canals. The number of tubewells has gone up from 190,000 in 1980 to 1.41 million in 2015-16. Quite tellingly, about 1.2 million of these are electrically operated to avail of the subsidy and the rest run on diesel.

In central Punjab, the water table is falling at an alarming rate; the extraction far exceeds the recharge. “The quality of the water is worrying us as well. We have been finding traces of arsenic and emerging contaminants like nitrate and sulphate,” said Gopal Krishan, a scientist at the National Institute of Hydrology, Roorkee. Krishnan has been researching groundwater in Punjab for an ongoing project for the institute.

Emerging contaminants are chemicals that are emerging from agricultural sources like pesticides and fertilisers, and urban pollution. Many of these are carcinogenic and associated with various health risks.

“My father used to irrigate the land with canal water but the canals are running dry and most of Punjab’s canal water goes to Haryana and Rajasthan,” said Singh, who is also an activist working to raise awareness on the water crisis in the state. “Farmers are blamed for depleting Punjab’s water. Our water was taken away and given to other states and we were forced to grow rice, which consumes water like a fish.”

An overdependence on paddy

The rampant extraction of water is one of the consequences of the Green Revolution, which led to Punjab shifting from a diversified cropping system of wheat, maize, pulses, and vegetables to monoculture farming of wheat and paddy. Paddy cultivation was further incentivised with the state policy of free power.

Paddy is a great guzzler of water. Research has shown that it takes more than three times the water to grow paddy in Punjab compared to the flooded plains of Bihar or West Bengal. Of the total 5 million hectares area under cultivation in Punjab, rice (paddy and basmati) takes up nearly 3 million hectares, in contrast to 283,000 hectares of cotton and 123,000 hectares of maize.

The government has been promoting crop diversification but farmers are reluctant to adopt it. Ironically, Gurpreet Singh too grows wheat and paddy, which are procured by the government. “We can’t shift to other crops until the government gives us minimum support price and assurance of procurement.”

All across the state, farmers raise the same issues. A farmer in Mansa district, associated with a farmers’ union said, on condition of anonymity, “It takes 5,500 liters of water to grow one kilogram of rice. I don’t want to grow it; it’s not like I even make a profit with it but it protects me from loss.” He has drilled a tubewell 580 feet deep after he couldn’t find water at 120 feet. Another farmer in Mohali, who has gone down 800 feet, said, “Humein marne se koi nahin bacha sakta (no one can save us from dying).”

Also read: Our deep-dive into the Chennai water crisis

As in the rest of the country, these issues are deeply political. The government cannot reduce the power subsidy without losing its voter base. The date for transplanting paddy is announced by the government ever since the enactment of the Punjab Preservation of Subsoil Water Act in 2009. With elections this year, the Punjab government allowed the paddy sowing date to be advanced to 13 June to appease farmers. Last year it was 20 June. The delay helps in reducing the pressure on groundwater resources, by allowing the use of more rainwater instead. Agricultural scientists have warned of a severe depletion in groundwater this year as monsoon is not expected till the end of June. Meanwhile paddy sowing is already on in full swing.

The water footprint for rice production in India is the highest in the world. Rice has traditionally been cultivated across the country with flood irrigation. “Our irrigation patterns have not changed for centuries. We can’t afford to do that anymore. We need to adapt modern micro-irrigation methods like drip and sprinkler,” said Mukherjee. Drip and sprinkler irrigation can save up between 40 to 80 percent of water. However, the total area under micro-irrigation in Punjab is less than one percent. From this year onwards, the state government is aggressively promoting micro-irrigation in maize and cotton farming.

But will that be enough to change the course of desertification of Punjab? A government official said on condition of anonymity, “The programme for crop diversification has not taken off and micro-irrigation will not address the magnitude of the problem. We need to make water an economic good by removing the power subsidy. We need to involve the community and create mass campaigns on water. If the central government were to withdraw the support it gives to paddy and at the same time create an enabling environment for other crops then maybe we can make a difference. Until then, things will only get worse.”