Yiyun Li on winning the Windham-Campbell Award, her body of work: 'A writer has to be able to live in an almost homeless mind'

For Yiyun Li, writing is much more than simply telling a story. It is about having a conversation with someone else’s writing and establishing a dialogue through her work with the writers she enjoys reading.

A MacArthur ‘genius’ as well as the recipient of several literary accolades such as the PEN/Hemingway Award, Li has recently added another feather to her literary hat on winning Yale University’s Windham-Campbell Award for Fiction along with Zambian writer Nampwali Serpell. Of a total of eight awards given away each year, the 2020 edition witnessed seven women take home the sumptuous £165, 000 purse awarded to each winner.

“I was in my car waiting to pick up my child from school, and I was excited, thrilled, incredulous, and of course feeling very lucky and honoured,” says Li, recalling the moment she found out that she had won the prestigious literary award, which follows an anonymous process where the jury and the nominees remain a secret even after the prizes have been declared. Through her works, Li brings forth the turbulent period of the Cultural Revolution in China while also exploring, as a writer, a way to converse with passages from the works of authors she enjoys reading.

On winning the Windham-Campbell Award, Li had said: “Writing is a solitary activity; each book is a message sent out in a bottle. And one day, a phone call, coming out of the blue, tells an astonishing story of those bottles’ journey not known to the sender: they have arrived, and they are in good hands.”

Li’s literary career spans over nearly two decades, however, when she first left her home in China in 1996, it was to arrive in the United States as a student of immunology at the University of Iowa. The shift from science to writing was born out of her quest to find something less certain and unknown, an idea which was further thrust into sharp focus with the looming uncertainty of her immigration status.

“I loved immunology, and I loved my experience as a scientist, but when I was in my late twenties, I could see my entire life unfold in front of me if I followed the scientific career,” she recalls. Then, thinking ‘what could the least certain thing be, then pursuing a writing career?’ she enrolled for a Master of Fine Art (MFA) in Creative Writing at Iowa which led up to her MacArthur Fellowship, book publishing deals and her first collection of short stories, A Thousand Years of Good Prayers (2005).

Oscillating between China and America, the stories explore a mixed bag of characters: a pregnant woman who takes a bus from Nebraska to Chicago to get an abortion; the lookalike of a Chinese dictator who seeks redemption by going to extraordinary lengths; and the protagonist of the title story, a retired rocket scientist who visits his daughter in America and ends up forming an unlikely friendship with an Iranian woman in spite of not sharing a common language.

Through her works, Li brings forth the turbulent period of the Cultural Revolution in China. Her debut novel The Vagrants, tells the story of a provincial town, Muddy River, in which a young woman is about to be executed for dissent in the late 1970s. In her stories, the author speaks of the oppression and turmoil the revolution left behind in its wake but simultaneously manages to delve deep into personal relationships, capturing her characters in their struggles to cope with the undesirable situations they are caught in.

Yet, even as Li's work is set as much in China as in America, she continues to have a complicated relationship with the country and maintains that she would rather not have her books translated into Chinese. This and her relationship with her family, particularly her mother, are part of the subject matter of her memoir, Dear Friend, From My Life I Write to You in Your Life. The collection of essays, which borrows its title from one of Katherine Mansfield’s journal entries, was written following the Chinese-American writer’s breakdown in 2012. In the summer and autumn of that year, she tried to twice kill herself and the contemplation that came after, translated into her first autobiographical work. 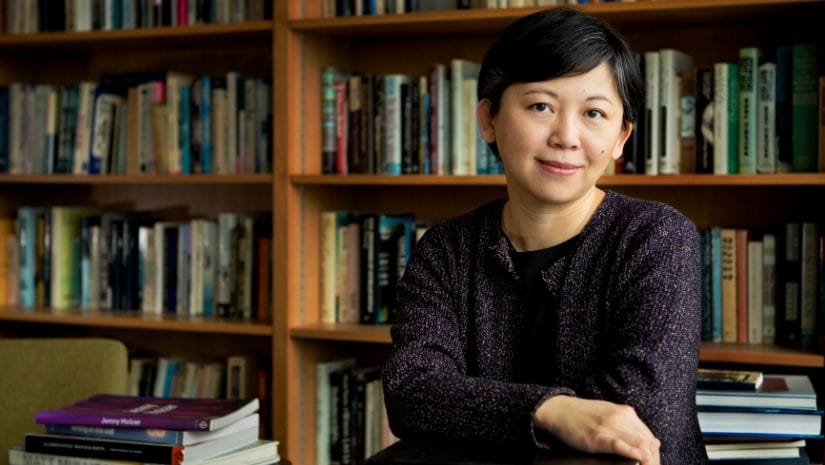 In her 2019 work, Where Reasons End, the Windham-Campbell Award-winning writer Yiyun Li, writes an imaginary conversation between a mother and her teenage son who has committed suicide. Image courtesy: Denise Applewhite/ Princeton University

The book, she opines, “is less about my life but about my reading life, and I consider that writing non-fiction is a way to clear my mind and to make some space for my fiction.” In keeping with this purpose, the memoir is in a way a commentary on passages from the works of some of her favourite writers including Ivan Turgenev, Thomas Hardy and Elizabeth Bowen.

As well, what she also writes about is how she wished to escape from the darkness brought on by the Tiananmen-era in Beijing and more prominently, her desire to free herself of the Chinese language. Li’s writing is transparent in this regard, so much so that in A Thousand Years of Good Prayers, a daughter tells her parent that speaking in English makes her feel like a new person.

Particularly poignant passages in her memoir are those that divulge her difficult relationship with her mother and how utterly impossible it was to escape from the pain she was trying to leave behind. “Family,” the author remarks, “is one of the first and one of the most everlasting factors forming everyone's life (and for some, lack of a family).”

But when asked if the escape she was looking for in her move to America ever leaves her with a sense of alienation from her roots, she points out, “I try not to think whether I feel alienated or not from my roots; I don't feel a strong longing for anything that would call itself a home. A writer has to be able to live in an almost homeless mind, at least, that is how I feel.”

Currently a professor of Creative Writing at Princeton University, Li has worked with short fiction, non-fiction and longer novels, each having its own distinct narrative structures. However, she remarks that there may not be a major difference between writing short stories and writing novels. “The lengths are different,” she says, “but one's responsibility to the character, whether s/he is in a story or in a novel, is the same.”

In 2019, Li published her latest work, Where Reasons End, an imaginary conversation between a mother and her son, who kills himself. The author lost her own teenage boy to suicide and in this book builds up a conversation between a precocious son and his mother unravelling, over what would seem simple questions or discussions of normal, quotidian life, the suffering of her characters.

While Where Reasons End has been categorised as autofiction, the author herself says that it was written during a specific moment in her life for a specific reason which was “to find words for what words cannot say.”

In borrowing the title from Argue, a poem by Elizabeth Bishop’s she drives home the point that “in the end when we write, we are always trying to reach a place beyond any reason.”