When punctuation makes a fine point: The comma can go, but not the stop

A learned professor of linguistics, David Crystal, of University of Wales, Bangor has asserted that the full stop — the point one puts at the end of a sentence to signify the sentence has ended, may be dying. Reporting it, The New York Times emphasised the punctuation in the headline itself thus: Period. Full Stop. Point. Whatever It’s Called, It’s Going Out of Style

By convention, headlines do not use the full stop, hence when quoted, I too did not in the preceding paragraph, but the finicky traditionalists would frown at it. How can sentence be ended without it, when it is a quoted headline, and not the headline itself? Every other punctuation mark can be found in headlines, but not the stop. Some tabloids do use even the exclamation mark! 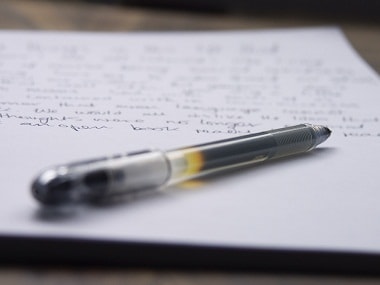 Is the full stop, the point, the period — really going out of style? Photo courtesy freeimages

That is what makes languages fun, as long as one has got a grip on it. However, I would not worry too much about it. For what Prof Crystal so far has found is that the full stop, or the point, or the period is not being used in text messages, generally. Nor, even when the messages are single-word sentences. They have not shown an inclination to slowly evaporate from written English. If they do, there could be hell to pay.

Here’s one personal example. Let me hark back to 25 September 1990, when Lal Krishna Advani started on his Rath Yatra from Somnath, and which turned the politics of the country upside down,
and defined the communal fault lines very clearly. Covering it for The Hindu, I waited till we reached Rajkot, and broke off to file a report by telex. Those days, the Post & Telegraph charged Rs 5 per minute of transmission time, and we had a credit card-type of arrangement, as did all newspapers.

Those were the pre-email, whatsapp, and mobile phones days, all of which enable instant messaging, and major newspapers had taken themselves out of depending on news dispatches only by telegram.

It is yet another matter that my reports had been sent from what in those were days were boondocks by Morse Code. More of that ancient thing some other time, lest we move away from the business of the full stop.

Newspapermen and telegraphists and telex operators at the P&T had happy relationships, especially because the guy at the machine got to read what would be printed elsewhere the next day. There was no 24x7 news television — if you believe that they purvey only news which is of use to the people — and sometimes a travelling journalist even received the courtesy of a cup of tea from those nicely hospitable blokes.

To save on time to which the charges were tied, unlike telegraphy where it was per word, the practice was to punch it out on a tape where a permutation and combination of five holes alongside — just one or all five or some of them — which was fed into the machine later. After handing over my copy — text of the report to non-journalists — to the operator, I left for my lunch. On return, he gleefully told me he had saved me some money: by eliminating all the punctuations.

All punctuations, which meant full stop, comma, and even the inverted commas were missing. By the well-meaning but foolish man’s reckoning, he had saved at least Rs 5 — a full minute’s transmission time. I grabbed the message as typed and as its author, just could not make head or tail out of it. Imagine the explosion in the newsroom back in Chennai when it landed as clear gibberish.

It dawned on me that the missing punctuation mark, the oldest in the world perhaps when multi-sentence writing emerged, still has a role to play. Moses’ Ten Commandments can be as clear as the learned professor’s name, but there, by indenting each of the lines, he (Moses) may have escaped the need to look for a punctuation mark. Happily, the full stop is missing only from small texts transmitted over the cyberspace.

Not even the type one gets in poorly written stuff. Any stuff. Period.