The many faces of Sita and Shankuntala: Uma Chakravarti on the need to look beyond patriarchal interpretations

In his seminal essay — Is There an Indian Way of Thinking? — AK Ramanujan suggests that if there is to be a distinctly Indian way of thinking, it lies in the fact that whatever can be said of India, the obverse is just as true. When Uma Chakravarti, noted feminist historian and activist, expounds on the many avatars of Sita and Shakuntala beyond their orthodox, conventional faces, this sentiment can be deeply felt.

Chakravarti's documentary Ek Inquilab Aur Aaya, which recreates the Lucknow of the 1920s-1949, chronicling the 'quiet rebellion' against patriarchy by two Muslim women — Sughra Fatema and her niece Khadija Ansari — released just a few months ago. In January 2018, she contributed to 'Towards a People’s Cinema: Independent Documentary and its Audience in India', edited by Kasturi Basu and Dwaipayan Banerjee. Chakravarti traced the history of the independent documentary in India in her segment.

However, it was neither her documentary nor the publication that Chakravarti discussed at a recent conference in a Delhi college. Instead, she dwelt on Sita and Shakuntala, and how an understanding of them was crucial to the development of Indian feminism. Chakravarti spoke nostalgically of the heady 1970s, when both she and India, had a critical feminist awakening that the postcolonial circumstance demanded. It was premised on the radical juncture inspired in due measure by the second ‘wave’ of Western feminism marked by Kate Millett and Simone de Beauvoir, that feminist politics, or politics in general, could no longer stop at the doorsteps of the family where gendered subordination was, in fact and effect, created and circulated — horizontally in interpersonal relations, and vertically in generational conditioning.

For the Indian feminist movement, Chakravarti explained, this meant an upsurge of movements which explored hitherto unconsidered questions — rape, particularly custodial rape, dowry, dowry deaths, and other such manifestations of gendered violence with roots in the institutions of marriage and the family. Dowry was particularly difficult to speak of, let alone struggle against, for it mattered too resonantly and ruptured the upper-caste sense of complacency on marriage. 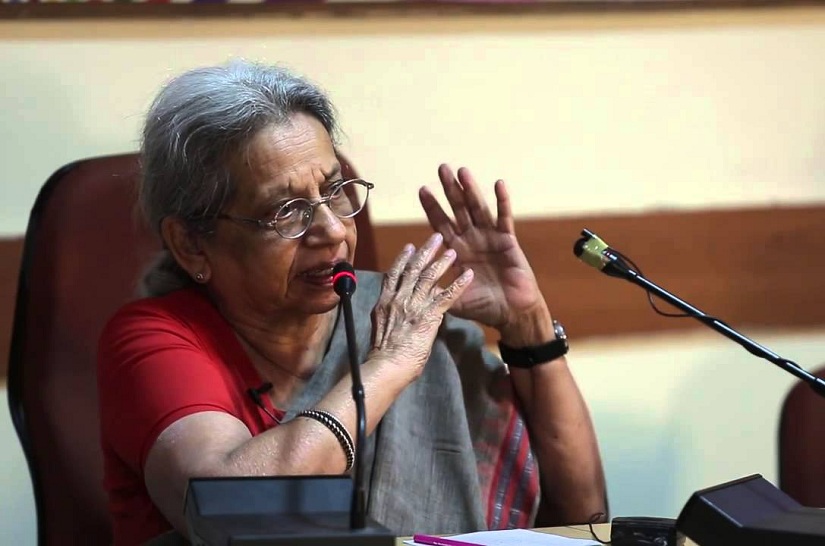 As a historian of early India and a forerunner in feminist struggle of the decade, Chakravarti remembered her resentment of the valourisation of Sita and Shakuntala. This was punctuated when, in a demonstration, a young woman jolted her with “angry demands that I spend some time thinking and writing about why the dominant Hindu culture had created such oppressive conditions for women in their marital homes”. Feminists of this political wellspring tracked the cultural glorification of the two figures and the internalised weight of becoming like them, even in survivors of sexual violence in marriages and families. In the process, they grappled with stifling ideas of appropriate conduct and what they perceived as the cage of motherhood. This inaugurated the struggle to save the Sitas and Shakuntalas of their time, but to save them, they first had to be demystified. Sita and Shakuntala, for Chakravarti and other feminists of her generation, thus came to be the antitheses of everything they aspired to be, and simultaneously, everything that a feminist should be.

This was, however, radically transformed in the discovery of their many avatars, which also involved the exhilarating experience of leaving behind the Brahmanical canon of literary tradition and exploring the faces of Sita and Shakuntala in alternative sources of memory and history, often even folk traditions. Texts and contexts were radically altered, and Chakravarti realised that Sita and Shakuntala need not necessarily be figures to pity and discourage glorifying – they could, in fact, be figures to be reclaimed from appropriation by patriarchal and upper-caste traditions. These two famed protagonists, thus, became texts themselves around whom narratives grew and grew in the manner that the figures themselves were irrevocably transformed, becoming sites of resistance, subversion, and imagining feminist futures.

Sita’s conventional tale asserts a feminine identity of self-sacrifice, but a folk tale from Uttar Pradesh has Sita speaking to her family, declaring that she will never go back to Ayodhya or see Rama’s face again. Here, Sita’s descent into the earth is not a tragedy but an affront voicing her right to live a dignified life. Shakuntala’s tale follows a similar trajectory, instructive in how texts circulate and in what contexts. The hunt which brings Shakuntala into view features opposing tendencies between the king whose attempt to establish political supremacy is masculinist and the world of the forest-dwellers. Dushyanta, the king, ascertains that Shakuntala is a Kshatriya and proposes an appropriate (pratiloma) marriage with her; she demands, in turn, that her son be made emperor when it is time, acting like a responsible mother on earth. Chakravarti argued that when Shakuntala gives a fiery rebuttal in the royal court, she draws upon her egalitarian vanavasi social traditions.

Kalidasa’s retelling of Shakuntala’s tale is located in the political theatre of the Guptas, thus presupposing an urban society and a magnificent courtly audience — here, Shakuntala makes no condition and the forest ashrama is not a forest, but a garden. The variegated contexts of the narrative are dovetailed with issues of caste and marriage – language, for instance, is a social marker of privilege and power as only savarna men speak Sanskrit and all others Prakrit, although they could understand the former.

Renditions in the Urdu and Braj narratives of Shakuntala enrich the tradition; in the Braj version, key departures in refinement and form are made, and Shakuntala is even described as a 'r*ndi'. The colonial reading is the classical representation of the archetypal Indian woman as the era searches for a golden age to further against colonial rule. The film version parallels the folk version where the heroine says that she has had enough and goes back to her world, asking that Dushyanta meet her in better times — Shakuntala, too, like Sita at the very end, reclaims her destiny and initiates a different politics than the one imagined for her.

When we take a particular reading to be central and give it a canonical status to the easy dismissal of alternative readings and re-tellings, we miss a universe of interpretation and narrative — in reading these for Sita and Shakuntala, we make the antagonists of feminist politics its spirited, historical subjects.