Read an excerpt from Debasish Das' book on the Red Fort, a narrative that looks beyond the monument's architecture

In Red Fort: Remembering the Magnificent Mughals writer Debasish Das presents a multi-faceted cultural history of the Mughals. Narrated with anecdotes, the book is divided into four parts. The first part focuses on the court and court etiquette, cultivation of the Persian language, and patronage of scholars. The second part details the symbolism of the Red Fort architecture and divulges in the material culture of costumes, jewellery, food and drink, and perfumes, among others. The third and fourth parts trace the decline and fall of the Mughals.

The following excerpt is taken from the chapter 'The Fort as a Spatial Representation of Mughal Hierarchy' and discusses how different apartments of the Fort were synchronised to suit the Emperor's daily routine.

This excerpt from Red Fort: Remembering the Magnificent Mughals, written by Debasish Das, has been reproduced here with kind permission from the author. 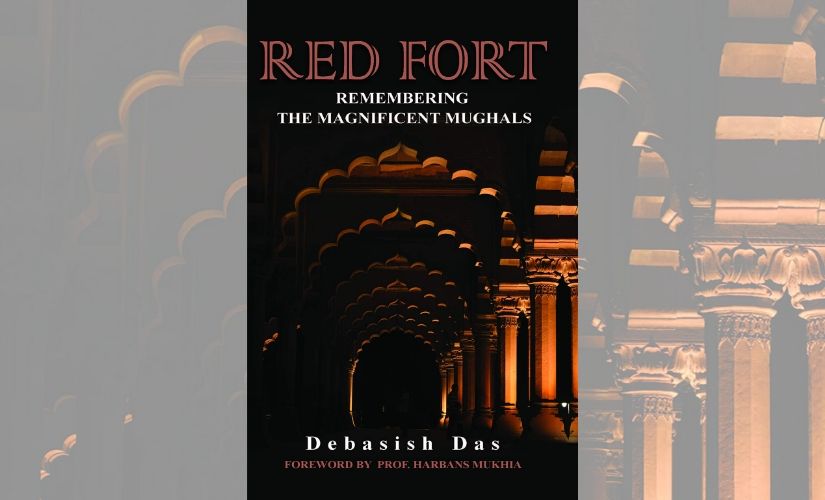 The Emperor’s daily routine was planned meticulously, synchronised with the function of each of the Fort’s different apartments. Just as the sunrise each morning is welcomed after a night of darkness, the Emperor allowed his citizens an ‘auspicious sight’ of himself as the morning rays glittered across the Yamuna. However, as the sun progresses through the day and melts away at the horizon every evening, so the Emperor similarly moved from apartment to apartment in an apparent cycle to address a progressively restricted target audience.

The Fort was designed to highlight the daily cycle of the Emperor in its different apartments. The Emperor appeared every morning at a window in the Mussamman Burj facing the river, illuminated by the rising sun, offering his most public form of audience called the jharokha-i-darshan. He either stood or sat on a high throne, flanked by scribes to note down every word that he uttered. Shah Jahan began his day at 4 am and appeared for the darshan at 6.45 am. Sir Thomas Roe termed the life of the emperor as being ‘as regular as a clock that stricks at sett howers.’ However, both Akbar and Jahangir went back to sleep for a couple of hours after showing themselves at the window. Many Hindu subjects even partook of their first meal of the day or started their duties only after viewing the emperor in this morning ritual. They came to be known as the darshania sect. Prof Harbans Mukhia describes them as, “A sect that grew in Akbar’s reign, engaging in the quasi-religious Hindu practice of breaking fast only after having a glimpse (darshan in Sanskrit and Hindi) of the Emperor in jharokha.” Akbar even promulgated a separate religious law applicable for men and women belonging to the darshaniya sect on how to perform their last rites, which Badauni says he could not explain. Badauni says that they “…stood every morning opposite to the window, near which His Majesty used to pray the Sun, and declared, they had made vows not to rinse their mouths, nor to eat and drink, before they had seen the blessed countenance of the emperor” and they always prostrated themselves as soon as Akbar finished his recital of Surya-sahasra-nama prayer for the Sun.

Sun veneration of Mughal emperors started with Akbar who was taught by the Jain monk Bhanuchandra how to recite the Surya-sahasra-nama (Thousand names of Sun). Badauni, however, blames Birbal whom he accuses of influencing Akbar with sun-worship, saying that all living things depended on the nourishment from the Sun: “The ripening of the grain on the fields, of fruits and vegetables, the illumination of the universe, and the lives of men, depended upon the Sun.” Akbar would thereafter pray to the Sun four times every day, in the morning, evening, at noon and midnight, standing straight with tilak on his forehead and hands pressed against his head. The royal band was required to play at midnight and daybreak for prayers. He made this a public ritual so much so that the European traveller Jerome Xavier considered him a non-Muslim. Badauni says Akbar ordered Abul Fazl to arrange for a sacred fire to be kept burning day and night at court as per the religious custom of Parsis. He also adopted the Hindu ritual of Hom, a kind of fire-worship. Courtiers were required to stand when candles and lamps were lighted in the palace. Akbar abstained from eating meat on specific days, while Jahangir left hunting and eating meat for four years after his ascension.  In 1584, says John F Richards in The Mughal Empire, Akbar ordered a new coinage that bore the single legend: “God is great, splendid is His Glory” (Allahu akbar jalla jalaluhu) with the ambiguous play on the emperor’s name and titles. Audrey Truschke too highlights in the Culture of Encounters that the multivalent wordplay used by an anonymous author who penned a Sanskrit text called the Allopanisad in 1580. Blochmann, who translated the Ain-i-Akbari to English in 1873 comments, “These formulae remind of Akbar’s name, Jalaluddin Muhammad Akbar. The words Allahu Akbar are ambiguous: they may mean, God is great, or Akbar is God. His era was called the Divine era; his faith, the Divine faith; and… Akbar, starting from the idea of the Divine right of kings, gradually came to look upon himself as… the prophet of God and God’s Vice regent on earth…” When a shaykh Haji Ibrahim objected that the phrase is ambiguous and he should replace it, Akbar got displeased and said that it had not even occurred to his mind on such an interpretation. The year 1000 in Hijri era occurred in 1592, and in this approaching end of the first Islamic millennium, he even devised a new solar calendar starting from his date of ascension, calling it the divine era or tarikh-i illahi. Faced with significant outrage to his politico-religious ideas, he rolled back many of such plans. During the same period, he was eulogized by Jain and Brahmin scholars as the reincarnation of Vishnu. His name a-ka-va-ra was poetically interpreted as an amalgamation of ka meaning Brahma, va meaning Vayu, and ra meaning Agni by Gujarati poet Samayasundara in 1592, says Audrey Truschke. Keen on being elevated to a near-divine status in the eyes of his Hindu subjects, he allowed himself to be seen as a second Sun, sitting at the jharokha like a living deity.

After an hour or so, at 7.40 am, the Emperor then moved to the Diwan-e-Aam where he ascended his high-throne and presided over official administration. There he sat in the Jharokha-e-Khas-o-Aam as if he were a reincarnation of King Solomon himself. Standard-bearers stood on his left with their backs to the wall. Eunuchs stood behind his throne with fly-whisks of yak hair and jade handles. Well-built Uzbek bodyguards stood near him, and so did the official executioner.

His throne-platform was almost six feet above the ground, set in a hypostyle porticoed audience hall, supported by 40 baluster columnar structures fashioned like palm or cypress trees and open on three sides. The Emperor sat there as if to evoke the imagery of the flying throne of King Solomon in a forest full of tall trees.

King Solomon, per legend, presided over his animal empire and was even able to speak to birds. The wall behind the throne was decorated with Florentine pietra dura inlay in rectangular frames that were, unusually, outlined in black marble. As if the flora-themed depiction of a hall full of pillars as a dense mass of trees were not enough, these pietra dura panels on the wall were inlaid with hundreds of images of birds sitting amidst entwined flowers and leaves curling and curving in dazzling multi-coloured stones.

At the centre of such a maze of realistic and life-like depictions of the garden of Heaven, was set the unusual scene of the Greek god of music, Orpheus, sitting under a tree while playing his lute and pacifying a lion, a goat, a rabbit and a tiger lying at his feet, unmindful perhaps of the silent cacophony of nature all around him wrought in stone by the Emperor. His lute was said to be a gift from Apollo and his music was so beautiful that not only birds and beasts, but rocks and trees also followed him.