One in nine men are at risk of sudden cardiac death, finds new US study

Washington: About one in every nine men, and one in 30 women in the US may experience sudden cardiac death, most before age 70, scientists including one of Indian origin have found.

Sudden cardiac death claims up to 450,000 American lives  each year, according to a new study and most commonly occurs in people with no prior symptoms of cardiovascular disease. 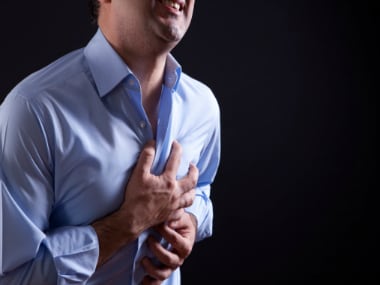 "We often screen for conditions that are less common and much less deadly than sudden cardiac death," said Donald Lloyd-Jones, from the Northwestern University in the US.

"The lifetime risk of sudden cardiac death for men is one in nine, and yet we're not really screening for it," he said.

Researchers, including Sanjay Mehrotra from Northwestern  University, examined long-term data on more than 5,200 men and women aged 28 to 62 who were free of cardiovascular disease at the time of their enrolment in the Framingham Heart Study, a decades-long cardiovascular study.

They also found that men with two or more major risk  factors at all ages had even higher lifetime risks of sudden cardiac death, at least 12 percent (over one in eight men).

Although sudden cardiac death is a leading cause of death in the US, the previous methods for predicting its risk in a person's lifetime have been partly successful, missing many people who ultimately succumb to it, researchers said.

"Sudden cardiac death has been very hard to study because most patients had no history of heart problems and were not being monitored at the time of their death," Lloyd-Jones said.

"The majority of all cases occur before age 70; this is obviously sudden and devastating for families, with a burden that can be quite severe," he said.

"Our paper sets the stage for thinking about how we can screen the population effectively to find out who's at risk," he said.

The Framingham Heart Study provides robust data due to its large number of well-characterised participants and long follow-up time, but because all the participants were  Caucasian, the results cannot necessarily be applied in other races or ethnic groups, researchers said.

The study was published in the Journal of the American Heart Association.