On the trail of the grey ghost: Stalking the elusive snow leopard in the hills of Kyrgyzstan

We gingerly walk along a trail on top of the hill; the trail is just wide enough for one person to pass, and the hill is many hundred metres high. The view from the top is spectacular: we are surrounded by a long chain of mountains, only separated by grassy valleys with beautiful clear streams rippling through them.

Some of these mountaintops still have snow on them, in late August. But the once blinding white snow has turned muddy. The other hilltops are grey, rocky in patches with steep gravelly slopes covered with scruffy yellow grass.

On one such hill, we notice a puff of dust clouding the air. We train our binoculars to see what is causing this smoke. We spot a herd of Siberian ibex kicking up gravel to expose some fresh shoots to feed on. Their moulted summer coat of slaty grey hair perfectly camouflages them against the pebbly slope. The rams in the group have impressive ridgy bow-shaped horns and long dark beards. The females stick close to the kids that seem to be a few months old. Every now and then, the females look around to see if there is any danger to the kids. 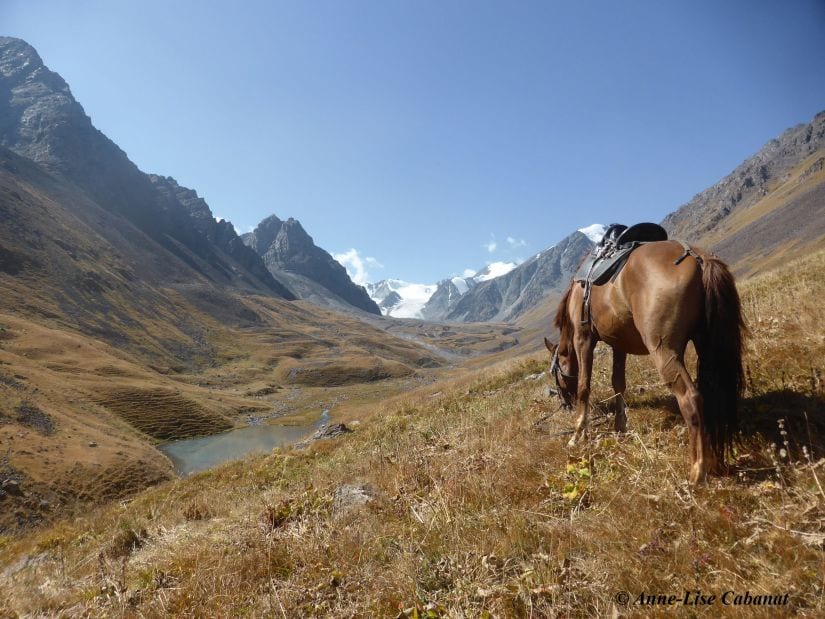 It is a peaceful scene, with a clear blue sky on top of rugged, high mountains that have sweet crisp air swirling around. The ibex herd grazes along the mountain slope for the rest of the day.

This peace could be easily shattered if the top predator that roams these hills makes an appearance. The snow leopard, after all, is adept at stealthily sneaking up on a herd of ibex and dashing down the slope to throttle one. Its rosetted grey coat blends perfectly with the surroundings — it is this inconspicuous quality of the snow leopard that makes it hard to detect and even harder to track in the rugged mountains it occupies, from Russia to Kyrgyzstan to the Himalayan countries.

For this reason, researchers studying snow leopards install cameras on trails that the cats are most likely to frequent. Any animal walking past a pair of these cameras triggers a photo. Comparing these images, it is then possible for researchers to identify individual snow leopards as each one has unique patterns on their skin (just as humans have unique fingerprints). All the individual snow leopards taken together are an estimate of the population in the region.

“Camera traps are really easy to set up and work for more than a year,” says Anne-Lise Cabanat, an expedition manager with OSI Panthera. Cabanat adds, “You get lots of pictures of wildlife that you wouldn’t normally get to see.”

One such region where researchers are on a quest to unravel the secretive ways of the snow leopard is the Shamshy wildlife sanctuary which is a three hours' drive south-east from the capital Bishkek. Until recently Shamshy was a trophy hunting reserve where hunters would pay large sums of money to track and shoot wild animals like the Siberian ibex or argali. But in March 2016, the previous president, Almazbek Atambayev, declared 200 square kilometers of the reserve as a protected sanctuary where hunting is now banned.

This has had a positive impact on the animals in the reserve and their numbers seem to be on the rise. “I am really surprised we have seen many ibexes in Shamshy,” says Bastien Chaix of the animals we saw over the two days we were there. Chaix, along with Cabanat, co-manages the OSI expeditions in Kyrgyzstan. “It is good.”

Chaix adds, “People won’t hunt snow leopards but will go after ibexes.” But such hunting can hurt snow leopards as fewer ibexes mean less prey for the predators to feed on. This eventually has a ripple effect on the number of snow leopards that can survive in a region.

From his several expeditions through many protected areas in Kyrgyzstan, Chaix has had mixed luck with sighting ibex and other prey animals of the snow leopard. In some, like Shamshy, his groups spot several herds. “But in some protected areas you can look for 10 days but won’t see any ibexes, nor anything else.”

Cabanat and Chaix are former biologists who run expeditions for groups of 10-12 people in the summer months in Kyrgyzstan. A group travels on horseback, spending up to three weeks in a reserve. The participants help set up camera traps, count herd of ibexes, survey potential areas that can be set aside for protection and undertake other projects that contribute to the science of the animals.

When the two of them are not leading expeditions for OSI Panthera, they volunteer with organisations that are learning more about the snow leopards, to protect them in Kyrgyzstan. In March 2016, a 200 sq km of the Shamshy reserve was declared a protected sanctuary where hunting is now banned. Photo credit: Anne-Lise Cabanat

One such international non-profit is the Snow Leopard Trust. The organisation is not only engaged in carrying out ecological research on snow leopards, but is also involved in managing newly declared reserves such as Shamshy. They have built guard-posts for rangers to stay warm during the harsh winter months, provided them with equipment to collect data on animals and also boot their remuneration.

Earlier in the day after a hearty breakfast of sausages, local bread and endless cups of tea, we had set out to install camera-traps on the hills of Shamshy. Riding on horses, we crossed rolling meadows and flowing streams to get to the base of the hills. Crossing one of the steams we gawked at a white-throated dipper dipping in the river’s rapids to catch insects. It would hold its breath for a few seconds as it hunted for prey underwater. A little further ahead we came across a Eurasian hobby doing the same by hawking from a perch. Much later, after we had laboriously made our way halfway up the hill, we noticed a pair of golden eagles effortless soaring in a spotless sky, having caught warm thermals as the sun had risen over our heads.

Eventually, we caught a trail on the shoulder of the hill that we would gingerly tread. These are the walkways that snow leopards stroll on when patrolling their territories. Our breathless gasps were partly due to the altitude and partly due to the anticipation of coming face to face with “the grey ghost”. Capturing the tension in the air, Chaix quipped, “People have discovered snow leopard in places they didn’t expect to find any, but you go on mountain ridges and see scrape marks or scat.”

No later then he had said that we came across a small ditch on the side of the trail that had been pawed out. By the end of the trail, we saw several such clearings.

We never got a glimpse of the mysterious cat of the high mountains. But we saw plenty of evidence of its existence. We also spotted animals that would enable the snow leopards to survive and experienced a reserve that has all the trappings for it to thrive.