Nariyal Paani 2017: An untrammeled way of experiencing music and the gentler tide of life

The perils of a high-stress job are that weekends usually begin to feature just a bed, a snug blanket, food delivery, Netflix and a spine that's always resting. Aware of this increasing apathy I was developing towards socialising, I jumped at the opportunity to cover Nariyal Paani — a music festival by the sea.

A high-strung, overworked, neurotic individual assigned to cover a music festival, the stress topped the charts. On a particularly hot sunny Saturday in January — that's Mumbai for you — I made my way to The Gateway of India, piling on mental stress about missing the Nariyal Paani boat to Alibag. What would happen if I miss it? How would I cover the event? I huffed, puffed and made my way to Jetty no 20 (I had noted it down quite diligently on a sheet of paper the night before, a habit my colleague finds peculiar, another side-effect of a high-stress job is neuroticism). In front of me, lined along the parapet near the filthy city-part of the Arabian Sea, was what seemed like an endless line of people braving the Sun, waiting for their turn to get on to a rickety boat that would take them to Alibag, Mandwa or wherever it is that they wanted to go. A little clueless, before I could ask anyone about the ferry, I spotted the bright blue flag — it was swaying with the unmistakable three-triangle logo. I rushed towards it and in my usual shifty, nervous and awkward fashion, I introduced myself to Ayudh from the festival crew, and lingered around, hoping that my colleagues will soon rescue me from the pitfalls of small talk. People trickled in — ones became twos and after a few hours of making new acquaintances, talking about the sweltering heat, hunger pangs and thirst, we were ushered into a wobbly ferry — rather a double-decker boat.

The excitement was palpable, everyone on the boat just wanted to be in Alibag already — sipping on Gin and Tonics or Kokum coolers, but to be travelling with Neel Adhikari and Zico as they regaled us with an eclectic electronic-acoustic set on a boat in the middle of the Arabian Sea had a thrill of its own. The present was light — Adhikari's magical voice filled the air, the noodlings on the guitar curled toes, and the mind was beginning to set free, with seagulls for company, hair blowing wild and free, at times a splash of the salty water eased out residual dullness. Music festivals are usually not backslid, though they all claim to be — it's usually an unmanageable crowd thronging the stage area, long wait-times for artistes and bands. And, Nariyal Paani is unlike any music festival you have ever seen. When they promise a laid-back vibe, they deliver. Tucked away in the fairly uncharted portion of Alibag, the event venue was a sprawling beach side. We made our way through an thick foliage, passed by large and old banyan trees —  the festival was nestled in an ecosystem of its own — and the sound of music drew us in. Our dusty feet sunk into the folds of the soft sand. A few perched on the green sandbags, a few stood along the trees near the stage area as we walked in to witness Arko Mukherjee, of Fiddler's Green, dressed in a teal and blue tie-and-dye kaftan who was more than just comfortable belting out songs in multiple languages. Someone from the audience whispered, "Can you believe this guy? He can sing in almost 15 languages."

No sooner than I entered the festival, I belonged to it, never mind that nature of tranquility and peace is ephemeral. Mukherjee's high tenor and the husk in his voice helped me develop a fresh appreciation for folk, rumba and manuche melodies.

Nariyal Paani was an experience of the alternative — music, art, food, culture and social work included. Kulture Shop took it upon itself to create art out of boulders, rocks and tree trunks. The Maachis Project put up their festival-themed matchboxes and Small Change, an NGO helped stir up a spirit of charity and urged people to consciously work towards change. 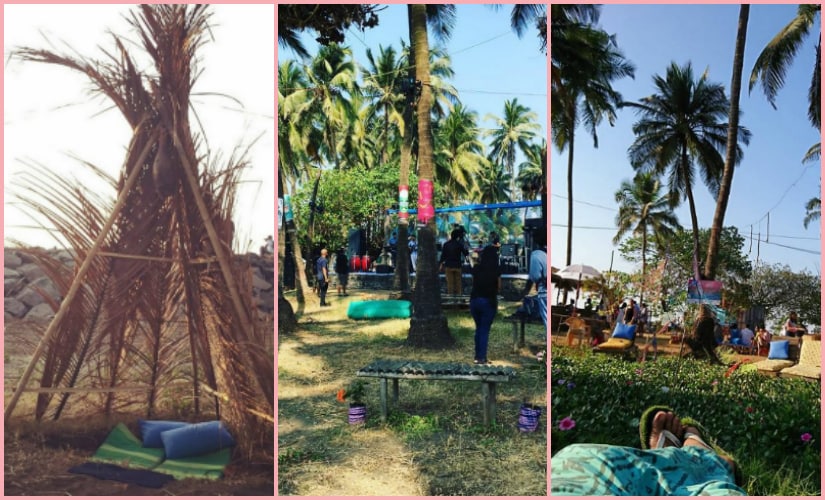 The vibe at Nariyal Paani was unlike any other. Images Courtesy: Instagram @magicalsalad, @nariyalpaani

With tastefully done decor and an attention to detail, the festival didn't just look beautiful, it also felt beautiful. Near the stage area, there were four small make-shift tepees with cushions in a shallow-pit, a little ahead was the bar with chilled beer and cocktails. Behind the stage area was an inviting carpet of green — pool chairs waiting to be occupied. Stalls promoting organic goods, clothing and food were lined up on one side. LataSita — Meghna Nayakan's ethical fashion brand which upcycles old sarees stood out as various artistes wore the 'community coat' — made with old sarees, with the words 'old is the new new' sown in — and walked around the festival grounds spreading the good word. It was impossible to be at Nariyal Paani festival and not get caught up in the festivities of it — copious amounts of beer complemented by juicy burgers from Woodside Inn. Suddenly, I wasn't neurotic, I didn't feel the need to jot down every thing I saw or heard, instead I gave in to the spirit of the festival, unquestioningly, unflinchingly.

Parekh and Singh brought whimsy to the scene, a pop-electric duo from Kolkata, they made music that was honest, simple and unassuming. What's not to love about songs about love, being in love and hurting in love, with melodies that lingered long after the last beat of the drum and snare.

Jordan Johnson, the 21-year-old, at first glance looked like he would make music that includes a healthy amount of growling, but with a sublime repertoire of original songs, Johnson's music was the sort that would touch one's very core. Johnson's music had influences of Damien Rice, Bon Iver and it showed in the way his voice painted a complex landscape of emotion.

In many ways, Nariyal Paani festival became an exercise in discovering art, music — experiencing the hair-raising beat boxing performance from Bellatrix or swaying hips, Don Bhat and Passenger Revelator's grunge-infused sounds to the seductive yet casual music from Mabassa. The festival put forth musicians and artistes, just 'regular people' like you and I, not as demigods they are often projected to be. By blurring the divide between the listener/connoisseur vs artist/musician, Nariyal Paani festival achieved what most festivals are unable to — an untrammeled way of experiencing music and the gentler tide of life, one that disregards quantity for quality.

As the Sun went down, and the mood turned toward's reggae's favour, around me were men and women — their bodies swaying to the beats and there was mirth and laughter.

Wow! I thought, not feeling sorry about the Monday that was to come, instead drawing up plans to come back next year.

Here's a look at the Nariyal Paani festival: