There are many who think that the 'whole' tandoori chicken is the king of all edible birds but there are many old-timers who disagree violently. For them (and for me for that matter) the undisputed sovereign is the now all but extinct species of murgh musallam.

The word derives from salim, literally translating as intact. Wrinkled bawarchis never tired of regaling diners with apocryphal stories of an unt musallam in Arabia that contained a musallam bakra which in turn provided shelter to the chicken. Closer to home, the humongous raan alishaan-akbari, sikandari , patialashahi or bokhara is essentially a raan musallam! Sure beats the pot roast or leg of lamb. 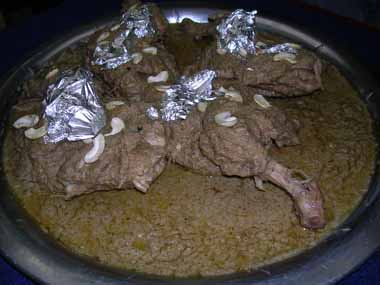 The vegetarian gourmet not to be left behind in Awadh of yore encouraged their maharaj to create similar-looking musallam delicacies from vegetables. The lauki musallam and karamkalla are two such gems that can outshine much on the carnivore’s platter. The gourd is hollowed — carefully so as to not pierce or puncture it — then stuffed with mouth-watering morsels of cottage cheese, hung yogurt, mélange of seasonal vegetables, saffron tinged milk fudge and minced morel mushrooms.

The Western chefs who take extraordinary pride in their suckling pig can still learn a thing of two from their peers in Awadh in the centuries past. But we digress from the delicious subject at hand.

The murgh musallam doesn't only have more stunning eye appeal it also tastes delicious. The chicken marinated for hours and then slow cooked on dum came in two different avatars: either dry or with a thick sauce-like gravy. In both cases the flesh was succulent and aromatised sublimely. As you ate your way in you encountered a seductive bed of biryani or pulav on which sat a whole hard-boiled egg. Surprise of surprises: when you bit into the egg, a flavourful mince of pistachios and pine nuts raisins and almond sliver exploded in ecstasy, showering bliss on the jaded palate.

The last time I had murgh musallam, mother was still alive – and, bless her soul, though a vegetarian herself, she loved to cook endangered recipes of all kinds. The only other time I have come across the dish was about half-a-century back when Salim Miyan, the Dak Bungalow Chowkidar at Mukteshwar, a small colonial outpost in the Himalayan wilderness, cooked it to show off his prowess on a dare!

The murgh musallam takes a long time to prepare and serve and provided master chefs with a legitimately inflated bill for exotic ingredients. Restaurants who are still brave enough to put it on their menu require many hours of notice to serve, We have, however, never known anyone to order it under such discouraging conditions. I think that it was greed that killed the musallam with the goose that laid the proverbial golden egg. The recipe, though simple enough in its original incarnation, was deliberately obfuscated and rendered expensive beyond reach.

It may not be long if this bird joins the list of extinct members of the flock comprising Dodo, the Great Indian Bustard or Himalayan Quail. How can we let it RIP?

Recipe on the next page

Clean, wash and pat dry the chicken ensuring to cleanse the inside thoroughly.

Prick the bird all over deeply with a fork or sharp needle. Apply the papaya paste all over. Keep aside for three to four hours.

Grind half the onions to a paste and keep aside. Grind ginger and garlic to obtain a fine paste. Dry roast the whole spices and grind to a paste adding a little water.

Heat ghee in a thick-bottomed pan and fry the onions till rich brown. Drain and remove. Reserve the oil for later use.

Wipe the papaya paste off the chicken and brush inside and out with saffron liquid.

Mix the freshly ground spice paste with powdered spices, blend with yogurt and apply this to the chicken rubbing firmly inside and out. Keep the chicken in this marinade for about an hour.

Stuff the chicken with half of fried onions and chopped eggs. Secure the filling by trussing the chicken and tying with a piece of thread.

Place the chicken along with the marinade and remaining onions in the same pan with ghee in which onions were fried. Cook covered in low heat for about 30 minutes.

Remove when done to taste, untie the string and discard it before serving. Place on a platter draping with sauce-like gravy and garnish with almond slivers and drape in chandi ka varq.