Mrs and Marx: A new play delves into the domestic life of the ‘The Father of Communism’ and his relationship with his wife

The people we meet in the pages of history, more often than not, are characters carefully built with words, barely ever made of flesh and blood. Take for instance the legendary German philosopher Karl Marx, largely referred to as ‘The Father of Communism’, who presents himself in his bushy haired and gruff bearded glory in our collective imagination on being mentioned. Author of the iconic Communist Manifesto and Das Capital, Marx could rarely be mistaken for an ordinary man doing regular things, like writing letters to his wife and worrying about his next meal, until artistes Satchit Puranik and Michaela Talwar decided to demystify and humanise him for the world through their documentary theatre piece, Mrs and Marx. The production premiered at the National Centre for Performing Arts (NCPA) in Mumbai on 5 May, marking the communist icon’s 201st birth anniversary.

Karl Marx and the doppelganger

Puranik, an alumnus of the Film and Television Institute of India (FTII), is no stranger to Marx. To begin with, the man is a spitting image of Karl Marx. Add to that, he’s lived in the philosopher’s skin for a while, having played the eponymous protagonist in the Gujarati play, Karl Marx in Kalbadevi for over five years. For a strictly commercial space like Gujarati theatre, the experimental idea seemed “suicidal” at first. Six years and over 100 shows later, the play continues to be a crowd-puller, now staged in ‘Hinglish’ as well.

“Gujarati theatre essentially is a commercial space where plays make a lot of money. It is a thriving industry. Any kind of experimentation and minimalism is not encouraged at all. And a thinker like Marx finding a footing among an audience like that (is not easy),” Puranik says. On being commissioned by the NCPA’s Vasant Gujarati Natya Utsav, the play’s director Manoj Shah held no hopes for an audience beyond a handful of people, perhaps a dozen if they got lucky.

All Shah wanted was to show his Gujarati audience the different ways in which money travelled in an economy, and he felt that Marx was the perfect vehicle to do so. The noted director says he was influenced by Marx’s philosophy and wanted to convey, through his play, how the world’s wealth is concentrated only in the hands of eight to ten percent of the population. “Our Gujarati ancestors came to Bombay with the intention of earning money. (With Kalbadevi) I wanted to talk to my people about money because Gujaratis traditionally believe that they control the economy. But the truth is the complete opposite,” he says, adding that even if Gujaratis don’t know who Karl Marx is, they certainly understand money.

For 27-year-old Yash Varan, Marx was just another name found in history books and internet memes, until he caught a show in Ahmedabad about a year ago. “Before watching the play, I just knew Marx’s name and knew that he was well known. Such plays are usually not performed in Gujarati theatre. From that perspective, the play was different and unlike comedic performances that I had normally seen,” he says.

It was while watching one such performance at Mumbai’s Prithvi Theatre around a year-and-a-half ago that the contemporary Indian premise of a play on Marx intrigued Michaela Talwar. Talwar is the co-founder of Harkat Studios, an alternative ‘boutique’ performance space in Mumbai. Following this creative encounter, Talwar and Puranik discussed the possibilities of diving deeper into Marx’s life and exploring his relationship with his wife Jenny von Westphalen, who is portrayed by Talwar in Mrs and Marx. Harkat Studios handles the production of the play as well.

Puranik’s uncanny physical resemblance to Marx encouraged his director, Shah, to play the gamble of introducing the German thinker to Mumbai’s Gujarati theatre. Now, after his second venture as Marx, the actor intends to produce another play, which will either deal with the philosopher’s relation with his daughter Eleanor, or zoom into the time he had pawned his coat to buy paper and ink for writing, but wasn’t allowed to enter a library without a coat.

American playwright Howard Zinn’s one-man play, Marx in Soho, inspired Uttam Gada to pen Kalbadevi. According to Puranik, playing Marx helped him find his own politics, making him view the world through a Marxist lens. A lack of references while imagining Marx in Kalbadevi, and not knowing German could’ve left the actor in the lurch; instead, it fuelled his creativity like never before. “Because the stage is the only place Marx can land up in Kalbadevi, their spirits can be invoked and you can see Marx and Jenny’s love story (as with Mrs and Marx). This is how one is pushed into journeys like this,” he says.

The play goes behind the scenes to unravel the Karl in the Marx, retelling the stories of a father, a husband, and a companion, all of whom came together to create the formidable man. In Karl and Jenny’s world, love happened at the price of life and livelihood. “It is the love story of the most hated man in the world, and the only way to counter the hatred is to go into what kind of an impossible love story could happen between people who lived in such poverty and lost four of their children to malnutrition, and took 15 years to write a book,” Puranik says, adding that historians have largely invisibilised his wife and her contributions to his journey.

Mrs and Marx begins with Puranik and Talwar playing themselves, and later invoking the spirits of Marx and Jenny, who then possess them and communicate through their bodies. The performance shows snippets from the couple’s lives, juxtaposing some events of the present with those in the past. “We are going into the world of ghosts and spectres. Our research showed that Marx had a huge lisp and he was very conscious about it. A lot of his anger management issues had to do with the fact that he had excess heat in his system with the kind of lifestyle he led. He also had a host of health issues,” Puranik says.

Jenny, a sounding board for Karl Marx

The 2011 book, Love and Capital: Karl and Jenny Marx and the Birth of a Revolution, by Mary Gabriel, triggered the idea for the play. The novel chronicles the couple’s life and examines Jenny’s relationship with her husband. The book also explores Marx’s relation with his close associates, including dear friend and colleague, Friedrich Engels.

In order to get under Jenny’s skin, the German-born Michaela Talwar (née Strobe) pored through biographies and letters written by her. “That was very tough — researching, finding these books. Luckily, I’m German, so I could read them in the original language, which is of great help because the English translations, I realised later, are quite bad to the point where it becomes misleading,” she says. 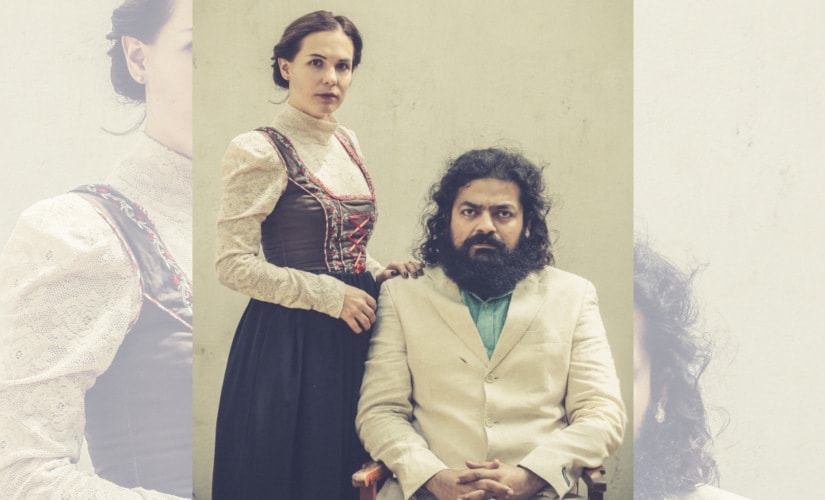 The personal, anecdotal letters that Jenny wrote to her husband opened a window into the life of the couple. From professing their deep love for each other to deliberating on ways to make ends meet, the letters helped Talwar befriend the persons underneath the characters.

In one of his letters to Jenny, Marx reportedly wrote, “When I get up in the morning, the first thing I think about is how my Jenny is doing." “It is really cute,” says Talwar with a laugh.

Jenny hailed from an aristocratic family and had received an excellent formal education. “She learnt how to think for herself and read and understand philosophy and Shakespeare. She could speak in three languages as well,” the actor says.

Jenny was significantly enamoured by the Romantics, whose philosophy formed the bedrock of her idealistic approach to love and life. Her faith in the power of love motivated her to battle through bitter hardships, like losing four of her seven children to malnutrition, and being unable to afford food to eat. “What kept her going was that she really believed that the love they have for each other could conquer anything and that they had an idealistic dream, which is worth fighting for,” Talwar says.

Jenny’s comfortable childhood was at odds with Marx’s wayward life. Her sensibility acted like a “sounding board for him”. “He would go on his long tirades about someone, become emotional and get carried away with solving the problems of the world, and she would pull him and be like ‘Okay, I know what you are saying but put it in simpler words, what do you actually want to say?’ I think that is why their relationship worked so beautifully, because she was the person he could fall back on,” the actor observes.

Condensing this vast amount of research into a 100-minute play was no mean feat. In almost a metanarrative scène opening the play, Talwar is seen punching away the story they are about to enact on a typewriter, as dictated by Puranik. The play is divided into seven acts, and uses video projection in different parts to enhance the storytelling.
While reconciling with the outlandish idea of Marx doing regular things may take some time, the play eases its audience into the life of one of the most influential historical figures in the world. The play shows the ‘Father of Communism’ holding a baby, scrambling for money, writing a book and ensuring his children are well turned out and educated in music, while not having the means to afford theatre tickets.

“The play is not about whether you believe in communism, it is about a man who was thinking about the injustices in his time and looking for solutions. Now, 200 years later, the same injustices still exist,” Talwar says, drawing one’s attention to Marx’s relevance even today. “Labour problems and discrimination against women still exist. The life the labour class leads in Mumbai today is very similar to how labourers lived 200 years ago. And that is what shocked us. How is that even possible? Have we not evolved yet?” the actor implores, perhaps in search of an answer that demands rewinding time.