'It is privileged Hindus who suffer from the sickness of caste'

Some may say S Anand, who worked with Outlook as a journalist before founding Navayana in 2003, has a chip on his shoulder about caste. His supporters would argue he's telling it like it is. In this second and final part of the interview, the publisher of Navayana talks about how caste persists because the privileged in Indian society subscribe to "typical brahminical" thinking, and Indra Nooyi.

You chose to christen April, "Dalit history month". Why?

Well, in 2002 I was involved as an editorial consultant with a short-lived bimonthly magazine called The Dalit founded by Dalit Media Network, which also runs Dalit Murasu, a monthly in Tamil. (Meena Kandasamy went on to edit The Dalit for a few issues. The venture eventually folded up.)

This was pre-Navayana days. Ravikumar, with whom I was to soon co-found Navayana, suggested to me at The Dalit that we announce that April be observed as Dalit History Month, on the lines of February which has been observed for decades as Black History Month in USA. February is Black History Month for African Americans since a lot of key events related to blacks happened in that month. In 1926, it was conceived of as Negro History Week by former slave Carter Goodwin Woodson, and in 1976 it became Black History Month. 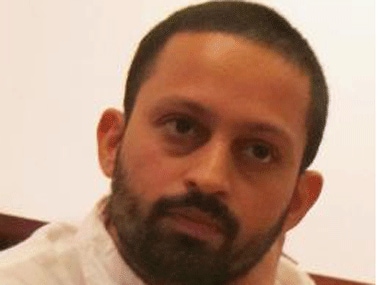 Now, April is the month when the birth anniversaries of Jotiba Phule (11 April), Dr Ambedkar (14 April) and even the less regarded Jagjivan Ram (5 April) fall. Hence, the call for April as Dalit History Month. This is just an occasion to recall, remember and commemorate the thousand of Ambedkars, the scores of subaltern resistance figures each place in India has thrown up but whom mainstream histories do not even mention in a footnote.

Has running Navayana been educational?

It is an enormous privilege to be able to do Navayana, even if I take just a subsistence wage. Much of this privilege and the social-cultural capital that accrues from it is, I think, largely unearned. In India, birth into the right caste and class imbues you with a host of unearned privileges. For someone like me who was born a frog-in-the-brahmin well, the opportunity to read and engage with Ambedkar, Periyar and Phule was like a rope; it equipped me to climb out of the well. The pity is while dalits and other oppressed castes can immediately see the horrors of caste – they have not one good reason to cling to it – for the believing brahmin, caste defines his existence; it is his summum bonum.

While such a conservative brahmin can even be grudgingly pitied, it is the liberal-secular brahmin who is the real snake in the grass, as Kanshi Ram perhaps saw Sitaram Yehcury. I must quote Yechury’s memorable lines which he, in typical brahmanical manner, retracted from Outlook where the interview was first given: “Unfortunately, instead of raising the country’s level to mine, where I, a Brahmin, did not even know I am in the same carriage as a Dalit, we had to stoop down to the Kanshi Ram level.”

Such a brahmin finds it convenient to act caste-blind. For the seemingly radical or liberal-secular brahmin, caste is at best seen as an issue that is vested in others – the non-brahmins and other lowly creatures. About caste that resides and originates within himself, this liberal brahmin has to be in denial.

In your opinion, why has caste-based inequality persisted in India?

This is too vast a question for this interview, I think. But I will give it a shot.

In short, the problem is that brahmanism has been in India’s DNA. The caste system, which cannot stand the test of either morality or rationality, has morphed and survived over millennia in various forms. Like Ambedkar said in his Annihilation of Caste address in 1936, you need to dynamite the vedas and shastras that justify this system. You need to blow the caste system to smithereens by jettisoning the brahmanic texts from which they still draw sustenance. Genial reforms like inter-caste marriages and inter-dining will hardly help.

In India, the privileged castes have not even begun to look at caste as an immoral site of privilege. Especially post-Mandal, caste has been relegated by the mainstream media and by the classes that claim to be the intelligentsia to issues of reservation and electoral politics. The new term used to denigrate dalit assertion is to call it identity politics. For the privileged, talking about caste means spouting venom against the policy of reservation, against Ambedkar, against Mayawati.

Look at how caste operates in such a taken-for-granted manner in this unabashed conversation between two notorious brahmins of our times:

NANDAN NILEKANI: Your mother seems to be have been a huge influence on you, right from the days she prompted you to get 100% marks in Maths and all that...

INDRA NOOYI: That is typical southern Brahmin stuff. So there is nothing unique about that. I think that she was genetically programmed for that. The entire family focused on grades. When parents got together they only compared the report cards of their kids. Anybody who got together would say, 'so how is your child doing', 'what rank'. That was growing up in 50s and 60s. The real issue is, my father travelled a lot and my mother was back at home.

Genetically programmed? There’s nothing unique about scoring 100 percent in math, you see, if you are a brahmin. Imagine two WASPs in the US having this brazenly cheery conversation about the perks of racial privilege and stereotypes. Not a personal conversation over drinks – oh, but Nooyi gratuitously keeps telling us she does not drink, and that she is vegetarian – where they may say such things, but a public conversation for a newspaper the equivalent of Economic Times.

And this was no one-off instance. In several features that got written about Nooyi after she became PepsiCo chief – and this happened, she says in the same interview mentioned above, because her mother prayed for her 4-5 hours a day – her brahmin-ness was cheered and celebrated. In interviews, she flaunted it, repeatedly saying stuff like, “I scored a hundred in math because I am from a South India brahmin family”. This implies that if you are the daughter of a weaver, a potter or a rickshaw-puller, you will be a dud in math? Is this not about caste? I would say someone like Nooyi needs counseling. She needs help – as do many brahmins.

The point is, as long as the privileged castes flaunt their privilege, do not learn to introspect on it, but on the contrary feel proud of it, caste-based inequality will persist. The so-called economic boom in India has in fact reinforced brahminism. With absolutely no compunctions about the exercise of monopolies, the brahmins, baniyas and other elite communities continue to stifle any genuine thrust towards equality.

A study in EPW in 2012 pointed to how corporate boardrooms in India are run like Old Boys’ Clubs and how there’s no diversity whatsoever there. The study found that 90% of the boards are made of two castes: 46.6% vaishya and 44% brahmin. Corporate India is the den of casteism. At least state-run sectors had to implement reservation, even if reluctantly. Today, the only place where some ground has shifted is in the realm of electoral politics where you have to perforce respect the law of the land and have nominal, representation equality. How this space has been hollowed out is another story for another day.

What makes you hopeful that the books you publish will change/unsettle the status quo?

Navayana’s target audience, frankly, is non-dalits. I see no need to talk about Ambedkar and such stuff to dalits. They already know. Though, as our author Anand Teltumbde once told me, ‘you may say that, but a lot of dalits would be buying Navayana books.’ But it is the non-dalits who feel the need to cling to caste; it is privileged Hindus who suffer from the sickness of caste. Our most successful book, Bhimayana, the graphic biography of Ambedkar translated into ten languages, has reached a wide cross-section of non-dalits. They write letters and mails about how the book touched them.

You know, at several events around this book, especially when I see what I suspect is a largely non-dalit audience, I pose one question: Where was Ambedkar born? For the correct answer, I offer them a free copy of Bhimayana. Sadly, I rarely have had to part with a free copy.

Yes, books surely have a way of unsettling the status quo, if not in changing it. When Ambedkar printed Annihilation of Caste in 1936, it sold like hot cakes. And yes, I have to tell you this: Gandhi the baniya began his response to Ambedkar with a typical complaint that the price of the booklet was too much at 8 annas and that it should have been 2 or at least 4 annas. Perhaps he had been angling for a free review copy for his journal Harijan like book editors of today do! But Ambedkar in 1937 wrote in a new preface, “The English edition of one thousand five hundred copies was exhausted within two months of its publication.”