Irrfan Khan: The Man, The Dreamer, The Actor celebrates the artiste, but reveals little about 'the man' himself

The Homi Adajania directorial may be the most significant milestone in his illustrious career, as it is not only the sequel to his biggest global hit yet, — Saket Chaudhary's 2017 film Hindi Medium — but also the first film he shot after his treatment for neuroendocrine tumour. Ahead of the trailer release of the film that's slated to hit screens on 13 March, 2020, Khan had announced in an audio message that he would not be able to promote the film because of his ailment, or the "bin bulaya mehman" (uninvited guest). 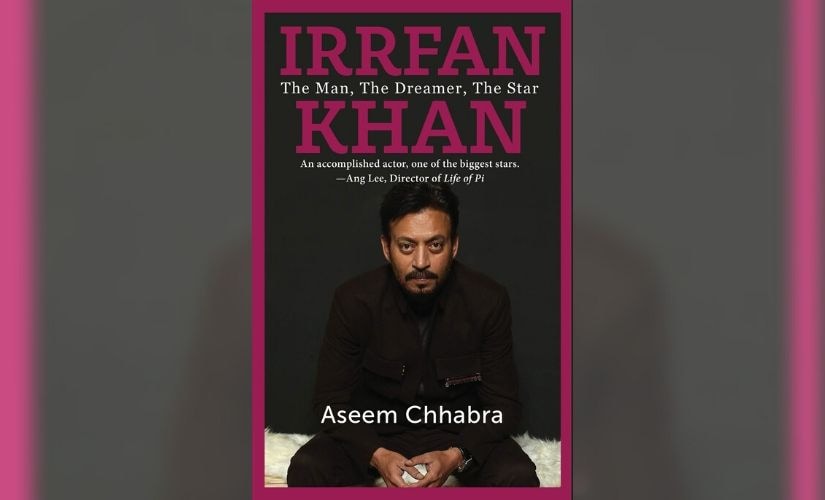 Irrfan Khan: The Man, The Dreamer, The Star, by Aseem Chhabra

Right at the start of his biography, Chhabra clarifies in the prologue that though he has obtained Khan's approval to write a book on him, the actor was unavailable for an interview, as he was recuperating from the disease when the idea was conceived. So while there is relatively less of Irrfan in first person (barring excerpts of some key interviews in his career), there is a lot of him as seen through the lens of his cinema, and through the eyes of those who have known him up-close and personal.

It is a commendable move on Chhabra's part to refrain from too many accounts of his personal life, which may have amounted to the breach of Khan's privacy, particularly at such a sensitive juncture in his life. As an aberration, this call deprives the readers of insights into the enigma that is Irrfan Khan, as most of the text is limited to Chhabra's analysis of his diverse roles and career graph.

In an interview with Filmfare, actress Konkona Sen Sharma had said these famous words, "My personal life is not for scrutiny, observation, and comment. But my work definitely is." Chhabra swears by this dictum in the biography, though he makes a great attempt at incorporating the inputs about Khan from his wife, writer Sutapa Sikdar, his friends from his hometown Jaipur, batchmates from National School of Drama (NSD), and colleagues from the Hindi film industry and Hollywood. While some of these inputs have been gathered first-hand, a lot of them have been quoted from publications, televised chat shows, and interviews.

However, where Chhabra does excel — probably owing to his experience of having written similar biographies on Bollywood celebrities (like Shahid Kapoor and Priyanka Chopra) in the past — is in compiling these countless inputs into a comprehensible account. The book mostly follows the chronology of Khan's life and career, and divides the chapters into various phases of his life, where inputs from his close ones and colleagues are peppered all over, though in no random fashion. Considerable weightage has been given to his childhood in Jaipur, his time at NSD, his subsequent struggle in Bollywood, breakthroughs, and later, his stint in Hollywood.

The initial chapters on childhood and college would suggest his is not exactly a rags-to-riches tale like fellow NSD graduates Nawazuddin Siddiqui and Pankaj Tripathi. However, it is definitely the story of an underdog, because of the conscious decision Khan made of not playing by Hindi cinema's rulebook. He did not train himself on the lines of a conventional 'star', — whether holistically or in terms of his physicality. He consistently focused on honing his acting skills, and that combined with his natural charisma, made all the difference.

Despite being from a small town, Irrfan Khan did not face the wrath of conventional, authoritarian parents, according to the book. He was given the freedom to pursue his choice of subject at NSD, but only because his potential as a leading man in Bollywood was not considered promising at all. However, once Khan joined NSD in Delhi, there was no looking back. After graduating from the institute in 1984, he managed to get his first role in a Hindi film only in 1988 — Mira Nair's Oscar-nominated Salaam Bombay.

An interesting trivia by Chhabra reveals that Khan was offered a longer role — that of Salim — in the film, but Nair could not visualise his physically-fit avatar as the grown-up version of an emaciated slum kid. Accounts of his close ones reveal how Irrfan did not stomach the news well and cried his eyes out, while accepting a cameo instead. Nair kept her promise of casting Khan in a bigger role in the future.

Though it took her almost two decades, she ultimately did give Irrfan Khan his international breakthrough in the 2006 romantic drama The Namesake, opposite Tabu, followed by a short film opposite Natalie Portman in the 2008 American anthology New York, I Love You.

Trivia like this (or the bit about Sen Shama being offered Tabu's role in The Namesake) makes Chhabra's book an encyclopaedic documentation of everything that is forgotten once the final result eclipses the initial developments, or the immensely fascinating world of what-could-have-beens. There are other endlessly interesting details, like how Khan had to let go an offer to do Ridley Scott's 2015 science fiction film The Martian, due to his commitment to Shoojit Sircar's Piku, or how he had to reshoot all his portions in Ang Lee's 2012 adventure film Life of Pi, after the filmmaker decided to not have Tobey McGuire share screen-space with Irrfan in the final cut. There is also an anecdote that has broken the internet already — of how Avengers star Mark Ruffalo complimented Khan for his work at a Los Angeles restaurant. Closer home, there's an anecdote in the book that recounts how Irrfan directed Nawazuddin Siddiqui in an episode of the 1990s' TV show Banegi Apni Baat.

All these instances not only indicate the actor's impressive achievements, but also shed a light on his parallel career in Hollywood. Since Aseem Chhabra was a US-based journalist for the longest time, with his career abroad coinciding with Khan's rise overseas, he enjoys enough access and perspective to comment on the actor's Hollywood career in depth. In the book, Chhabra also points out how, while Danny Boyle's 2008 Academy Award-winning film Slumdog Millionaire put many Indian film talents on the global map, Khan was already a well-known household name in the US. But what the film helped with was casting him in roles beyond stereotypical representations of Indians in Hollywood.

Irrfan Khan's Hollywood filmography, usually perceived as being limited to Slumdog Millionaire and Life of Pi, also includes Michael Winterbottom's 2007 film A Mighty Heart, co-starring Angelina Jolie, besides The Namesake, Wes Anderson's 2007 dramedy The Darjeeling Express (though only in a cameo), New York, I Love You, Sony's 2012 superhero film The Amazing Spider-Man, Ritesh Batra's 2013 international co-production The Lunchbox, the 2015 sci-fi adventure film Jurassic World, Ron Howard's 2016 mystery action thriller Inferno co-starring Tom Hanks, and the 2018 indie film, Puzzle. While some of these were criticised for not giving Irrfan a part meaty enough for his potential, the fact is he managed to update his impressive resume every time he even appeared in a Hollywood blockbuster. Chhabra takes a deep dive into each film mentioned above by tracing the origin and impact, accompanied by a subjective analysis of Khan's performance. The same goes for the biographer's detailing of the actor's Bollywood films. While he minutely deconstructs Irrfan's breakthrough in a negative role in longtime-friend Tigmanshu Dhulia's 2003 film Haasil, not much attention is devoted to his extremely layered and intriguingly titular role in and as Maqbool (2003), directed by Vishal Bhardwaj, which was a Hindi adaptation of William Shakespare's play Macbeth. In fact, a disproportionate account is dedicated to Khan's extended cameo as Roohdar (The Conjurer) in Bhardwaj's 2014 film Haider, an adaptation of the bard's Hamlet.

Chhabra also discusses in brief the artiste's image makeover with Anurag Basu's 2007 romantic drama Life... In A Metro. The role was an early sign of his versatility as an actor, since he could flex his comedic muscles while exploiting his dramatic faculties.

The year 2007 saw him playing two roles that were poles apart in terms of their nature and origins: that of a socially inept Mumbai man looking to get married in Life... In A Metro, and a Bengali immigrant in the US in The Namesake.

Thankfully, a lot of due has been given to the year 2012, when Khan was seen as the grown-up version of the protagonist in Life of Pi. However, besides that, he probably delivered his most noteworthy performance in Bollywood yet, with Dhulia's sports drama Paan Singh Tomar, for which he went on to bag a National Award as well. This was followed by yet another breakthrough in 2013 with The Lunchbox, in which his portrayal of a middle-aged man, Saajan Fernandes, was steeped in the pathos of the solitude and loneliness one experiences in a metropolis like Mumbai.

The actor's heartfelt performances in Life of Pi, Paan Singh Tomar, The Lunchbox, and later, Qissa, displayed his mettle as a performer with unparalleled heft. However, the streak of emotionally charged roles could not keep him from embracing his signature wry sense of humour, as seen in Piku. Khan held his own in the presence of bigger 'stars' like Amitabh Bachchan (whom he idolised while growing up) and Deepika Padukone. It only set the tone for his impending blockbuster in Hindi Medium a couple of years later.

This illustration of his career graph would have come across as mundane in the book had it not been for Aseem Chhabra's constant endeavour to bridge the gap between the outcome (analysed through his observations) and Irrfan Khan's creative process (analysed through his collaborators' insights). From painting him as a method actor who creates fresh magic with every take, to the perennial potency of his baggy eyes, all the traits of the actor we know today have been explained by a host of his associates multiple times through the course of the book.

But in times when an actor is no longer an object of mystery, thanks to the ubiquitous influence of social media and the paparazzi, the book still fails to delve much into Khan's personal life. It would have been fascinating to know what makes Irrfan Khan the man he is from the horse's mouth itself.

As mentioned in the opening of this essay, the exploration of the actor's mind through his words is not as feasible now as it may have been five years ago, given his health crisis. In that case, the subtitle of the book needs to go through a reassessment. Irrfan Khan: The Man, The Dreamer, The Star could perhaps have been phrased as 'Irrfan Khan: The Actor, The Dreamer, The Star', because clearly, the book focuses on his capacity as an actor.

Chhabra emphatically argues that Khan is the best actor in the world, and backs his claim with substantial evidence. But what maketh a man is only fathomable through the man's confessions. And unfortunately, in this case, those are few and far between.