In the Sundarbans, Hindu devotees offer 'bhog' to Muslim goddess for protection from tigers

Fifty-five year old Bhabotaron Paik is a forest guard at the Neitidopani forest reserve in the faraway western edge of Sundarbans jungles. But before he dons his khaki uniform every day, he bathes, wears his dhoti and puts on an orange gamchha (stole) on his bare shoulders, a red tilak (mark) on his brow and heads out, barefoot, to the “Bon Bibi temple" to present her bhog (the offering of food that is made to Hindu deities).

First, he cleans her temple, washes the goddess' utensils before performing an aarti and reciting some mantras. A fellow priest bangs the gong and Paik blows the conch. Then he offers sandesh as bhog for the deity. A portion of it is distributed as prasad to all those participating in the puja. Nothing's unusual for the volunteering priest — except that the goddess, Bon Bibi (Lady of the Forests), is a Muslim deity, worshiped mostly by Hindu devotees. 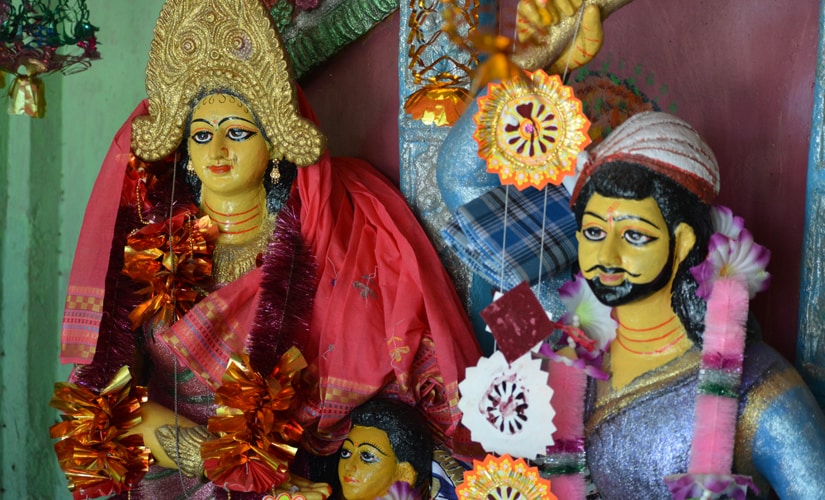 Bon Bibi’s shrine is located at the entrance within the doubly wired fenced office of the reserve forest under the Sundarbans Biosphere Reserved area. Paik has served as the official priest in the isolated office in one of the densest forest area.

He is regular in his puja for the last 30 years. “Ma doesn’t discriminate amongst her devotees. So why should we? Everyone prays to her here," says the priest.

In times of religious segregation and faith based identity, Bon Bibi perfectly symbolises the intricacies of Indian religious confluence. In the finery of a Hindu goddess, she sports a mark of red vermilion in the parting of her hair, hands full of gold bangles epitomising the perfect Hindu bride. A golden crown on her head, she stands in the midst of her brother Shujaan Ali and Dukhi (a young boy she had saved in the jungle) along with a tamed “Gazi and Narayani — the villains — and Dakhin Rai the evil tiger” all by her side. 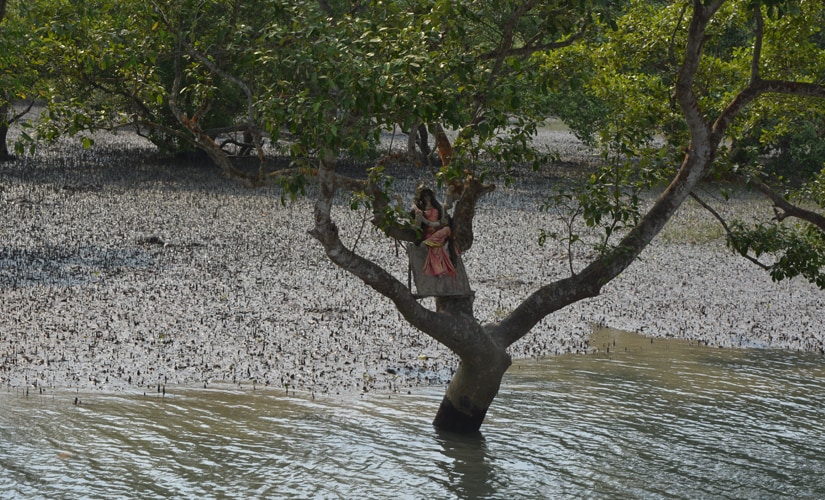 Deep in the jungle, a statue of Bon Bibi

“It is due to Bon Bibi’s mercy that we are alive and earning a decent livelihood”, says Paik after reciting the Sanskrit mantras that names all the Hindu gods in addition to Bon Bibi. As the mythology goes, a young Bon Bibi was brought here from her home in Saudi Arabia and deserted by her father (a trader) at the behest of her step mother. Later she became the goddess of the jungles and safeguarded her devotees from the dark and the wild. It is said none of the villagers ever dare enter the jungle without offering prayers to Bob Bibi — be it a Muslim, Hindu or Christian. Paik explains, “Each time we go to the jungles we make a promise to Ma Bon Bibi: that we will not take more than we require from the forest, or else we antagonise her”.

In the nearby small fresh water pond constructed by the forest department, the royal Bengal tigers, icons of the delta forests, come every day to drink fresh water from across the heavily fenced office. A notice board marks the daily timing of the visits. The pug marks and the cameras at the watch towers maintain track of their movement. However, a few years ago, Debnath Mondal — a tiger rescuer — was attacked by a tiger very close to Bon Bibi’s temple.

“It was prayers that brought me back," says Mondal. "I was lying in the hospital for three months. I still cannot hear or see properly from my left ear and eye," he says, pointing towards his injured face. Another Bon Bibi devotee and a tiger rescuer from the nearby Bali islands Mritunjay Mondal says philosophically, "We have to cohabit. The world is not just for humans. These jungles are also for the wild. And this is where our Goddess keeps us safe. She does not discriminate amongst her devotees, the tiger does not either, only we humans do."

The evenings are pitch dark and amid the silence, Jatra (folk theatre) artistes enact the story of Bon Bibi. Artists dress up to perform as Bon Bibi, her accomplice/brother Shujan Ali and the outlaw Gazi, who sold off Dukhi, 10, to traders from Saudia Arabia in exchange for honey from the jungles. A deity of Bon Bibi

Men and women sit together in low light near the numerous shrines to hear the religious saga and show their devotion and solidarity towards each other, living in these high-risk jungles. Men, women, honey collectors, mangrove growers, crab seed collectors, fishermen, boatmen all carry a Bon Bibi statue in their bags, wear amulets blessed by the goddess or tie a small idol of the deity to a mangrove tree branch to keep away the wild and the evil when they are at work. “The goddess enlightens people to go back as soon as their requirement is fulfilled, that is keeping the order of the jungles," explains Nityanand Roy Karmakar, a forest ranger who has been in the reserve area for the last two years.

The Sundarbans are a medley of several islands large and small, where land meets water and tides smudge the boundaries, eating away portions of earth every day. Inhabitants in the far-flung villages completely depend on water and jungles for livelihood. Every large wave brings in a splash of salt water, mixing it with the fresh water of the three major rivers — Ganga, Brahmaputra and Meghna — that flow out to the sea. About 40 lakh people live in an area of 4,000 square kilometers on the Indian side of the delta region, that extends a further 10,000 square kilometers in Bangladesh. More than 70 percent of the area is free of human habitation but the rest is very densely populated. It is hard to fence the jungles and divide the fresh from the salt water even as humans and wildlife coexist side by side. But the blessings of Bon Bibi, as popular belief holds, makes life just a little bit easier, in this difficult terrain.