In Istanbul, Aslı Cavusoglu navigates the story of geography, conflict through her art

The fluttering red flag featuring a white star gravitating towards a crescent moon is one of the most pervasive objects both inland and along the horizon of the waters leading from the Bosphorus towards both the Marmara and the Black Sea. “In case we forget for a moment where we are,” my Berlin-based Greek friend, Byron said sardonically as we were sailing upon the turquoise strait separating the continents of Asia and Europe. Byron’s insightful grasp of history is beyond impressive. It was he who alerted me to the origins of the word, turquoise, which dates back to the 17th century, deriving from the French adjective for Turkish, turquois, “because the mineral was first brought to Europe from Turkey, from mines in the historical Khorasan Province in Persia,” corroborates Wikipedia, the crowd-sourced web encyclopaedia that’s incidentally banned across the country. Byron is a friend of Bilgen who is a friend of Aslı Çavuşoğlu, who is a friend of mine. She and I had met on an island in Goa in January this year, during the 14th Khoj International Artists’ Residency for which I was invited as the resident critic. I had the great privilege of inhabiting the same house as her and five other artists. We called it the Pinto House, even though Gagan Singh, who has a penchant for misconstruing names, would often call Pinto, the caretaker, Ponty. It was within the span of those three weeks that Asli sent not so subtle hints about us visiting her in Istanbul. She told us she lived on the fourth island off the mainland, Buyukada, the one I headed to soon after landing in her country after my travels through Germany, France, and Greece. In fact, my entire Europe trip was the unintended consequence of her invitation. After three weeks of intense traveling through Berlin, Kassel, Aix en Provence, Bergundy, Paris, and Athens, I was finally on my way to what was supposed to have been my only destination.

I took the metro from the airport to Yenikapa, then changed lines so I could exit at Sirkeci. “Walk out of the station and you’ll see the sea in front of you,” Asli said over the phone. I followed her instructions and found the ferry point. It was the second day of Bayram. The city was overcrowded by local tourists, preventing her from picking me up. I hoisted my luggage onto the ferry and sat still for an hour and a half, overwhelmed by the water, and by the fact that I was actually here, finally, after wanting to for years. It was past 6 pm when I neared the erstwhile predominantly Greek-inhabited Buyukada. After our reunion, we took a horse carriage to her house. I entered and was awed by its size and its aesthetics. The original owner, a Greek woman, had intriguingly had her face painted on the ceiling, in close proximity to the portraits of her maids. As I settled in, Asli laid the table in the garden after a quick dash to the local store to buy some Raki. We feasted on Turkish tapas and conversation and slept only around 2 am. I woke up the next morning to the horns of ferries announcing their arrivals and departures and to the over-enthusiastic murmurs of passers by who insisted on pausing by her front porch to take selfies. Her house was where a famous tele-novella was once filmed, Asli explained, offering a reason for its prominence in the touristic Turkish imagination. 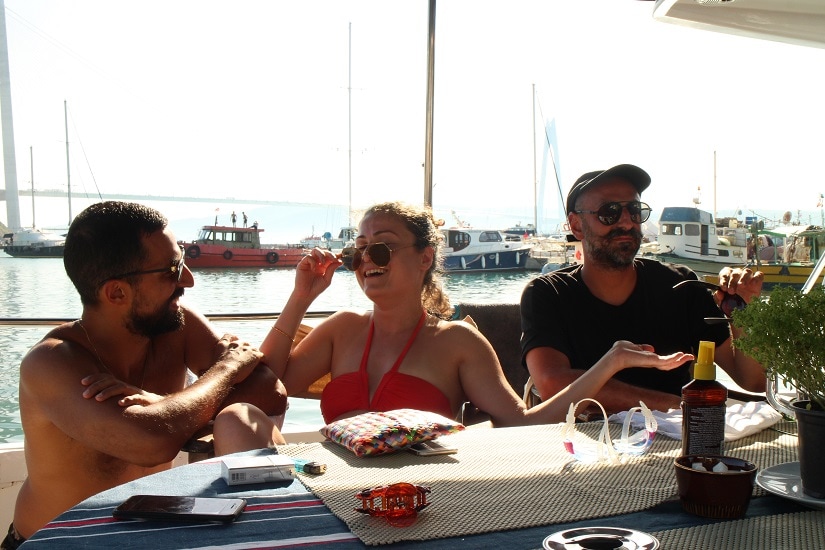 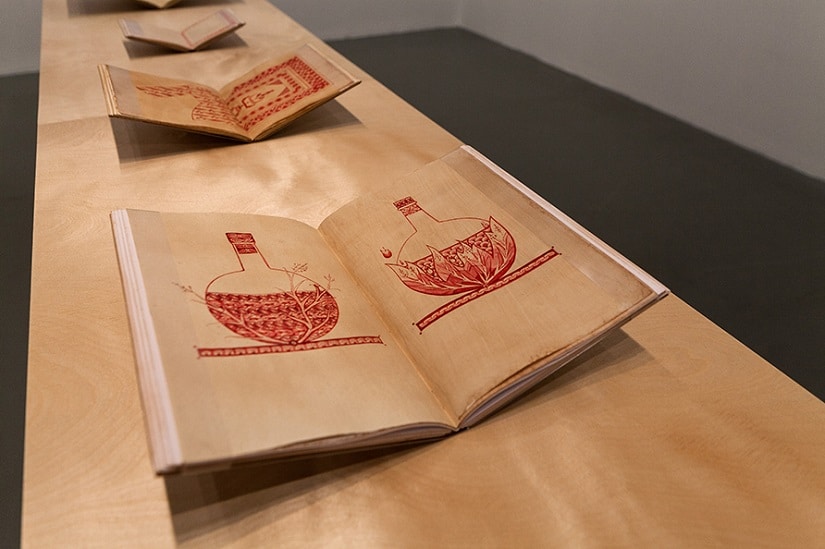 It was after breakfast that I discovered a remnant of Asli’s 2015 series, Red/Red loitering on the mantle above the fireplace in the dining room. Produced for the 14th Istanbul Biennial, Red/Red was a series of drawings that tell a story of geography and conflict through the colour red. Asli used a specific pigment, traditionally made from an insect called “Ararat” or “Armenian Cochineal”, living in the roots of the Aeluropus littoralis plant and indigenous to the Ararat Plain, which marks the natural border between Turkey and Armenia. The carminic acid contained within this insect was used to produce a characteristic red since the 7th century BC, which was used in textiles, frescoes and manuscripts produced by the Armenians. Now categorised as an indigenous species in Armenia, post industrialisation since the 70s, the plant and insect is in abundance on the Turkish side. However, the knowledge of how to produce the red has been lacking since 1915. Asli tracked down an Armenian phytotherapist and senior researcher at the Mesrop Mashtots Institute of Ancient Manuscripts in Yerevan named Armen Sahakyan who, using recipes found in 14th century Armenian manuscripts was able to produce for her 12 grams of the Armenian cochineal ink. “In Red/Red the story of the evolution that the colour went through on both sides unfold: Armenian cochineal red is being replaced by the red of the Turkish ‘flag’ on the side of Turkey and on the Armenian side rapidly diminishing,” Asli notes on her website.

Over the next 10 days I would come to discover how intuitively and subversively artists living in Istanbul were wrestling with issues of identity and authoritarianism under the vertiginous shadow of Erdogan’s regime, and how visual art could be a poignant medium for registering dissent and fostering revolution against the bludgeoning reality of fascism.

Part II of this Istanbul diary follows on Sunday, 22 July.