If Jared Leto's remarks made you wig out, here's all you need to know about the merkin

Let’s cut right to the chase.

Merkin — you either know what it is or you don’t. It’s just one of those things like why does the Earth stay in its orbit and not move to Mars’ or Venus’ for a little while, or why do some people wear their watches on their left wrist while others opt for the right, or where does the poop go after you pull the flush.

On Sunday night at the Oscar Awards, while presenting the nominees for the gong for Best Makeup and Hairstyling, actor Jared Leto alluded to a merkin. He was kind enough to direct those who didn’t understand the word — or thought it was a type of gherkin — to Google, where they would find their answer.

Ever-helpful, the actor, who memorably got seven shades of the proverbial beaten out of his face in Fight Club, realised some people would probably be too lazy to even Google and tweeted this:

But that’s just what it is. How about the ‘why it is’?

The first historically-documented use of the pubic wig was in 1450 according to The Oxford Companion to the Body — which appears to be a popular source of information on the topic. Back in those days marked by the far-from-stellar quality of hygiene and cleanliness, pubic lice and crabs were fairly common. And so, some women — weary of all that dreadful itching and scratching — opted to shave off their pubic hair and use a merkin, which back then was called a 'malkin'. Prostitutes would apparently don a malkin to cover signs of sexually-transmitted genital diseases.

The etymology of 'malkin' is long and meandering (but should you choose to explore it, look no further than here), so we'll just sidestep it. Suffice to say that by 1617, the first use of the word 'merkin' had been noted. 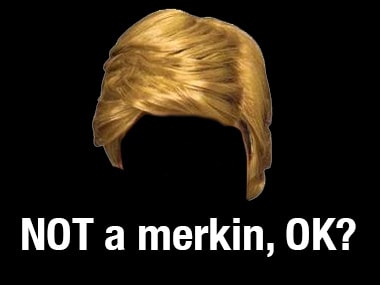 It's not! How dare you suggest it is?

There's a strange story from sometime around when the malkin became a merkin — also from the fabled Oxford Companion and one that has been told far and wide across the internet — about a prankster who sourced a merkin from a disease-infested prostitute. He proceeded to give the little wig a quick wash, a dry and a combing. After gift-wrapping it (we assume), he went on to present it to a cardinal, telling him it was a 'St Peter's beard'. Whether or not the cardinal wore it, is not known, but it's the thought that counts.

Oh, then there's also the theory that back when women were banned from stepping onto stage, men portrayed women in plays. For nude scenes, the story goes, they would deploy a merkin in order to cover up their naughty bits and keep alive the illusion that they were actually women.

One, who would wear merkins as an aspirational prostheses of sorts, to display their affluence — the ability to stay groomed and clean being something only the wealthy could afford at the time.

The second type wore it to cover STDs, sores, fissures, warts, the works.

And soon, they entered the world of cinema. As Thought Catalog explains, there was very little nudity in Hollywood until 1966 — the year the Motion Picture Association of America came into being. Considering the fact that censors would clamp down on films that showed female genitalia, a merkin was the way to go in order to avoid an NC-17 certificate (which would greatly hamper your film's chances of getting a theatrical release).

And the rest is history: From Heidi Klum and Kate Winslet to Rooney Mara, Jake Gyllenhaal and several others, numerous actors and actresses have donned a merkin in films.

Over time, it also acquired a sexual value with the now defunct website merkinworld.com describing the wearing of a merkin as a 'sensory experience' — one that allows the wearer 'a certain jouissance' since it rests on an erogenous zone. Is there anything that can't be fetishised in today's world?

So now you know. And knowing is half the battle.

And for those of you left mildly/majorly (delete as you deem appropriate) traumatised, it's a good time to thank Jared Leto: