London: British writer Hilary Mantel won the prestigious Man Booker literary prize for a second time Tuesday with her blood-soaked Tudor saga Bring Up the Bodies, which the head of the judging panel said had "rewritten the book" on historical fiction.

"You wait 20 years for a Booker Prize, and two come along at once," Mantel said as she accepted the award at London's medieval Guildhall. "I regard this as an act of faith and a vote of confidence."

Mantel, who quipped in 2009 that she planned to spend her prize money on sex and drugs and rock 'n' roll, said "I'm afraid the answer will be much duller this year."

"Rehab," she joked, before adding: "My pension, probably." 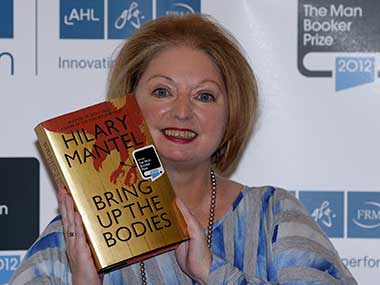 Hilary Mantel, winner of the Man Booker Prize for Fiction, poses for the photographers with a copy of her book 'Bring up the Bodies', shortly after the award ceremony in central London. AP

Bring Up the Bodies" is the first sequel to win the prize. It and Wolf Hall are parts of a planned trilogy about Thomas Cromwell, the powerful and ambiguous chief minister to King Henry VIII.

Alternately thoughtful and thuggish, trying to keep his head in a treacherous world, Mantel's Cromwell has drawn comparisons to the Mafia don at the center of the Godfather saga, and Mantel's novel combines finely wrought prose with thriller touches.

"You can see as much Don Corleone in this book as DH Lawrence," said Times Literary Supplement editor Peter Stothard, who chaired the Booker judging panel.

"This is a bloody story," he said. "But Hilary Mantel is a writer who thinks through the blood. She uses her art, her power of prose, to create moral ambiguity."

Bring Up the Bodies traces the intertwined fates of Cromwell and the monarch's second wife, Anne Boleyn, who fell from favour when she failed to produce a male heir.

Stothard said the new book "utterly surpassed" the earlier novel, breathing new life into a well-known story. Henry VIII's reign has inspired many fictional treatments, from the acclaimed play and film "A Man for All Seasons" to the soapy TV series "The Tudors."

Stothard said Bring Up the Bodies showed "the greatest modern English prose writer reviving possibly one of the best-known pieces of English history."

"This is all well-trodden territory with an inevitable outcome, and yet she is able to bring it to life as though for the first time," he said.

"She has rewritten the book on writing historical fiction."

The Booker, established in 1969, usually brings a huge sales and publicity boost for the winner.

Before she won three years ago, Mantel was a critically praised but commercially lukewarm author of novels about everything from the French Revolution (A Place of Greater Safety) to the life of a psychic medium (Beyond Black). Now, the 60-year-old author is a best-selling literary sensation.

"My publishers were always announcing my breakthrough book and it never really happened," she said of her early career. "My fortunes began to turn when I met Thomas Cromwell."

Mantel joins Peter Carey of Australia and JM Coetzee of South Africa as a two-time winner of the prize, which is open to writers from Britain, Ireland and the Commonwealth of former British colonies.

Mantel beat five other shortlisted books to take the prize. She had been the bookies' favourite, although Britain's Will Self was also considered a strong contender for the century-spanning stream of consciousness Umbrella.

Indian poet Jeet Thayil was nominated for his first novel, "Narcopolis," set among heroin addicts in 1970s and 80s Mumbai, and Britain's Alison Moore for "The Lighthouse," about a middle-aged man's life-changing ferry trip to Germany.

The other finalists were Malaysia's Tan Twan Eng for The Garden of Evening Mists, which centres on a survivor of a World War II Japanese prison camp; and South Africa-born Briton Deborah Levy for Swimming Home, a portrait of the devastation wreaked by depression.

The prize - officially known as the Man Booker Prize after its sponsor, financial services firm Man Group PLC - always sparks a flurry of betting, and a blaze of literary debate.

Last year's jury, which gave the prize to Julian Barnes for The Sense of an Ending, was accused of dumbing down after the chair of the panel said finalists had been chosen for "readability."

This year's list was more adventurous. Only Mantel had been a finalist before, and Self is a relentlessly modernist experimenter, while Tan, Levy and Moore are all published by small independent publishers.

Mantel's book was the best-seller on the shortlist, and will now sell in even bigger numbers.

Wolf Hall and Bring Up the Bodies also are being adapted for television by the BBC, and a stage version is in the works. But Mantel said she was trying not to feel the pressure as she works on the final book in the trilogy, provisionally titled The Mirror and the Light.

"It is not the Olympics," she said. "It is not a competition. You are only as good as your last paragraph - and I haven't even written one of those today.

"When I start writing again, I'll forget all this, because every day has got its new problems and every day you feel like a beginner. ... It's just you struggling with your subject matter and a blank screen."