You can telecast a speech to a child, but you can't force him to listen. Or can you? Some schools in Delhi are certainly doing their best by making Narendra Modi's Teachers' Day speech part of their standard class exams.

Bal Bharati Public School, Noida, has issued a circular -- shared extensively and with great amusement on Twitter -- which read, “The school will remain closed (preparatory off) on September 5 for all classes. However, for classes III to XII, the key points of the Prime Minister’s address are to be noted and learnt for the school to evaluate the same (during the upcoming examination from Monday).” One question of two marks each will be included in each of the five main papers, it added.

Principal Asha Prabhakar explained this bold decision to Indian Express: “These days, students understand the language of examinations and marks only, so I decided to test them on the PM’s speech. I think this will help them assess their listening abilities also and force them to think on the PM’s stand on various issues of national importance.” 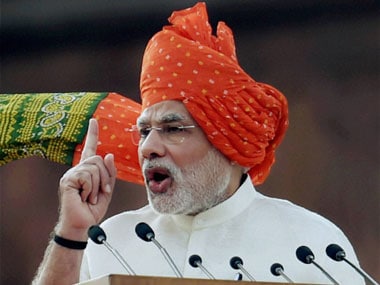 Cue the #ModiExams hashtag as the Twitterati scrambled to come up with their own version of test questions.

“Explain why they fondly refer to Sardar Patel as the 'Narendra Modi of the freedom struggle?'” (8 Marks) #ModiExams

“List all of Jawaharlal Nehru’s girlfriends and explain why he was against Indian culture.” (20 Marks) #ModiExams

If Smriti gets a degree from Yale in 6 days how many minutes will it take Modi to get a Ph.D.? #ModiExams

Just in case there are un-Bharatiya slackers out there who don't mind losing a couple of marks in a test, Delhi Public School, Mathura Road, is resorting to outright threats: “Attendance is compulsory for all the students and strict action will be taken against the absentees.” This is to be expected since the schools themselves have been warned of dire consequences if attendance levels fail to match bureaucratic expectations.

But the Modi sarkar apparently forgot -- or failed -- to bully the DTC which has raised the flag of rebellion. According to the Hindustan Times , "Delhi Transport Corporation (DTC) — which provides close to 1,000 buses to 95 schools — has refused to change its schedule to pick up students in the evening."

A DTC spokesman told HT, “We will provide buses in the morning but 5 pm is peak office hour. The general public will be inconvenienced if we divert buses to schools.” Of course, the DTC's brave stance has been staked out at the expense of other, leaving the schools to arrange for private buses or force the parents to pick up their children.

As a nation, we excel at passing the misery.

While Twitter continues to make lemonade out of Modi-served lemons, AAP leader Yogendra Yadav was moved to write an open letter in the Indian Express to his Pradhan Mantriji, which charmingly admits what would be obvious to any child: that a 12 pm start to a school day is not exactly unwelcome. Yadav's daughter, however, has other problems with the Teachers' Day bandobast:

"But what bothers her is that all this is done to ensure that the entire school can listen to you on a big screen. She does not know what you are going to speak about. Now, she has no objection to listening to the prime minister. What she doesn’t understand is why she could not do so on TV at home. It’s a free country, she says, why can’t I have a choice? If it had to be done at school, why couldn’t you adjust your schedule to suit school timings?"

Yadav's critique of the upcoming PM speech is that it offers his daughter and other children "a lesson in the rituals of power that go with the infamous VVIP culture: everything can be changed to suit saheb’s convenience." But the sight of children, herded and lined up neatly to listen to their great leader, smacks more of good old socialist-era subservience to Big Brother -- which explains its disdain for free market silliness like individual choice. That it is being mandated by a man heralded as the saviour of the nation from UPA-era populism makes for delicious irony.

Now Prime Minister Modi knows well the dangers of old school self-aggrandisement. It is the reason why he specifically knocked down the proposal to make his biography part of the school curriculum in Gujarat. But he seems to have ignored his better instincts when it comes to Teachers' Day.

Sure, much of this petty tyranny may be due to over-eager babus who scrambled into action the moment the plan for the speech was announced, but a canny politician like Modi ought to have foreseen the same.

Whatever he may say today, however inspirational his rhetoric, the PR dividends will remain slim and for two reasons. One, he has bullied children into obedience much as a whimsical family patriarch; and two, he has stolen from the nation's teachers the one day that rightfully belongs to them. No good news can come of that.