Facebook's new Ask button: It's all about sex and money

Facebook is going to get much more annoying. If you thought 'pokes' from random strangers were bad enough, now Facebook friends can 'Ask' you about your relationship status or when you went to college, or which city you currently live in.

Facebook, it seems, is not happy that you want to keep some profile information invisible or even missing . The new “ask” button will now pop up on the pages of friends and if you feel they haven't bared every inch of their personal life on Facebook, you can ask them about it.

The button is being seen as unnecessarily inquisitive and the general opinion is that it will be mostly used to ask if someone is still single. The creepy boy from your college or high-school who you never spoke to or a girl who was just another number on your Facebook list might soon be asking you for you relationship status now.

So if you are asking about someone's relationships status, you have the option of adding a little explainer with it as well. One that can potentially carry with it a date request. And Facebook will notify you, as soon as your friend chooses to share that information with you. 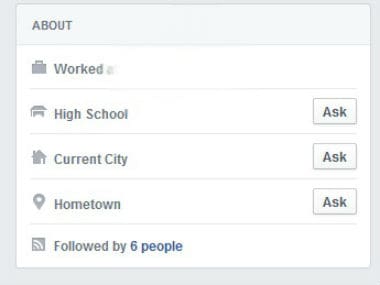 As this report on The Guardian points out, the 'Ask' button isn't about openness, it's about Facebook wanted a slice of that online dating pie.

"Openly encouraging users to pester other people, however, is a new development. It's clear that Facebook is looking to cash in on the success of Tinder and Down (formerly known as Bang With Friends), the Facebook add-on which encouraged casual campus hook-ups. Online dating is big business. Sex sells."

Both Tinder and Down rely heavily on Facebook data. Tinder is based on select photos from Facebook, common interests that you have liked on Facebook and of course, location. And more importantly you need a Facebook profile to login.

While FB flirting seems to be one obvious use, the button isn't just about that. It is a serious push on Facebook's part to get users to engage more and give up more information on the site. But it's being clever about it. Facebook won't ask you for your private information, it will get your friends to do it for them.

And in some cases, this kind of engagement will be creepy. Not everyone in that list of 575 friends is close to you, which is why you might have put them on limited profile in the first place. But thanks to Ask, you maybe in that unenviable position of either refusing to answer the question -- awkward! -- or doling out information just to be polite.

Some hope that 'Ask' will die a natural death due to basic good manners. This piece in Slate argues, "Asking someone about their relationship status with no context or warning is incredibly creepy and embarrassing for both parties! Nice try, though."

Embarrassing or not, users are likely going to try out the 'Ask' button, especially teens who might be spying on a crush via Facebook. Or even an older user who wants to know if their ex is still single and/or living in the same town as them. The list of potentially curiousity cats who will use the button is endless.

For Facebook, that curiousity represents major moolah.  In the US, the online dating industry is booming. According to The Fiscal Times "the industry has expanded to become a $2.1 billion powerhouse. Analysts expect the acceleration to continue over the next five years. Target marketing, changing demographics, and decreasing stigma about online dating are continually bringing new users to fore."

Facebook can't have a share of this pie, without pushing users to make their profiles fully visible to more and more of their network. For creators of dating sites and apps, Facebook timelines with more information are the preferred choice. And that's where Facebook is hoping that you'll step in and do their work for them.