During coronavirus outbreak, there's much we cannot control. But we can deal with the misogyny of the 'Wife Joke'

Some people can feel self-pity anytime of the day. Many years ago, I came out of a meeting of activists in Bengaluru and three older women lingered outside to share updates about a dying friend in Delhi. Hovering inconspicuously, I learnt that their friend had cancer, and no family. However, another friend had moved across the country and in with her, determined to make her final months easier.

A young male activist was standing beside me as I eavesdropped. He and I were sort of friends at the time— friendly but not close. He was rapidly turning into someone who preferred followers to friends, so our friendship wasn’t deepening. As we were listening to the bittersweet situation, the man turned to me sharply, hissing angrily: “See, this is how you are supposed to take care of your friends.” In his state of youth and mostly good health (except for the bumps and bruises of his hard rural life) he had — with the speed of lightning — turned the story about the woman with terminal cancer to one about him being neglected by his friends. I backed away slowly from him and his hallucination.

Even for that former friend of mine, however, this must be a difficult time to feel self-pity. If you have a roof above your head and a couple of meals lined up, very few people can currently feel sorry for themselves, knowing how the coronavirus lockdown is ravaging our country.

No one can feel sorry for themselves except for the archetype of the man in the wife joke.

The man in the Wife Joke is, under pre-corona circumstances, always oppressed but alive only due to his own cheerful nature. His wife may be horrible to him but he always lives to laugh another day. The Wife Joke is understandably flourishing in our current state of social distancing and enforced familial intimacy. So in corona isolation, the jokes inform us, husbands are suffering even more than usual. Suffering but gamely laughing. “The nagging has become worse, bro. Without her kaamwali to torture, she is torturing me double, bro. She wants me to teach the kids and wash dishes while she cooks, bro.”

While I don’t disbelieve the rumours that Indian private companies have piled on the load on their Work From Home employees, I also wonder if some of the rumours have been fuelled by the Work From Home class of men who know that free time might now involve doing some housework and childcare. 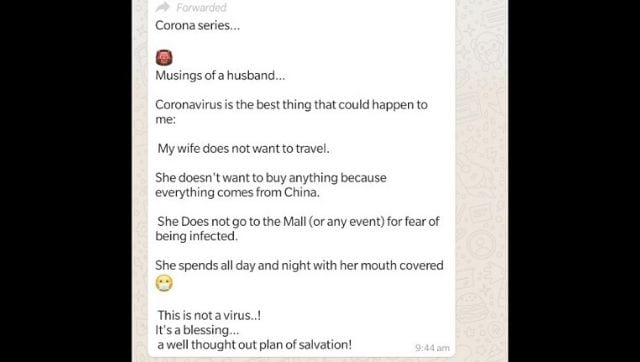 The wife joke has superpowers in the self-pity department. And this explains what happened last week in Malaysia in the midst of the most disorienting global crisis of our lifetimes. According to a Reuters report, “the Women’s Affairs ministry issued advice on how to avoid domestic conflicts during the partial lockdown, which began on 18 March, with a series of online posters with the hashtag translating as #WomenPreventCOVID19. One of the campaign posters depicted a man sitting on a sofa and asked women to refrain from being ‘sarcastic’ if they needed help with household chores. Avoid nagging your husband, another poster said, but use humour or imitate the infantile voice of Doraemon, a blue robot cat from Japan that is hugely popular across Asia. The ministry also urged women to dress up and wear makeup while working from home.” When the world had a fit of rage, the Women’s Affairs Ministry (Women’s Affairs, bro) apologised. In the same week, Malaysian men had also shot to fame for being utterly befuddled while grocery shopping because the government had declared that only the head of the family can leave the house to shop. These two incidents have obviously, nothing to do with each other.

The coronavirus outbreak has reminded us how little control we have over our lives. But perhaps we can deal with the particular form of misogyny that is the Wife Joke?

If you hate the Wife Jokes that flood your social media, you could do what reasonable people do: leave the WhatsApp groups in a huff and report it with an air of triumph on Facebook and/or Twitter.  These are the wins we are willing to take these days.

But for a moment let us be unreasonable. What will end the jokes about the shrewish, nagging wife? Not the lockdown. Not consciousness-raising. Not improved parity in income or assets. In Kerala where the government is being almost comically heroic and admirable during this dehumanising crisis, Chief Minister Pinarayi Vijayan had this to say yesterday: “Women seem to be doing all the household work during the lockdown. Men should share the work a little.” A little.

What can we really do to get away from the Wife Joke? For a moment, let us invoke the spirit of Wendy Cope who wrote —

In that spirit, I write —

Two Cures for the Wife Joke

With my proposed cure we can look forward to a whole new kind of WhatsApp forward in the years to come. It may not be particularly funny but then, neither is marriage.