After campaigning against the “forced conversion of Hindu girls”, live-in relationships and other 'serious' moral issues in Delhi University, the BJP's student wing ABVP is now fighting against another 'social evil': drinking beer. And with that in mind, the group decided to put a stop to a beer festival called Octofiesta organised by the Hotel Radisson Blue in Chennai.

According to a Times of India report, ABVP's protesters barged into Hotel Radisson Blu in Egmore with policemen on Sunday (12 October) and ensured that the event did not go on. The competition which had had a registration fee of Rs 2500 (for each group) called on participants to appear in groups of 5 and drink up beer.

While the police said that they did not forcibly close down the event and were "at the hotel only to prevent any untoward incident," ABVP's Chennai secretary L Muthuramalingam told TOI that his organisation had indeed stopped the event from continuing.

Muthuramalingam was quoted by TOI as saying, "The hotel should not encourage people to drink which is why we stopped them...We are working towards an alcohol-free Tamil Nadu and we will achieve this within a year. We are particularly focusing on students whose development is affected by alcohol."

Meanwhile another Saffron activist Kalyan Raman told the New Indian Express, they took action against the hotel because it "does not have legal sanctity to promote" alcohol. According to the New Indian Express report, the competition was cancelled due to "a directive by the police, as they were unable to defuse the situation between ABVP activist and the hotel staff.

ABVP also found support from state BJP chief Tamilisai Soundararajan who said that "party 'fully backed' the protest. Interestingly this is the first time that the ABVP has acted like the moral police in the city, adds the TOI report.

With the Chennai protest, ABVP claims the event was illegal even though the hotel does have a license to serve alcohol. T Natarajan, secretary of South Indian Hotels and Restaurants Association secretary disagreed saying that, "If they (ABVP) wanted to protest, they should go to the government, which issues licences for such events."

The latest ABVP attempt at moral policing comes soon after the organisation held a campaign in Delhi University where they clubbed together live-in-relationships, 'love jihad' with issues like female foeticide, rape and eve-teasing.

As Firstpost reporter Tarique Anwar had pointed out in his report, that while the campaign talked about a variety of issues the focus of it appeared to on live-in relationships and how they were bad for Indian society. 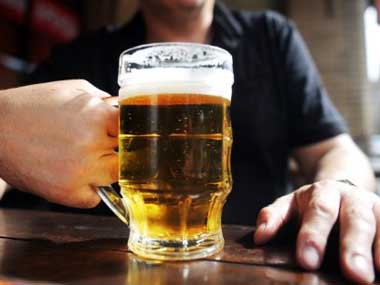 “Live-in relationship is against our culture. It has an adverse impact on the family institution as well as on our society. This relationship has no commitment and legal status. Such relations rarely succeed as anyone can move out at any point of time. The ABVP has planned to form groups of like-minded students in different colleges to aware girls of perils of such a relationship,” ABVP Delhi state secretary Saket Bahuguna told Firstpost.

When asked whether this amounts to moral policing Bahuguna said the students’ body wants to “promote Indian culture” which does not approve of live-ins.

“We are not imposing our ideology on people. We just want to apprise girls of benefits of a marriage institution and detrimental effects of being in such a relationship as it promotes crime against women like torture and other abuses,” he had explained.

The problem with arguments like the ones Bahuguna gives is that they assume that women aren't capable of making their own decisions and once again the 'lakshman rekha' of "Indian culture" is used to define what is acceptable behaviour from a 'good Indian girl.'

Protests against live-ins and beer festivals are at the end of the day not about social problems but rather about infringing on people's individual freedoms, in the garb of Indian culture.

This is not the first time that the saffron unit has protested against issues that they feel are evil ideas which were 'imported' to India from the Western world.

From anti-Valentine's Day rallies to lectures against live-ins to what should be taught in history books, ABVP's outlook on what is acceptable in India has always been restrictive but it seems that with the current victory of the BJP, it seems to feel it has a license to make its claims more loudly.

In the Chennai case, the police chose not to do anything to stop the ABVP activists (despite the fact that neither the BJP or ABVP have a major presence in the state) and instead decided that the better solution was to close down the event. One wonders, how police in other states where ABVP has a stronger presence, will react should they start protesting against other anti-Indian culture values.