A study conducted by Prof TV Ramachandra and Dr Bharath H Aithal of the Centre for Ecological Sciences at the Indian Institute of Science (IISc) predicts that Bengaluru will become a dead city in five years. Unplanned growth will make the city unlivable, the study said. The study bases its prediction on the following findings: There has been a 525 percent growth in built-up area in the last four decades, 78 percent decline in vegetation, and 79 percent decline in water bodies.

What was once the Garden City can no longer be called that. It’s a concrete jungle filled with dust and choked with vehicle exhaust. Water bodies have disappeared, trees have been cut down to make way for buildings. The city has expanded outwards with little planning. Roads are poorly maintained and inadequate; groundwater levels are plunging due to over-exploitation; and there is no drainage of which to speak.

Hundreds of international players have invested a lot in the city and this is not the kind of headline to which they want to wake up. Some — mostly those who rule Bengaluru — believe Ramachandra’s prediction is alarmist, but others like this writer, who have lived here for years, feel the study is accurate except that it has got its timelines wrong. Bengaluru, according to me, is already dead. It was killed by corrupt politicians, greedy real estate sharks, and a decayed administration that has allowed everything to hurtle downhill.

Ramachandra’s research is based on satellite data and ground observations and the study uncovers a few facts; let’s look at them one by one: 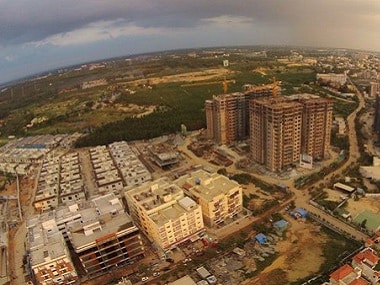 925 percent increase in concretisation since 1970

The problem is that most of this is unplanned. Homes are built in places with limited road access, no water supply, no sewage lines. In most homes in the greater metropolitan area, water comes from borewells and sewage flows into the nearest lake. Homes are not the only offenders, commercial buildings are built without parking arrangements, which means cars are parked on service roads and main roads, obstructing traffic.

Ramachandra told Deccan Herald, “It’s disturbing to see private developers dominate government decisions. The norm to keep at least 15-20 percent of the city as open space is ignored, storm water drains and water bodies have been narrowed. At least now, the government should wake up and get its priorities right to make Bengaluru a sustainable city.”

Nobody can give a clear estimate of the state of Bengaluru's lakes, because although many do exist on paper, in reality a lot of them have been filled up and built upon. According to one estimate, Bangalore had 261 lakes in 1961, which had reduced to around 80 by the mid-1980s. Today, there could be less than 25. According to Ramachandra’s research, 54 percent of lakes were encroached for illegal buildings. The ones remaining are in poor health, 66 percent are fed by sewage, 14 percent are surrounded by slums, and 72 percent showed loss of catchment area due to construction. Even today, construction debris is dumped into lakes and lakebeds, a prelude to encroachment.

78 percent of greencover has vanished in a decade.
According to Ramachandra, urbanisation rose 125 percent from 2000 to 2014; all at the expense of the city’s once-famous greenery. Trees have been cut down mercilessly to make way for road widening and construction. Even parks are not safe. A few years ago, legislators were all set to grab a piece of Cubbon Park to build a club. Luckily, citizen activism thwarted that plan. Bengaluru’s human population is currently 95 lakh against a tree population of around 15 lakh trees.

That works out to around one tree for every seven humans. Ramachandra told Deccan Herald that “Based on age, every day one person exhales 540-900 grams of carbon dioxide and one hectare of trees takes in close to eight tons of carbon dioxide. So based on that calculation every person needs eight trees. You can imagine how pathetic the situation is.”

Population is exploding, from 65 to 95 lakh in 15 years and counting
Has Bengaluru’s IT boom ruined the city? IT companies came to the city because they felt the city was a rich catchment area for talent. The weather was great, a pub culture was developing, the city was small and you could drive from one end to another in less than 30 minutes. Ramachandra believes that while the IT industry increased the influx of people from other states and the city, its expansion was not planned at all. The onset of the BPO industry led to an explosion of cabs on the roads.

The arrival of large numbers of drivers and construction workmen  created associated sociological and law and order problems. An inordinately high number of rapes are committed by drivers. Only last week, a cab driver abducted a young Manipuri woman from a public place; scooping her up and carrying her to an empty building where he proceeded to molest her. The incident was so bizarre that few people would have believed that it happened if it hadn’t been captured on CCTV.

They are occupying our drains
Forget the lakes, ruthless builders are even encroaching on drains. In many places, natural drains have been covered and built over. This is a problem on two fronts. One, the water has nowhere to go, which makes flooding a common phenomenon during rains. A Chennai-like disaster is waiting to happen in Bengaluru. The second problem is that these drains often take rainwater to the lakes. By filling up the drains, water flow to the lakes are cut off, leading to their drying up and getting encroached upon. Where have all the roads gone?
The less said about Bengaluru’s roads the better. They are mostly inadequate. With builders running rampant, very few buildings have proper parking. That means, cars are parked on the roads. Pedestrian pavements don’t exist. Potholes are never filled. Traffic police do not have the numbers to control the exploding numbers of vehicles (60 lakh, at last count). Thanks to ill-maintained roads, it takes forever to drive even short distances.

Sadly, no one cares

The two civic bodies that are meant to take care of Bangalore’s civic issues are the BBMP (the Corporation) and the Bangalore Development Authority (BDA). Both are corrupt and inefficient and it really does not matter which political party is in power. There once used to be a designated green belt around the city in which no construction was allowed. Nobody seems to know what happened to that. The city has no proper policy in place for land and water use.

Given all the problems that the city suffers from, Ramachandra's dire prediction may actually seem optimistic. When cities begin to die, most people don’t realise that it’s happening. A dead city does not mean that people are no longer living in it. It means that it is no longer worth living in.

In this writer's opinion, we have already reached that point.