Being gay is God's best gift to me: Apple's Tim Cook comes out in powerful op-ed

When Tim Cook took over Apple from Steve Jobs, reports said, Cook will "mark a new era not only for Apple but for gay progress." He was called the most powerful gay man in Silicon Valley. 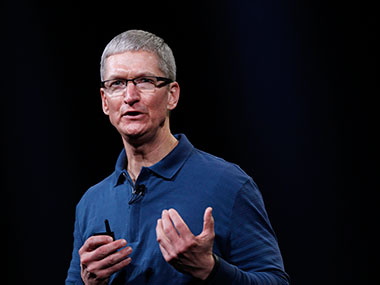 Tim Cook is seen in this file photo. Reuters

But Cook didn't deny or admit to it, until now though there were a lot of articles speculating about his sexuality.

In a powerful op-ed in Bloomberg Businessweek, the Apple CEO has publicly come out as gay.

"While I have never denied my sexuality, I haven’t publicly acknowledged it either, until now. So let me be clear: I’m proud to be gay, and I consider being gay among the greatest gifts God has given me," he writes.

Cook says that being gay has made him "more empathetic, and it has given him the confidence to be himself and rise above adversity and bigotry. "It’s been tough and uncomfortable at times.... It’s also given me the skin of a rhinoceros, which comes in handy when you’re the CEO of Apple," he writes.

He also writes about the inequality that exists in America based on one's sexual orientation--firing people from work, evicting tenants etc.

Cook admits that coming out wasn't an easy choice and privacy remains very important to him.

However, this is why he decided to come out even though he does not regard himself as an activist:

"If hearing that the CEO of Apple is gay can help someone struggling to come to terms with who he or she is, or bring comfort to anyone who feels alone, or inspire people to insist on their equality, then it’s worth the trade-off with my own privacy."

As soon as the piece went online, it took Twitter by storm. And, most of them have been very supportive. Here are some of the reactions:

There are times when opening up and reaching out trumps privacy - and this is definitely one of them. Kudos @tim_cook http://t.co/MELUrIAvRY

Thanks @tim_cook for the wonderful BW article. Coming out as a visible role model will be inspirational for so many people.

When public figures don't have to write long articles explaining their sexuality, then we'll have made real progress. http://t.co/bwbYNbt2v0