A store named Hitler: It's dumb, not wrong

Rajesh Shah is laughing all the way to the bank.

His Hitler clothing store in Ahmedabad is now international news even though it’s not illegal to name anything after Hitler in India.

Shah is obviously enjoying the uproar even though he says it’s a headache. It’s great for business. However instead of having the guts to say he did it for shock value, Shah, a 32-year-old engineering graduate and former stockbroker is claiming he didn’t really know anything about Hitler’s crimes when he named the store. Even a Holocaust denier like Ahmadinejad does not proudly tout that level of ignorance.

Shah does not explain why the swastika on the signboard was tilted 45 degrees in the Nazi style when the store opened. Post the uproar, it has now suddenly gone vertical like the Hindu swastika. Shah let slip the real reason when he explained why he would not change the name. “We wanted to catch people’s attention by hook or by crook and have succeeded.” Had Shah named his store after any other mass murderer, say a Pol Pot, no one would have batted an eyelid. He obviously chose Hitler because he knows Hitler is a guaranteed attention-getter. It worked. 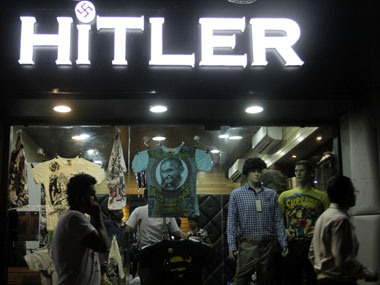 Shah obviously chose Hitler because he knows Hitler is a guaranteed attention-getter. It worked. AP

All that free publicity cannot be bad for any business. Every press release the Anti Defamation League (ADL) puts out from New York only helps drum up more press. The ADL says it’s worried about Hitler’s name “seeping into India's popular culture without any appropriate context.” But what should be more worrying is not a clueless attention-grubbing Rajesh Shah but those Indians who do know their Hitler and admire him.

In an interview with Tablet magazine Fulbright scholar Sadia Shephard says there is a fascination with Hitler in India because of some “parts of the population that have found parallels between Hitler’s view of racial purity and the desire to have a state that is entirely Hindu.” Bal Thackeray famously said “I do not say that I agree with all the methods he employed, but (Hitler) was a wonderful organizer and orator…What India really needs is a dictator who will rule benevolently, but with an iron hand.” His nephew Raj made headlines for wanting to introduce a Heil-Hitler-style Jai Maharashtra salute within the rank and file of his own party.

There has always been a fascination with the dictator who will make our trains run of time, claim our rightful place in the world and put an end to what’s regarded as minority appeasement. The morose weakness of Manmohan Singh presiding over a United Progressive Alliance of Corruption has only whetted that hunger in certain sections of the population for a strict daddy figure who can just take charge. That hunger is cause for worry. Kesubhai Patel  was clearly trying to raise the spectre of that danger when he called Narendra Modi a Hitler during his “parivartan sammelan” earlier this year.  “He (Modi) is Hitler. His style of functioning matches that of Hitler's. After coming to power on public support, he is snatching away people's rights and centralising all power to himself.”

Now add to this Mein Kampf’s enduring popularity as a road side bestseller in India and not just among right-wing nationalists. Shephard talks about its appeal "among India’s business students who dispassionately view the book as the diary of an extremely effective manager." That’s a kind of an unholy confluence that should worry all right-thinking folks, not just Jews. But that’s a bigger, pricklier and far more incendiary an issue than a clothing store named Hitler.

The problem with the ADL is that is has the same kneejerk reaction to all things Hitler-related viewing everything through the prism of anti-Semitism. What ADL does not acknowledge is that of all the countries in the world with Jewish populations, India is one of the few that didn’t persecute them. Talking about India’s declining Jewish population, octogenarian Flower Silliman, one of the last 22 or so Jews left in Kolkata, said, “At least we didn’t vanish here because of anti-Semitism. India can be proud and say that the Jews left because they wanted to leave and nobody told them to go.” So a Zee TV serial called Hitler Didi here exists in a different cultural context than it does in Germany or even America (where ADL protests changed its name to General Didi). Hitler Didi might sound like it’s making light of a monstrous leader but ultimately that’s one way to truly destroy his power instead of turning him into a Voldemort creature who cannot be named.

None of this applies to Rajesh Shah and his clothing store. As far as we know he’s not making a political statement. Nor is he trying to be subversive. Shah says he thinks it’s an “offbeat and catchy” name because that’s what they used to call his business partner’s overly strict grandfather. (Why one would name a  clothing store after an old disciplinarian grandpa is something Shah has not bothered to explain.)

Shah should not be censured or censored. That’s giving him way too much importance. He does not deserve to be the topic of conversation between the Israeli consul in Mumbai and the chief minister of Gujarat (ohh, the irony of that encounter!) He should not be turned into some kind of freedom of expression martyr. He does not even need to be educated because an engineering graduate in the 21st century who is not embarrassed to admit he didn’t really know about Hitler is either lying or beyond the reach of education.