When Hindus, Sikhs and Muslims were forced to leave their home and the land of their forefathers, what did they carry as souvenirs? Nothing, but a few seeds of memories. But what they left behind in 1947 was an immeasurable wealth of culture — a syncretic lifestyle evolved and enriched over centuries.

Not long back, communities were bound by spiritual values — by the underlying thread of humanity and mutual respect. All this was wiped out. Yet, a few residual shades remind one of the possibilities of what could be. At the last surviving Hindu temple in Kabul, the Asamai temple, the Bhagwat Geeta, the only enshrined scripture, is in Gurmukhi. Although, the priest at the temple can read only Urdu. A reminder that languages and scripts are not owned by specific religions, but are a heritage for humankind. At Asamai temple in Kabul, the only enshrined scripture, Bhagwat Gita, is in Gurmukhi. All pictures courtesy Amardeep Singh

Unfortunately, the exiled communities in alien lands found that the seeds of memory fail to grow into trees that would bear the fruits of culture-left behind. In two generations, the culture is lost, even when re-planted on a different land. “Look at all the Gurdwaras of north Punjab, it's all marble and gold. It’s sad if our younger generation starts believing that our forefathers knew so little; if we present a blinkered view in the name of our heritage. What about art, architecture, forts, havelis, temples, Gurdwaras, battlegrounds and the human stories?” rues Amardeep Singh, Singapore based self-taught writer, photographer and now a documentary maker who produced two coffee table books, Lost Heritage: The Sikh Legacy in Pakistan, followed by The Quest Continues: Lost Heritage: The Sikh Legacy in Pakistan, based on his photographic documentation of Sikh legacy in over 90 towns and cities across five states of Pakistan.

Under the shadows of guns, Amardeep is shooting for a documentary in Afghanistan, tracing the legacy of love and brotherhood of Guru Nanak’s footprints across nine countries. In doing so he is challenged with unscripted events on a daily basis. The first one being to visit the actual sites themselves where the founder of the Sikh religion addressed congregations of diverse faiths between 1500 AD to 1524 AD. Amardeep has to chart out his own course by making human bonds which alone could pave his way ahead. A vast geographical area where Nanak preached his messages is now a conflict zone. Holding an AK 47, Khalida appeared to be an ‘iron lady’, who opened her home to offer hospitality and shared fond memories of growing up with Nanakpanthis of Khost ( Afghanistan).

He attempts to document the impact of Nanak’s words five centuries later; to record the remnants of syncretic culture lost to the melee of the Partition and other geopolitical developments. His work is neither political nor academic. He narrates tales of people and places that survived the storms of hatred and destruction to still blossom with love and brotherhood.

Post-Partition, Guru Nanak’s words have been boxed within the Sikh identity; whereas Khalsa was just one arm of Nanak’s broad humanism. His legacy was larger than any religion across countries he travelled — present-day Iran, Iraq, Saudi Arabia, China, Tibet, Sri Lanka, Pakistan, Afghanistan, Bangladesh and India. For each geographical unit, Amardeep encounters hurdles on every step, be it visas, permissions or the risks involved in entering conflict zones. In these countries, he is tracing the legacy of a borderless land Nanak traversed in five major journeys he undertook to cover roughly 28,000 km, mostly on foot. His companion was Bhai Mardana, a rebab player of Muslim faith, from his hometown. “In his times, he would have travelled in and out of India-Pakistan border more than 15 times, to Afghanistan, three times, Tibet, twice, and so on, but then he didn't have to cross borders and present visas. He travelled to Mecca, Medina, Baghdad, Jaffna, Anuradhapura in Sri Lanka, Tibet, the traces are still there — at Hinglaj temple, Balochistan, Pakistan, Imam Raza Shrine, Mashhad, Iran, or Sita Eliya, Sri Lanka.” On a slab of 1908 at a Nanakpanthi temple in Sukkur (Sindh) the Gurmukhi invocation ‘ek onkar’ co -exists with English that mentions some Hindu names and Hatvanki scripts.

India’s independence was gained at the cost of the culture of the Indus belt, where the religious identities were blurred among Nanakpanthis — Hindus, Jains, Buddhist, Sikhs and the Sufis. Among the Sindhis, Balochis and Hindus, Nanak was deeply entrenched along the Indus belt. Today that culture is wiped out of the memory, communities are fragmented, and are boxed into religious compartments as about 80 percent of the land where this culture evolved is now in Pakistan. When people of this land were forced to migrate and were settled in the Gangetic plains, their syncretic nature was lost. As such, the Partition of 1947 raised religious identities to a new pitch, undermining other legacies, observes Amardeep.

As the world prepares to celebrate the 550th birth anniversary of Guru Nanak Dev in November 2019, Amardeep travels to 150 inter-faith sites, visited by Nanak. “That he preached monism, not monotheism; to him, religious faith was secondary to humanity. This has been forgotten even by his followers,” he says. Although his documentary will be ready for release only by November 2020. 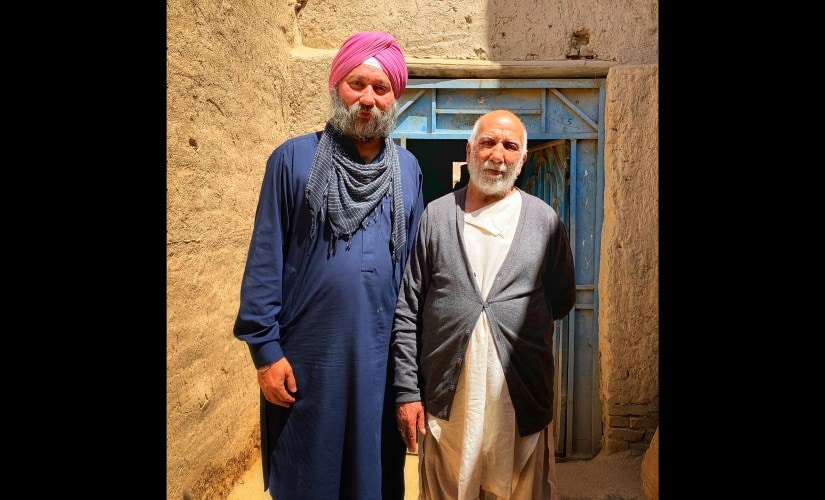 Amardeep Singh with Dr Raghunath, the only Nanakpanthi in Kabul.

Nanak’s verses are about spirituality, the history of his travels was documented 50 years after his death by Bhai Gurdas, based on oral traditions. The core repository of these travelogues is Janamsakhis and Udasis. “It's a maze which doesn't have consistency, because they were written by men of faith,” observes Amardeep, who has to stitch together diverse tales, to join the dots and lend his narrative an element of objectivity. “Though historians have written extensively about these travels, some scope for oral tradition has to be allowed for the sake of narrative."

The narrative of Nanak’s travels is huge and the canvas vast. Mapping the routes alone took months; shooting across nine countries will take about a year’s time. The film is titled Allegory — A Tapestry of Guru Nanak’s Travels, and will attempt to unravel the hidden meaning behind the journeys Nanak undertook and spent two decades of his life in spreading the message of universal brotherhood. “I want the younger generation to have access to the true identity of Guru Nanak, not boxed within religion, but of his greater philosophy and spiritualism, that is still evident in places he visited. There are still traces of the values he preached; lived and experienced by Nanakpanthis, spread across regions.” Forever on the edge-filming Allegory.

Pockets in Balochistan, Sindh, NWF, across the Indus belt — Nanakpanthis have multiple identities. They are Nirmala, Udasi, Sehajdhari, who are not turbaned. Then there are Pashto Sikhs who wear a turban, but are very different from the Sikhs of North Punjab. There are Jogis too, who are followers of Nanak. Why multiple identities of Sikhs disappeared from the Gangetic plains? Amardeep unravels the underlying unifying thread of Nanakpanthis, not boxed by religion, by going back to the sites of Nanak’s travels. About 50 percent of the sites are inaccessible due to multiple reasons; mainly armed conflict. Which makes travelling back in time and space all the more relevant — to understand why in more than 500 years since Nanak, humanity could not let go of the essence of his words.

There are instances that rekindle hope in the middle of conflict zones. For instance, Amardeep comes across Dr Raghunath, a Nanakpanthi Hindu, who hasn't left Kabul against all odds to serve the natives of the land. He helps the film crew in locating the abandoned sites across Kandahar region Nanakpanthis had made in the memory of Guru Nanak’s travels. Everything is not lost.