A history of women in comics: How cartoonists politicised art to fuel campaign for women's suffrage

In 1909, Rose O'Neill dreamt of Kewpies one night and finally drew them on the Christmas issue of Ladies’ Home Journal. The Kewpies were elfin kid characters that revolutionised cartoons, their meteoric popularity sparking comparisons with Mickey Mouse. Turns out O'Neill wasn't the only one obsessed with them; there was suddenly Kewpie-inspired merchandise that people were willing to queue up for.

O'Neill had in 1896 already become the first comic artist to publish a strip, seen in the magazine Truth. It was a simple drawing of a woman overhearing a fight between the publisher and an irate customer. However, with Kewpies, her politics burgeoned. A cogent voice in the growing chorus of suffragettes, she used Kewpies to cement her advocacy for women's suffrage. Even though drawing cute and cuddly kids was considered one of the more 'acceptable' jobs for women in pre-World War I America, O'Neill was able to revolutionise the idea of art as activism with what was expected of her: stick to the 'womanly' careers in art and illustration if they wanted to work. Kewpies were not just cuddly kids anymore. They had a cause to further. Source: Wikimedia Commons

Like O'Neill, the history of America's women cartoonists, most of whom were suffragettes, is a story for the ages. However, even though over a 100-years-old, certain perspectives on suffragettes have also, unfortunately, stood the test of time. And seemingly, a look at the way history treated certain avant-garde women cartoonists in the years preceding World War I can answer several questions on why the modern feminist movement is met with still met with hostility. "There was an attempt to create this idea that suffragettes are just lonely, frustrated, angry women who have nothing better to do. That is not very different from what is said about feminists these days...," says artist and filmmaker Aarthi Parthasarathy, in her talk exploring the representation of women in comics, at the Tata Literature Live! in Mumbai.

Popularised by some of the most successful American illustrators at, pictures of cuddly, round-faced kids were an indispensable part of the women's suffrage movement. Before O'Neill, Grace Drayton had already introduced them in her first strip, Naughty Toodles (1903). "It set the style for more than 30 years of comics by the artist...Though the names of the comic strips changed through the years, essentially the same cherubic kids run through her comic pages," writes Trina Robbins in her recording of a century of women cartoonists, Pretty in Ink: North American Women Cartoonists 1896–2010. Round-faced kids were a 'masterstroke' as they defused the subject of women's suffrage.

In an America where the presence of a huge gender gap was being acknowledged amid the anxiety of being at war, bringing "cherubic kids" to comic strips was a major coup in getting other artists to join the movement for women's franchise. "It defused the intensity of the subject which was anyway contentious, and secondly, it brought children's rights and women's role as mothers to the fore," Parthasarathy adds.

Around the same time, anti-suffrage propaganda began to crop up in the United States with the proliferation of artwork that turned violent towards activists. Interestingly, the same celebration of violence can be traced in the reception of the Black Lives Matter movement. In one such poster, a woman was famously seen running behind Satan with a "votes for women" placard. A suffragette more frightful than Satan himself? Source: Getty Images

Another poster, titled the Appeal of Womanhood, originally created by Harold Bird for a national league formed to oppose women's suffrage, showed a 'lady' denying the right to vote. "There was and still is this irrational fear that if women gain rights, men somehow lose them," Parthasarathy says. However, the emerging class of suffragettes comprised activists who responded to this cynicism by subverting the same inflammatory image of women demanding to be enfranchised, as seen in Louise Jacobs' rendition of 'No Votes Thank You'. Fortunately, Jacobs' argument for why women must get to vote has come to be more recognisable than the original. 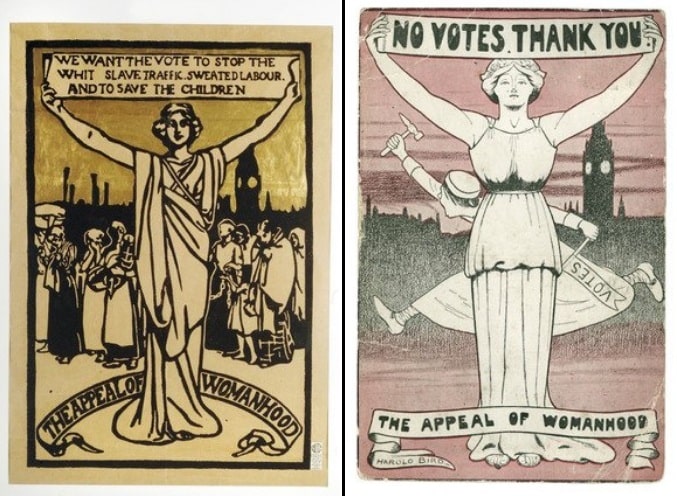 As puerile as it was, the diatribe against women's suffrage elicited scathing responses from the Artists Suffrage League. The collective was dedicated to designing material to be used in rallies and protests demanding the right to vote. The group published an illustrated poem, Beware! A Warning to Suffragists, which famously derided the popular anti-suffrage argument that women were 'unfit' to vote, even though they were helping stabilise the dwindling economy by working in factories:

Don’t earn your living –
If you can,
Have it earned for you
By a man.
Then sit at home
From morn till night,
And cook and cook
With all your might

While women's suffrage was established wholly in America in 1920, several other artist networks emerged and collaborations flourished. Incidentally, women started entering the workforce in great numbers which proved to be almost strategic with The Great Depression. In the comic world, the women artists who fought for their rights before the First World War, set the stage for more progressive illustrators to continue their legacy. And so, corsets went back into the closet as fashionable, wisecracking women characters took over pages.