Chart: Educomp zooms on Rs 410 cr deal but exposure to FCCBs a concern

Educomp Solutions today shot up 15 percent to Rs 215 after the company said it has been able to securitise its receivables. The announcement said that Educomp Solutions has received a sanction towards the buy out of its receivable from one of the leading public sector banks. The gross amount sanctioned is Rs 410 crore at a limited recourse of 20 percent. The company is expecting sanctions from other banks towards the securitisation programme.

Securitisation helps the company receive the money for the fees it would collect over the year. The banks give this money for a fee and charge interest on it. Against this amount they keep a margin, which in the case of Educomp is 20 percent. 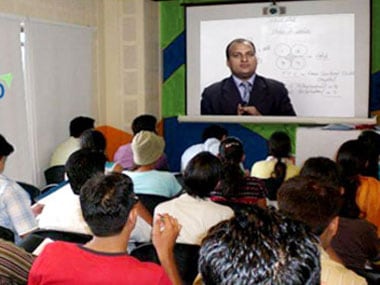 Analyst had downgraded the counter on two main reasons. One was its exposure to FCCB (Foreign Currency Convertible Bonds) and second was due to its very high debt days.

Though Educomp will be able to improve its financials in the short term through securitisation, they will continue to remain affected by the high exposure to FCCBs. In the second quarter of the current fiscal the company has been hit to the extent of Rs 37.5 crore for foreign exchange fluctuation provisioning. Analysts expect the company to raise another round of FCCBs to repay its earlier bonds.

For more information about the stock listen to our podcast below: