Controversial Islamic preacher Zakir Naik, has slapped a Rs 500-crore defamation case against Times Now editor-in-chief Arnab Goswami for running a “hate campaign” and “media trial” against him. In the notice, issued by Naik’s lawyer Mubin Solkar, the preacher has also levelled a few other charges against the channel including “creating enmity and hatred between religious communities” and hurting the “religious sentiments” of Naik and the Muslim community through Goswami’s statements on the channel.

“Moreover you have also hurt the religious sentiments of the Muslim community which reveres (Naik) and holds him in high esteem,” the notice goes on to say.

Firstpost has reviewed a copy of the notice.

Here is a Copy of the Notice Issued by Naik 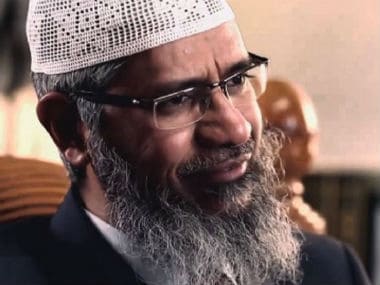 The English-speaking preacher, currently abroad, is facing investigations by various agencies for allegedly inspiring terrorists affiliated to the Islamic State to conduct attacks including the recent Dhaka attacks. Ever since the accusations were made against him, Naik has not returned to India and has addressed the Indian media only through video appearances. The radical preacher has been blaming the press for a ‘media trial’ but this is the first time Naik is slapping a legal notice against any media company in connection with the recent allegations.

Following the accusations, the governments in India and Bangladesh had taken certain action against Naik’s Peace TV. Naik is also banned in certain countries like the UK for his alleged hate speech. In his defamation notice, Naik’s lawyer has blamed the channel citing somewhat similar charges being currently faced by the preacher such as “promoting disharmony and feelings of hatred, enmity and ill-will between different religious groups and thereby, destroying the secular fabric of our country.”

Naik found himself in more trouble when, recently, a joint team of the Kerala Police and Maharashtra Anti-Terrorism Squad arrested Arshid Qureshi, the guest relations officer of the Naik-run Islamic Research Foundation (IRF), for alleged radicalisation of youths. IRF allegedly receive foreign funds from countries including Saudi Arabia for its operations. There have been allegations that IRF is using this money for other activities such as converting people to Islam.

According to this Indian Express report, which quoted police sources, Naik’s associate Qureshi facilitated the conversion of 700-odd people, including those from Kerala at the IRF. According to IRF website, the organisation is a registered non-profit public charitable trust. It was established in February 1991 to promote ‘Islamic Da’wah’ — the proper presentation, understanding and appreciation of Islam — as well as removing misconceptions about Islam among less-aware Muslims and non-Muslims. IRF claims to reach millions of people worldwide through international satellite TV channels, cable TV networks, internet and the print media, the website says.

Hindustan Times, quoting unnamed officials in the special branch of the Mumbai police, has reported that Naik’s IRF has allegedly converted around 800 people to Islam by paying them using foreign funds. Naik, on his part, has maintained that his speeches were always taken out of context by the media to blame him as a terrorist sympathiser. However, many Islamic scholars and Muslim clerics had spoken against Naik, criticising that his speeches misguide the members of the community.

A self-proclaimed expert of comparative religion, Naik attracts large crowds with his ability to recall versus from scared texts and his speeches typically argue in favor of the religious supremacy of Islam over other religions. Naik had earlier created a controversy earlier for his comments on country’s National Song, Vande Matram. Naik had said both Hindus and Muslims should say 'Vande Matram' since both religions advocate against idol worship including, according to Naik, worshipping the motherland.

Early this month, Union minister for Information and Broadcasting, Venkaiah Naidu had said that appropriate action will be taken against the preacher if found guilty. "The Home Ministry will study (his speeches). It will take appropriate action after studying them. His speeches, as being reported in the media, are highly objectionable," Naidu told reporters in Delhi.