Zakir Naik is not a terrorist, but he can do great damage to Islam

Amid increasing controversies on the extremist sermons of the radical televangelist Dr Zakir Naik aired on his Peace TV, the note of caution on part of the Indian Prime Minister assumes significance. Addressing the students at the University of Nairobi, PM Narendra Modi has warned that "preachers of hate and violence are threatening the fabric of the society", as reported in The Times of India.

What is more to the point is his appeal to the youth to articulate a “counter-narrative to extremist ideologies”. This exhortation stresses the need to counter radicalisation on an ideological front, rather than merely denouncing or calling for a blanket ban on certain extremist preachers.

That an effective counter-narrative to extremist ideologies should be built with an active role of the youth is a concrete suggestion that PM Modi has made amid the run-of-the-mill statements on the issue of the controversial Islamist televangelist Zakir Naik. Remarkably, he seems to make an underlying point which applies to all the extremist and hardcore preachers and radical televangelists, without calling their names. That is to say, the knee-jerk reactions are not going to help us face the real challenge of extremist preachers and hate-mongers. In order to dismantle their influence, their hardcore ideology which is on the rampage should be rebutted with a well-established counter-narrative. Youth must play their role in refuting the violent theological underpinnings of hate sermons, channelizing the peaceful resources in their religions, national secular culture and democratic values. 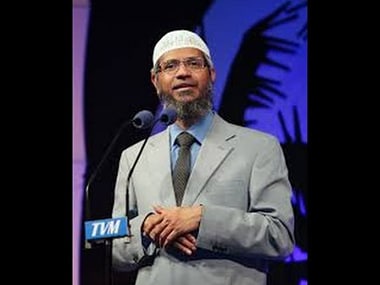 Amid increasing controversies on the extremist sermons of the radical televangelist Dr Zakir Naik aired on his Peace TV, the note of caution on part of the Indian Prime Minister assumes significance. Image courtesy: YouTube

Extremist preachers and radical televangelists like Zakir Naik, or anyone else for that matter, are indeed not ‘terrorists’. Rather, they are ideologues of chauvinism, radicalism, exclusivism, xenophobia and religious bigotry breeding the grounds for terror. Therefore, merely banning them will not serve the purpose. The gullible youth will continue to be fed on the same ideologies being preached by the likes of Dr Naik across the world. The mainstream Islamic scholars will have to come out to confront them, rebutting their twisted religious underpinnings, theological misinterpretations and extremist doctrines, point by point.

What attaches due importance to the Indian Prime Minister’s comments on the extremist preachers is the recent radicalisation of the six young and educated attackers of Dhaka who were allegedly motivated by Zakir Naik’s sermons. Given this, it is not difficult to see why the PM has made a special appeal to the youth to “play an important role in building a counter narrative to extremist ideologies.”

Extremist preachers threaten the entire society, influencing the young and the old alike. But the gullible youth with impressionable minds are more vulnerable to their pernicious propaganda. The energetic and dynamic youths who give in to the inflammatory speeches of their religious gurus, try to translate their extremist teachings into practice. In a crazy bid to please their preachers, some of them get carried away to resort to weapons, sometimes going to the extent of suicide bombing to serve the ‘holy cause’ taught to them.

PM Modi has warned against the preachers of hate and violence on his tour of Africa. Interestingly, Dr Naik is also at present on his visit to the African countries for the next few weeks. Though the PM did not mention the name of Dr Naik in his speech in Kenya, it is a wake-up call for Muslims in the African countries.

There are many extremist preachers like Zakir Naik in the region who are threatening peace and pluralism in the African Muslim societies. Boko Haram’s jihadist influence in the region has caught the imagination of the young, poor and starving Nigerian Muslims. More and more young people are falling prey to the extremist Salafist sermons in mosques and religious gatherings in various African Muslim countries. A well-known radical Salafist preacher in Africa is Muhammad Al-Jazouli. This Sudan-based extremist cleric has delivered several speeches and Friday sermons (khutbas) justifying the wanton killing of non-combatant civilians including children and women, if they are kafir (infidel). In one of his Friday sermons, he provoked the Muslim youth to resort to violence and killing misguiding them with misinterpreted prophetic sayings (hadiths).

He stated: "Under Islam there is no distinction between combatants and civilians and thus infidel women and children can be harmed and even killed in the militant attacks."

In his sermon, al-Jazouli quoted a hadith report attributed to the Prophet of Islam, clearly attempting to wrongly interpret the text of the hadith (Prophet’s sayings), the second source of Islamic teachings after the Quran. Just like the war-time verses of the Quran, many contextual sayings attributed to Prophet Muhammad (pbuh) are brazenly distorted and misused by the extremist Islamist preachers provoking violence, peddling hate, havoc, intolerance and misogynism.

Surprisingly enough, young and naive Muslims in Africa are getting influenced by the hate preachers even when the moderate and spiritually-inclined Sufi scholars are committed to tackle the onslaught of the radicalization in the region. Only in Morocco, some 50,000 imams of mosques, after they showed the extremist Salafist influence, have been replaced. Modern youth in Algeria and Morocco are being trained to resist the Salafist extremism penetrating into the Muslim societies. A “Religious Guidance Support Plan” has been framed with scrutiny to closely monitor religious programmes on TV channels, Friday sermons and Islamic discourses delivered by the preachers and televangelists in the region.

According to Magharebia, an online Arabic media outlet covering the news of North Africa, some 1,300 senior imams and spiritual Islamic counselors were trained to prevent people who come in the mosques from all forms of Islamist discourses inciting religious bigotry and intolerance. Basically, the idea was to prepare the imams to preserve the universal values of Islam in the African mosques, based on the Sufi Islamic worldview which is contrary to the Salafi takfirism (declaring others disbeliever and apostate). The Islamic Affairs Minister of Morocco, Mr. Ahmed Toufiq once said that "takfirism is constantly invading the minds of our young people. Therefore, we seek to tackle all forms of continued exploitation of religion, with an aim to root out Takfirist ideology at its core."

Despite this gigantic task being done by the moderate Muslims in the African countries, the extremist fringe of the Islamist preachers have been influential enough to lure the youth. Their success emanates from their skillful misinterpretation and indoctrination of the Quranic verses and hadith quotations cited out of context. Like Al-Jazouli did in his speech, nearly all extremist Islamist preachers extensively quote the medieval Islamic jurisprudential rulings, that too out of the context, preaching the ideology of puritanical fundamentalism which is antithetical to the moderate narrative of Islam. Zakir Naik went some steps ahead on his Peace TV. He did not only misinterpret the references from the holy Qur’an and hadith, but also coined quite new, nefarious and pernicious religious underpinnings in some of his speeches spewing venom. Here are a few quotations from his talks widely available on the internet:

"Quran allows Muslims to have sex with female slaves."
"Bible has pornography, teaches how to rape and how to even gang-rape."
"We (Muslims) know for sure that only Islam is the True religion in the eyes of God. … Therefore … we do not allow propagation of any other religion."
"The only requirement for marriage in Islamic Sharia is that girl and boy both must attain the age of puberty that can occur at age 12, 11 or even 10."

This is how a radical Salafist televangelist in India has been misguiding Muslim youth across the world, while at the same time, causing greater defamation to Islam than the Islamophobes, and tarnishing the image of Indian Muslims in the global media.

The author is a scholar of Comparative Religion, Classical Arabic and Islamic sciences, cultural analyst and researcher in Media and Communication Studies. Contact him at grdehlavi@gmail.com