Santosh Yadav will be the first woman chief guest at the RSS event in its 97 years of existence. Image Courtesy: @ITBP_official/Twitter

The Rashtriya Swayamsevak Sangh (RSS) is making history of its own.

The RSS on Thursday announced that it had invited acclaimed mountaineer Santosh Yadav to be the chief guest at its annual Dussehra function in Nagpur. This is the first time that the collective in its 97 years of existence has invited a woman chief guest to the occasion.

The event scheduled for 5 October will be held at Nagpur’s Reshmibagh Maidan and will be inaugurated by RSS Sarsanghchalak Mohan Bhagwat.

The annual event is considered to be of great significance for the RSS, as the Sangh was founded by Dr Keshav Baliram Hedgewar on this very day back in 1925. The speech given by Mohan Bhagwat during the event is of importance and is widely tracked by many as it lays out its views on a variety of issues and also outlines the agenda for the RSS for the year.

As the RSS prepares for this grand event, we take a closer look at their choice of chief guest — Santosh Yadav — and also their past selections.

Who is Santosh Yadav?

Santosh Yadav, 54, hailing from the Joniyawas village of Rewari district in Haryana, is the first woman to scale Mount Everest twice — in 1992 and 1993.

When she took to climbing the mountain in 1992, she was also the youngest to do so then. That’s not all; she was also the first woman to climb the 29,035 feet high mountain from its Kangshung face — the eastern-facing side of the peak, one of the Chinese sides of Mount Everest.

Yadav says her becoming a mountaineer was a complete fluke. She has been quoted as saying that her family wanted her to get married at the age of 14, as that was the norm then. However, she decided to stay in a hostel in Jaipur and continued with her studies.

She adds that the view from her hostel room — she could see the Aravalli range — fascinated her and also prompted her to learn mountaineering.

According to a report in The Hindu, she paid no attention to the complaints by her instructors at the Nehru Institute of Mountaineering in Uttarkashi about her ‘tiny lungs’ and her being underweight and continued with her training.

In 1992, a then 20-year-old Yadav began her ascent to Mount Everest and successfully completed it from the difficult Kangshung Pass, making her the youngest to do so.

It was during this climb that she also displayed immense courage and perseverance. She tried saving the lives of two mountaineers who had collapsed due to lack of oxygen. While she was unsuccessful in saving one, the other climber, Mohan Singh was revived because Yadav shared her oxygen with him. 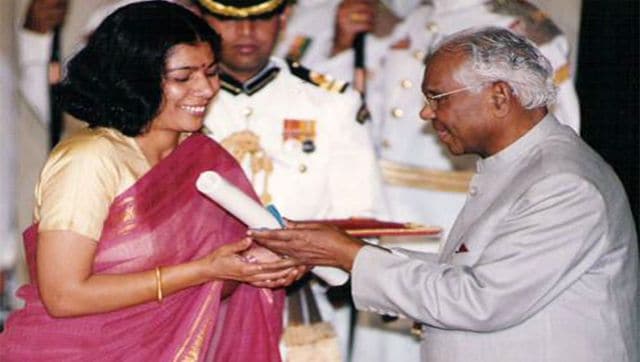 In 2000, the government honoured Santosh Yadav's contribution to mountaineering with a Padma Shri. Image Courtesy:
https://santoshyadavmountaineer.com/

Her obsession with the peak continued and in 1993, she climbed it again, this time with an Indo-Nepalese team.

In March of 2000, she was also awarded the Padma Shri for her achievements.

The Haryana government in 2006 also named a very busy road after her in Gurugram to honour her rare achievement.

Santosh Yadav’s invitation as the chief guest for the Vijayadashmi event will put her in the same club as former President Pranab Mukherjee and Nobel Peace Prize winner Kailash Satyarthi.

In June 2018, the RSS had invited former President Pranab Mukherjee for its Sangh Shiksha Varg, an annual training camp meant for recruits in their third year in the organisation. It is one of the two most important annual RSS events, the other being Vijayadashami Utsav or foundation day.

Mukherjee’s acceptance saw his own party, the Congress, launch a full-scale attack on him. In the same year, the RSS invited Nobel laureate Kailash Satyarthi as their chief guest for their Dussehra event. Speaking at the event, Satyarthi had said that the RSS shakhas could serve as a firewall to protect children, especially girls.

He had said that women in the country were grappling with fear, threat and insecurity at home and the workplace and that this was a “grave disrespect towards Bharat Mata”.

As per a report in The Indian Express, the RSS has been known to invite people not ascribing to its ideology. One of the earliest examples was former Central Provinces Home Minister Sir Moropant Joshi in the pre-Independence era during Hedgewar’s time.

As the victory in the Battle of Saraighat in 1671 had a far-reaching impact on the northeastern region and beyond, similarly, the defeat of the Mughals signalled the beginning of the downfall of the Mughal sultanate in India