Kolkata: The flood situation in West Bengal improved further on Sunday as water has started to recede in majority of the rivers in the worst-hit Howrah, Hooghly and West Midnapore districts.

The toll, however, rose to 34 since 21 July following the death of three more persons in the state, officials said.

A senior official in the state's Disaster Management Department said that nearly 25 lakh people were affected at about 170 villages in 11 flood-hit districts. 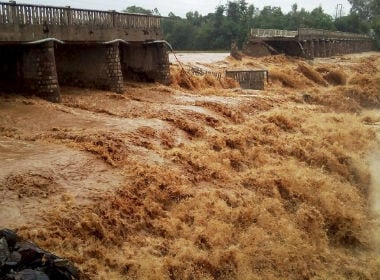 The flood was mainly caused by heavy rains earlier on Monday, triggered by a huge low pressure trough, and water released by the Damodar Valley Corporation (DVC) through its dams along the course of the Damodar river in Bihar and Bengal.

Nearly 68,000 people have taken shelter in 221 relief camps set up in the flood-hit districts, he said, adding that the past few days, the upper catchment areas have received little rainfall.

West Bengal Irrigation minister, Rajib Banerjee, told PTI that water had started receding in majority of the rivers in the worst-hit Howrah, Hooghly and West Midnapore districts. "The total release of water by the entire DVC system was 50,000 cusecs today. There is no report of any fresh inundation," he said, adding that steps had been taken to distribute relief materials in the flood-hit areas.

However, Banerjee struck a note of caution, saying that the situation might worsen anytime if it rained again and more water was consequently released by the DVC system.

"Many people have been rescued from affected areas like Ghatal in West Midnapore district, Pursura, Arambagh and Khanakool in Hooghly district and Amta and Udainarayanpur in Howrah district," he said.

The state government is yet to estimate loss incurred by farmers as over 2.5 lakh hectares of agricultural land lies submerged.