Ahmedabad: Victims of Una Dalit flogging incident on Monday sought arrest of the "mastermind" behind it and also demanded employment and more compensation. Balubhai Sarvaiya, whose two sons and two nephews were thrashed by cow vigilantes at Una town on 11 July, also expressed their dissatisfaction over the probe conducted by the CID-crime. 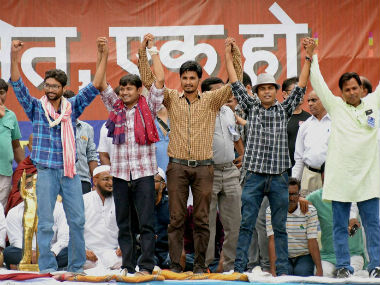 Members of Dalit community stand in solidarity to protest against the Una incident. PTI

"Till now, CID-crime has arrested 43 accused. I believe those arrested are only pawns. We want police to arrest the mastermind who hired these goons. We are also not satisfied with the charge sheet filed by the CID," he said at a press conference at Una in Gir-Somnath district.

On 11 July, seven Dalits of Mota Samadhiyala village in Una tehsil were allegedly thrashed by cow vigilantes when they were skinning a dead cow. Four of the Dalit youths were then taken to Una town and flogged in public. Balubhai was also injured in the attack.

He said the state did not give enough compensation as promised. "We have not received any financial help other than Rs 1 lakh which is mandatory under SC/ST (Prevention of Atrocities) Act. We also want the government to provide employment to the victims and their family members, as we are living in miserable condition after the attack."

He also dismissed the reports that victims would take part in an RSS rally in Uttar Pradesh ahead of Assembly polls there. "We never said anything like that. How can we support an organisation like RSS which encourages so-called cow vigilantes to attack Dalits in the name of cow protection? Be it BJP or Congress, we will neither join any party nor extend support to such parties during elections," he said.