Bahraich: Uttar Pradesh BJP chief Laxmi Kant Bajpai on Sunday sought to drag the Taj Mahal into yet another row claiming it was part of an ancient temple.

Bajpai said that Mughal emperor Shah Jahan “purchased a part of Tejo Mahalaya temple’s land from Raja Jai Singh” and claimed that he had documents to prove it still exist. 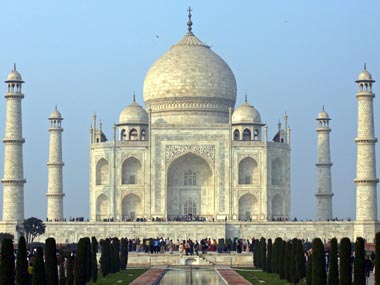 Tourists stand in front of the historic Taj Mahal in Agra.

On November 13, Samajwadi Party leader Azam Khan had said that the famed mausoleum should be declared a property of the state’s Waqf Board.

Khan, during a convention of ‘mutawallis’ (caretakers) asked chairman of State Sunni Central Waqf Board to make Taj Mahal a property of the board and appoint him as ‘mutwalli’.

Referring to the incident, Bajpai alleged, “Azam Khan has usurped property of Waqf and was now eyeing the world heritage Taj Mahal.” “Azam’s dream to offer namaz five times at Taj will never be fulfilled,” he said.

All India Shia Personal Law Board spokesperson, Maulana Yasoob Abbas, said, “As far as Mumtaz Mahal is concerned, she was a Shia, but Taj Mahal is heritage of the country and it should not be handed over to Sunni or Shia boards.” “ If the issue of handing Taj Mahal to the Waqf board is raised then Shia and Sunni will come face to face, therefore it should be kept away from the tussle,” he added.