New Delhi: Sri Lankan President Mahinda Rajapaksa arrived here last night for a three-day official visit during which he is to meet Prime Minister Manmohan Singh and also visit Sanchi in Madhya Pradesh, even as Tamil Nadu parties protested against his visit.

Rajapaksa is to attend a dinner hosted by Manmohan Singh Thursday evening at 7, Race Course Road. During the meeting, India is expected to air its concerns over issues related to the rehabilitation of war-displaced Tamils in Sri Lanka and also press for a long-term inclusive solution to the ethnic issue in Sri Lanka, said informed sources. 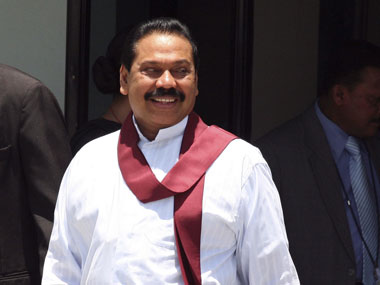 He is also to meet President Pranab Mukherjee Thursday.

The Sri Lankan president is to visit the Sanchi stupa on Friday and also lay the foundation stone of the University of Buddhist and Indic Studies in Sanchi.

MDMK general secretary Vaiko, who arrived in Nagpur with over 1,000 party supporters on way to Sanchi, Wednesday attacked the central government and the BJP-led Madhya Pradesh government for inviting Rajapaksa to Sanchi.

"Despite knowing that Rajapaksa is solely responsible for the genocide of innocent Tamils in Sri Lanka, the Shivraj Singh Chouhan government in Madhya Pradesh has invited him and the Centre endorsed his visit," Vaiko said.

Vaiko and MDMK workers are planning to stage a protest in Sanchi against Rajapaksa over alleged atrocities on Tamils in Sri Lanka.