The news of 11 Army personnel, including a JCO, having buried in an avalanche in Siachen glacier has been tragic. The Prime Minister has expressed grief on their sacrifice and the whole nation salutes these braves with hearts going out to their next of kin in this hour of sorrow. No compensation is enough.

Siachen is the highest battlefield of the world. The conditions are so daunting that the tenure of troops in northern, central and southern glacier are three months, six months and one respectively in descending order. Some coincidence that according to a media report of today, the 7th CPC has recommended risk allowance for troops serving in Siachen to be Rs 31,500 per month while a civil servant serving in Shillong, Guwahati or Leh has been recommended to get a risk allowance of over Rs 54,000 per month - talk of discrimination against the military! But wait, the all bureaucrat review committee appointed by the government may recommend an even higher allowance for the civil servants.

After all such occurrences, debates get going about avoidable casualties, excessive expenditure, so on and so forth. But what about the casualties on account of vagaries of weather; it is not the Siachen area alone that suffers avalanches. Avalanches have been occurring periodically elsewhere in Jammu and Kashmir, particularly in the Kargil Sector and along the LoC in the Kashmir Valley. Some time back entire crew of a gun position was buried in an avalanche in Dras area of Kargil. Doesn't mean we should vacate our borders. Again, fiscal expenditure cannot be viewed in isolation and certainly cannot be weighed against national security.

Siachen is a flowing frozen body of water. India is holding the dominating Saltoro Range lying west of Siachen, in its entirety less one small post that Pakistan has in the Central Glacier, which she retained by backtracking on the physical agreement by both parties to vacate during initial years of occupation of Saltoro Range. 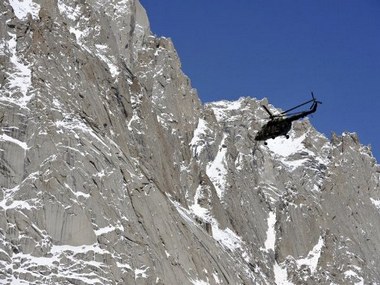 The fact today is that no Pakistani soul or bird is anywhere close to Siachen Glacier. More importantly, Pakistan herself wanted to occupy the Saltoro Range because of its strategic importance but was preempted by India in 1987, as admitted by Musharraf in his autobiography 'In the Line of Fire'. Jahan Dad Khan, commanding Pakistan's 10 Corps in 1983-84, writes in his book 'Pakistan Leadership Challenges' that an SSG Company was sent to Bilafond La in summer of 1983 but had to fall back as they were not equipped for winter. In 1984, when India pre-empted the Pakistani Army planned move, Dad Khan writes, "This was a great setback for Pakistan. We had obviously failed to appreciate the timing of the Indian move and our intelligence agencies had failed to detect the brigade size force in the area in April 1984."

The Cease Fire Line (CFL) drawn under 1949 Karachi Agreement under aegis UN ran up to NJ 9842 in Ladakh, beyond which it only said "thence North to the Glaciers". NJ 9842 has never been occupied by any side. Pakistan now draws a straight line in a northeasterly direction from NJ 9842 up to the Karakoram Pass on its perceived boundary with China. If a CFL was to be drawn north from NJ 9842, it should have run north to Dafdar in Taghdumbash Pamir near Beyik Pass (bordering Wakhan Corridor), the northwestern extremity of undivided State of Jammu and Kashmir that was legally ceded to India. Saltoro Range is the wedge between Indian and Pakistani positions in the area, with India atop the Saltoro and Pakistani positions on much lower ground to the west. Its strategic importance is much greater now with the Chinese not only occupying the Shaksgam Valley (illegally ceded by Pakistan to China in 1963) but PLA having entered the Gilgit-Baltistan (GB) region in connivance Pakistan, plus aggressive Chinese incursions and claims in Eastern Ladakh. Besides, the northern slopes of the Indra Col (northern tip of Saltoro Range) lead to the Shaksgam valley.

Additionally, the value of Siachen as a fresh water source cannot be ignored. Much before becoming Army Chief, Musharraf gave a presentation to Pakistani Defence Ministry that the per capita availability of water in Pakistan from 6000 cusecs of water in 1947 had already come down to 1000 cusecs per capita and this was reason enough for Pakistan to annex J&K. Consequently, Pakistan started claiming the LC from NJ9842 directly to Karakoram Pass so that entire Siachen Glacier becomes Pakistani territory.

There have been reports in the media that in 1992, an agreement had been reached for mutual withdrawal from Siachen but the fact is that this was just the individual view of Narasimha Rao, then PM and Foreign Minister without reference to even MEA, leave aside the MoD or military. During the regime of UPA-II also vested international mediation through Track II diplomacy was at play to recommend Indian withdrawal from Siachen. In fact, Sanjay Baru in his book 'The Accidental Prime Minister' says that then PM Manmohan Singh too wanted this.

Was Manmohan Singh eyeing a Noble Peace Prize for himself despite the strategic disadvantage that India would suffer? The fact remains that the situation on ground has changed drastically from yesteryears, as discussed above, because of Chinese activities in PoK and eastern Ladakh. Any withdrawal from Siachen will seriously threaten defence of Ladakh. Such withdrawal would imply gifting away Sub Sector North (east of Siachen Glacier) to China, as positions there will become untenable. With the next defence line south of the Shyok River, not only will India require deployment of minimum two Divisions (instead of the one Brigade on the Saltoro Ridge) at mammoth expenditure that it can ill afford, Leh will come within enemy artillery range. China, through Aksai Chin will link up with Pakistan in GB area, enlarging the collusive China-Pakistan threat further.

What also needs to be noted is the prime occupation of Pakistani Military in spawning terrorism. Withdrawal from Siachen area will open avenues of infiltration and terrorism into Ladakh. Since late 1990s, Pakistan's ISI has been nurturing Shia terrorist organizations including Tehreek-e-Jaferia (TJP) and its many sub groups with an eye on Ladakh and Zanskar Range south of it. Infiltration into Ladakh and initiation of terrorism will have reverberations through the Zanskar Range right down to Kulu-Manali in Himachal Pradesh, requiring deployment of perhaps another two Corps to control the area. Siachen Glacier also happens to be one of the largest fresh water reserves of India which is vital for our precarious water situation.

But finally where does the question of discussion on Siachen come in at all when whole of Jammu and Kashmir is Indian Territory. Lack of strategic forethought and political unilateralism has been typical to India ever since Independence. More significantly, ambiguity and deceit have been the hallmarks of China and Pakistan.

Ask yourself have they ever bothered about world opinion? Has Pakistan despite the little Obama-Carry cajoling made even a wee attempt to dismantle the terrorist infrastructure in PoK? On the contrary, hasn't the rabid mullah Hafiz Saeed been given free run despite being branded international terrorist? In 1984, when both India and Pakistan rushed for Gyong La in Central glacier, an agreement was reached following a flag meeting for both parties to withdraw. Indians did, but the Pakistanis re-enacted their back-stabbing legacy and occupied the pass in clear violation of the agreement made hours ago. Pakistan is at great strategic disadvantage in Siachen area and this equation must not change. Yes, the avalanche incident has been tragic and yet may recur in future too. The citizens can be rest assured, the soldiers will remain steadfast.