There has been a slight decline in the number of train accidents after implementation of a series of safety measures, including use of modern technology, according to Railway Ministry data. 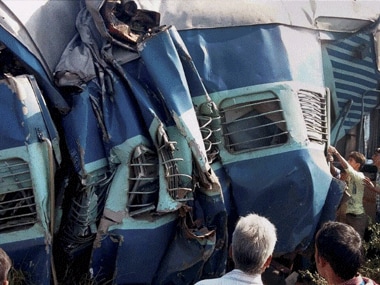 This year, train accidents decreased from 29 to 15 during April-June in comparison to the corresponding period of 2016, an improvement of 48.3 per cent.

"There is a focus on accident prevention measures with safety getting top billing. Railway Minister Suresh Prabhu had launched 'mission zero accident' in the Rail Budget 2016-17 for carrying out a special drive to curb mishaps," said a senior Railway Ministry official.
Safety measures, including speedy track renewal, ultrasonic rail detection system and elimination of many unmanned level crossings on priority basis, have been undertaken to prevent rail accidents.
The 2016-17 fiscal saw elimination of 1,503 unmanned level crossings and 484 manned level crossings by construction of road over-bridge and under-bridge, a record so far, the official said.
Since unmanned level crossings are responsible for maximum number of train accidents, the railways intends to eliminate all such crossings on broad gauge section by 2020. Rashtriya Rail Sanraksha Kosh, a special safety fund, was created in the Budget 2017-18 with a corpus of Rs 1 lakh crore over a period of five years for financing critical safety- related works.

The railways has also inducted LHB coaches replacing conventional ones in a phase-wise manner resulting in reducing the chances of derailment and mitigating the possibility of grievous injury or death in case of accidents, the official said.
LHB coaches have anti-climbing features and provision of superior braking and lesser chances of uncoupling of coaches in case of accidents.
Besides, the railways has speeded up the use of modern technology such as ultrasonic system to detect defect on tracks, train protection warning system (TPWS) and train collision avoidance system (TCAS) to prevent accidents, the official said.
While the TPWS has been installed on 342-km route, the TCAS is being tried on 350-km route.
Good track condition is crucial for safe running of trains and so track renewal has been undertaken on a priority basis and adequate fund has been allocated for this, said the official.
The allocation for track renewal has been almost doubled from the last five years average of Rs 5,548.6 crore to Rs 9,961 crore in the Budget Estimate of 2017-18.