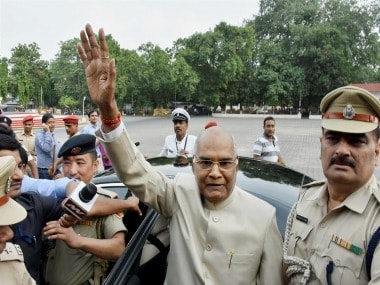 Kovind is expected to win the presidential race given that the BJP and its allies have a majority in electoral college comprising Members of Parliament and members of legislative assemblies and councils of all states.

A formal announcement of the winner is expected by 5 pm.

The voting took place on Monday.

Counting began at 11 am with the ballot box of Parliament House being opened first, followed by ballot boxes received from states in alphabetical order.

The votes are being counted on four separate tables and there will be eight rounds of counting.

Thirty two polling stations, including the one in Parliament House, were set up in various states.

A total of 4,896 voters – 4,120 MLAs and 776 elected MPs – were eligible to cast their ballot. MLCs of states with legislative council are not part of the electoral college.

The numbers are stacked in favour of the ruling coalition's nominee Kovind, a former Bihar governor, over the Opposition's candidate and former Lok Sabha Speaker Kumar.