The Gandhinagar-Mumbai Vande Bharat Express is the third in the series. Image Courtesy: Ministry of Railways

Prime Minister Narendra Modi, who is in his home state of Gujarat, has flagged off the Gandhinagar-Mumbai Central Vande Bharat Express — the third in the series, the other two being run between New Delhi-Varanasi and New Delhi-Shri Mata Vaishno Devi Katra.

The high speed train service is Prime Minister Narendra Modi’s dream project. He had talked about connecting 75 cities with the Vande Bharat train on 15 August 2021. Since then, railway officials have been working tirelessly to get the plan on track. The Railways is ready to implement this project by 15 August 2023.

Today’s Vande Bharat 2.0 is special as the train has received certain upgrades over its previous two predecessors. Explaining the same, Railway Minister Ashwini Vaishnaw said that just like smartphones, the Vande Bharat 2.0 comes with upgrades.

Here’s what we know about the flagged-off train and all that makes it special.

What’s changed in the Vande Bharat 2.0?

The high-speed train is made by Integral Coach Factory (ICF), Chennai, a Railways Production unit.

The Vande Bharat 2.0 can operate at 160 kmph, around 16 seconds faster than its predecessor. In fact, during its trial, the train also broke the record of the bullet train. It reached the speed from 0-100 kmph in 52 seconds as compared to the earlier version which attained the same speed in 54.6 seconds. The train will cover the distance from of 491 km from Ahmedabad to Mumbai in about five hours.

The weight of the train has been reduced by 38 tonnes to 392 tonnes and it can continue functioning even with two feet of flood waters on the tracks. These are made of stainless steel. Due to less weight, the passengers would feel extra comfortable even at high speed.

Inside the train, there are reclining seats in all classes while the Executive Coaches have the added feature of 180-degree rotating seats. There are Divyang-friendly washrooms and to make the train more accessible, the seat handle with seat numbers will also be provided in Braille.

The Railways have also claimed that passengers inside the train will be inhaling air which is 99 per cent free of germs — something the earlier trainsets didn’t have.

The train also provides WiFi and on-demand content and the LCD displays in each coach is now 32 inches, up from the 24-inch screen. 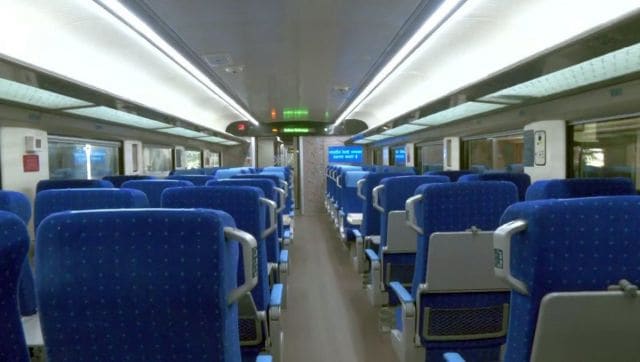 Also, this train has been provided with four platform side cameras outside the coach, including rearview cameras.

The Vande Bharat 2.0 has been designed to increase Indian Railways' Green footprint by dispensing with the power cars and saving about 30 per cent of electricity with the advanced regenerative braking system.

What’s on the menu

Passengers aboard this train will be treated to a health conscious low calorie millet rich, regional menu.

As per a statement by the Railways, the catering arm Indian Railway Catering and Tourism Corporation (IRCTC) shall deliver rich cuisine experience to travellers’ taste buds during the journey both on the inaugural day as well as regular runs.

The train is all set to serve high-end delicacies suited to the taste-buds of clientele. Cuisine with a patronisation to Gujarat and Maharashtra will reflect in the menu, although it shall also address passenger expectations from other parts of the country.

Malt beverages for children are being introduced for the first time as a service in the premium train. The usual chocolate bar will be replaced with “Peanut Chikki” with peanuts sourced from local farmers in the “Be Vocal, Go Local ideology,” said the Railways.

When can I travel on the new train?

The new train will begin for passengers from 1 October and will run six days a week between Mumbai Central and Gandhinagar stations, barring Sundays.