A security personnel keeps vigil outside the Popular Front of India (PFI) party office in Navi Mumbai on Thursday. PTI

The controversial Popular Front of India (PFI) is under the scanner of law enforcement agencies once again. In its “largest-ever investigation process till date” the National Investigation Agency (NIA) and the Enforcement Directorate (ED) on Thursday conducted searches at PFI offices and houses of its leaders across 10 states over alleged involvement in terror activities. They also detained 100 people linked to the organisation.

The searches are part of a crackdown against those allegedly involved in terror funding, organising training camps, and radicalising people to join proscribed organisations, reports news agency PTI.

Also read: Is the PFI a gateway to Islamic State and other terror outfits?

The PFI was created in 2007, through the merger of three Muslim organisations in south India – the National Democratic Front in Kerala, the Karnataka Forum for Dignity, and the Manitha Neethi Pasarai in Tamil. The organisation emerged after the ban on the Students Islamic Movement of India, and in 2012, the Kerala government told the High Court that the PFI was “nothing but a resurrection” of SIMI.

The outfit claims to work for the rights of minorities, Dalits, and marginalised communities but has gained notoriety over the years having been accused of terror, murder, and inciting communal tensions.

We take a look at its history sheet and frequent run-ins with the law.

A professor’s hand chopped off

The PFI first rose to national infamy after it attacked a professor in Kerala on 4 July 2010. It was a question in an exam paper that angered the members of the Muslim outfit.

A former Malayalam professor at Newmans College in Thodupuzha, TJ Joseph’s right hand was severed at the palm by a few PFI activists for a question that he gave students during an exam. He was accused of making blasphemous remarks against Prophet Mohammed in the question.

Eventually, Joseph lost his job, his wife killed herself and his family faced ostracisation.

In Kerala, the PFI has been accused of having links with terror organisations like the Islamic State. The case, known as the Valapattanam IS recruitment case, was registered by the Kerala police in 2017 after two of those convicted were arrested in Turkey and subsequently deported to India for trying to sneak into Syria to join IS. The convicted persons were part of the Kannur module of the IS, according to the police. The PFI has been accused of trying to make recruitments for the Islamic State. AFP

According to intelligence agencies, some 40 to 50 PFI activists from the Kannur district, mainly from the Valapattanam region, joined the IS in Syria.

In July, an NIA court in Kochi handed over a prison sentence to three men who were convicted in a case about recruitment to the terrorist group.

The PFI has been accused of “love jihad”, a conspiracy theory that purports that Muslim men target Hindu women and convert them to Islam.

The National Commission of Women said that Hadiya, a young girl from Kerala, was forced to embrace Islam and marry a Muslim man. However, the girl born to Hindu parents as Akhila denied the allegations and the case went to court. According to the NIA, the PFI helped people involved in a relationship to convert to Islam. PTI

A Kerala High Court annulled her marriage but the Supreme Court in March 2018 set aside the earlier judgement and allowed Hadiya to live with her husband, Shefin Jahan.

A senior NIA official told Hindustan Times in October 2018 that while people and organisations associated with the PFI were “involved in helping either the man or the woman involved in a relationship to convert to Islam, we didn’t find any prosecutable evidence to bring formal charges against these persons”. The NIA did not find evidence of a larger criminal conspiracy.

On 11 August 2020, riots broke out the Karanataka’s Bengaluru. Violent clashes and large-scale rioting were reported at KG Halli Police Station. The violence was triggered after an inflammatory Facebook post on the Prophet by Naveen, the nephew of Congress MLA from Pulakeshi Nagar, Akhanda Srinivas Murthy.

In December of that year, the NIA arrested office-bearers, active members and sympathisers of the PFI and its political outfit the Social Democratic Party of India (SDPI). During the Bangalore riots, the PFI allegedly used social media to spread terror among people. PTI

Besides launching an attack on Kadugondana Halli police station, the accused were charged by the NIA for extensive use of social media channels such as Facebook, Instagram and WhatsApp “to spread terror among people”. They also mobilised people from faraway places to create panic and terror, the NIA stated.

Twenty-one alleged members of the outfit were also arrested for arson and violence during the anti-CAA protests in Mangaluru on 19 December 2019. A year later, the Supreme Court granted them bail. 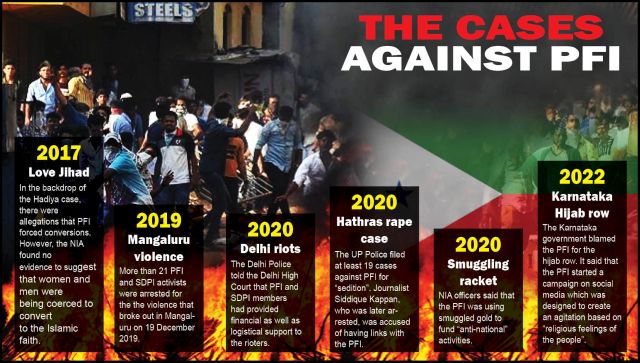 The PFI has been accused of many crimes, from its role in the anti-CAA riots to funding terror. Graphic: Pranay Bhardwaj

The 2020 riots in northeast Delhi saw large-scale bloodshed, violence, and destruction of property as Hindus and Muslims clashed. Fifty-three people were killed in the violence. A sit-in protest against CAA sparked the tension after BJP’s Kapil Mishra asked the police to clear the roads in a hate speech. The PFI was accused of funding the 2020 Delhi riots. PTI

The PFI was accused of instigating and funding the Delhi riots. PFI’s Delhi chief Parvez Ahmed and secretary Mohammad Iliyas were arrested in connection with the case.

In July 2020, as a gold smuggling racket was busted in Kerala, investigators probed possible links to the Muslim outfit.

The smuggled gold may have been used by the PFI to fund “anti-national” terror activities, some intelligence sources said. The NIA and ED were also probing the possibility that the money was used to finance the anti-CAA protests.

Hathras and links to Siddique Kappan

The Uttar Pradesh Police arrested Kerala-based journalist Siddique Kappan and three others in October 2020 while they were on their way to Hathras to meet the family of a Dalit woman who died after allegedly being gang-raped. According to the police, Kappan is a PFI think tank member and even “advised” one of two PFI “hit squad” members arrested with explosives in Lucknow in February 2021, reports The Indian Express.

After spending nearly two years in jail, the Supreme Court granted bail to Kappan on 9 September. During the ruling, Chief Justice UU Lalit said, “At best you can say this man (Kappan) was travelling in a car, and he was apprehended with three others, there was some literature in the car, the other three are linked with PFI?”

The hijab row came to the fore on 1 January at Government PU College in Udupi after six students claimed that they were not allowed to enter classrooms wearing headscarves. This snowballed into widespread protests which spread to other parts of the country.

Muskan, the student who was heckled by a group of Hindu boys, and became a face of the protest, was allegedly linked to the radical group, according to some media reports. 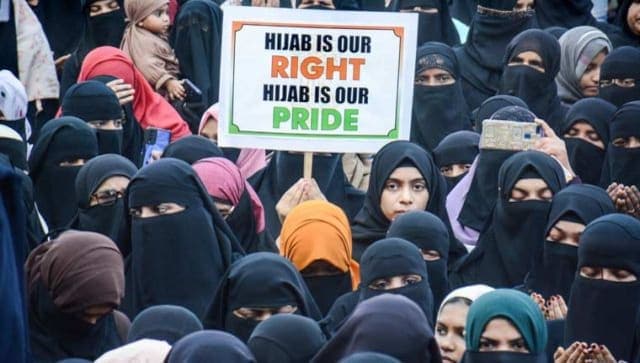 The Karnataka High Court upheld the ban that restricted students from wearing the hijab in classrooms in March. PTI

The case is now being heard in the Supreme Court, and the Karnataka government has said that the PFI goaded students into wearing hijab to school.

Solicitor General Tushar Mehta, appearing for Karnataka, told the court the PFI started a campaign on social media which was designed to create an agitation based on “religious feelings of the people”. “This is not a spontaneous act of a few individual children that we want to wear a hijab. They were a part of a larger conspiracy and the children were acting as advised,” Mehta told the bench.

In July, the Bihar Police arrested three men allegedly linked to the PFI for being part of a “potential terror module” that sought to target those “who make adverse and objectionable” comments against Islam.

The accused Athar Parvez, allegedly a former member of SIMI; Mohammed Jalaluddin, a retired sub-inspector of the Jharkhand Police; and Arman Malik were arrested from the Phulwari Sharif area in Patna. They allegedly held meetings at mosques and madrasas and worked towards what is called radicalisation.

The home ministry has handed over the case to the NIA.

The BJP has often accused the PFI of being responsible for the murder of Hindutva activists. Earlier this week, a PFI leader from Palakkad in Kerala was arrested in connection with the killing of an RSS leader in the district in April, the police said. In 2016, the PFI’s Bengaluru district president was arrested in connection with the murder of RSS leader R Rudresh.