Pakistan 'terror' boat: Did the Coast Guard get it horribly wrong?

Amid the storm of back patting and loud media congratulatory messages regarding the Coast Guards claims that it intercepted a Pakistani fishing vessel filled with explosives that blew itself up off the Gujarat coast, reports are now emerging that the boat in question may not have posed a terror threat to India after all.

An official statement by the Ministry of Defence on the incident, reads as follows:

As per intelligence inputs received on December 31, a fishing boat from Keti Bunder near Karachi was planning some "illicit transaction" in the Arabian Sea. A Coast Guard ship warned the fishing boat to stop for further investigation. However, the boat increased speed and tried to escape from the Indian side. 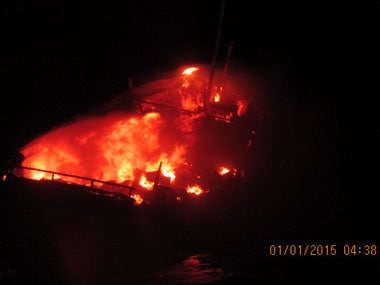 Image from Ministry of Defence

"The hot pursuit continued for nearly one hour and the Coast Guard ship managed to stop the fishing boat after firing warning shots. Four persons were seen aboard the boat and they disregarded all warnings by the Coast Guard. Soon thereafter, the crew hid themselves in the deck below and set the boat afire, which resulted in an explosion and a major fire on the boat."

Due to darkness, bad weather and strong winds, the boat and persons on board could not be saved or recovered.

However new reports indicate that there was little to suggest that the vessel in question really posed a threat, and says that the Coast Guard may have used disproportionate force in the incident. Doubts are also being raised on the MoD's version of events, such as the location in which the incident is said to have taken place, the way intelligence reports about the vessel were interpreted, as well as details of the pursuit.

Writing for the Indian Express, Praveen Swami claims that "Highly-placed government sources, said the intelligence had no link to terrorism, and made no reference to any threat to India. Instead, the sources said, the National Technical Research Organisation had intercepted mobile phone traffic involving small-time smugglers operating out of the fishing port of Keti Bandar, near Karachi.

The report adds that the Maharashtra unit of the Coast Guard never got a message on 31 December that a maritime operation of this nature was underway, which was surprising, given that the "the state has several landing points and jetties that could be used by a boat carrying explosives to India’s western seaboard."

Then there is the question of where the boat was when the Coast Guard sought to chase it down.

According to this DNA report, "Even senior intelligence agencies are wondering why the Coast Guard chased the boat when it was on the fringe of India's exclusive economic zone (EEZ). The EEZ extends up to 200 nautical miles or 370 km. According to UN convention, a nation can chase or intercept suspicious vessels if they prohibit the host nation's passage or if they (suspicious vessels) loiter above or under the surface of the sea. That was not the case here" There is also the matter that Indian fishermen are claiming that they never saw a fire.

The Indian Express report points to several other potentially damning factors: Apparently the weather on 31 December was not 'bad', as claimed by the media release, and there is little clarity on as to why such excessive force was used.

The Ministry of Defence has however stood by its version of events, with some sources telling Times Now, that they had 'definitely' foiled a terror attack on Indian soil.