Jammu: Pakistan army on Tuesday violated the ceasefire by targeting Indian Army positions with mortar and small arms fire in Noushera sector of Rajouri district, prompting the army to give a "befitting response". 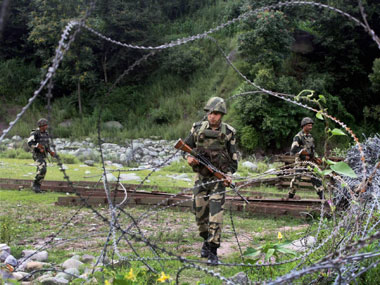 "From 10 am, Pakistan army resorted to unprovoked ceasefire violation in Noushera sector of Rajouri district by targeting our positions with mortar bombs and small arms fire", an army officer said. He said the army was giving a "befitting response" to the ceasefire violation from the Pakistani side.

"The army is giving a befitting response to the Pakistani army," the officer said.

There was no report of any loss of life or the property on the Indian side as the firing from both the sides was still going on.

A 6-year-old boy and a BSF Jawan were killed and 10 people including eight civilians were injured in the shelling on Monday when Pakistan rangers targeted over 25 border outposts in the border hamlets along International Border.

There have been over 40 ceasefire violations from the Pakistani side since the Indian side carried out surgical strikes inside Pakistan occupied Kashmir targeting terror launching pads, post the attack on an army camp in Uri on 18 September.