Nagrota attack as it happened: Four militants killed as operation comes to end after eight hours

Intense firing continues even after six hours, as unidentified number of militants attacked an army camp in Nagrota in Jammu and Kashmir on Tuesday morning

It is Pakistan's desperation but it won't succeed as India is not a weak country to be affected by it: Nirmal Singh J&K Dy CM on #Nagrota pic.twitter.com/yxux3LWuwj

Nagrota attack is finally over after eight hours of operation

According to CNN-News18, the security forces have killed four militants who attacked the Nagotra army camp on Tuesday morning. Combing operations in progress, which is likely to take another four hours.

Security forces are also proceeding slowly considering one of the terrorists killed by BSF during an infiltration bid in Samba district on Tuesday came laced with a bomb. 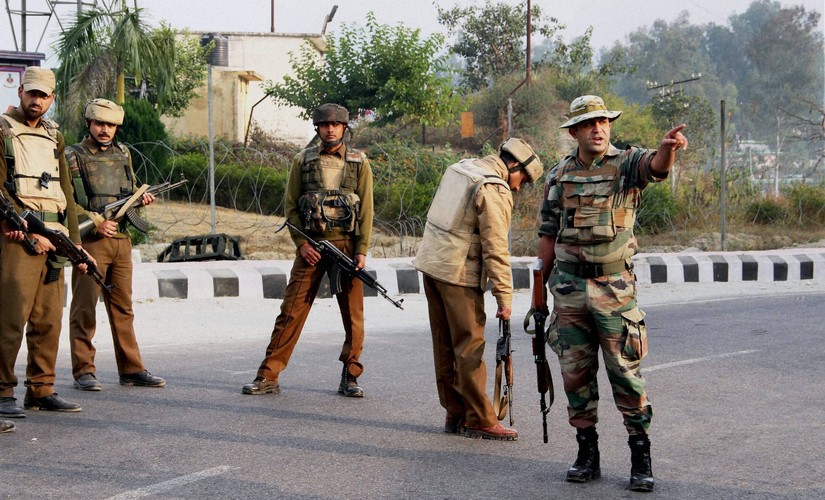 Does Nagrota attack show demonetisation is not working?

Three jawans have been killed in the Nagrota attack that begun Tuesday morning. An army major and three soldiers were also injured. According to security forces, one militant has been killed so far.

Just the other day, a top officer rued the fact that the Centre still does not seem to realise the seriousness of the challenge in Jammu and Kashmir. We are already in the middle of another proxy war. The 'surgical strikes' did absolutely nothing to halt Pakistan’s unfolding war plans.

As security forces continue to exchange fire with terrorists holed up inside officers' quarters in Nagrota, latest reports have revealed that two more Border Security Forces are injured in the fire exchange with militants who tried to infiltrate the border on Tuesday morning.

Jammu: Militants attacked an army camp in Nagrota in Jammu and Kashmir on Tuesday morning, officials said. The attack reportedly started around 5.30 am with militants firing at a field regiment camp located in the garrison town of Nagrota near the headquarter's of Indian Army's 16 Corps in the state.

At least, two-three suicide attackers are believed to be holed up in the area as a heavy exchange of fire is going on between the militants and security forces. However, their exact number is still not confirmed. The ongoing firing has killed two jawans and injured two others, one of them being a junior commissioned officer.

CNN-News18 reported that the Indian security forces killed one terrorist later in the morning. According to the TV news channel, the militants entered the area dressed in army clothes.

According to CNN-News18, the militants are currently holed up inside the officer's mess near the camp.

The camp is situated close to the headquarters of the Indian Army's 16 Corps — a massive military formation that acts as a nerve centre to fight militancy and defend the borders in the Jammu region.

This is the seventh terror attack in the last seven days. "The encounter is currently in progress, however, the number of militants is still not confirmed. We will able to give more details only once the operation is over," Defence PRO, Manish Mehta told the news channel.

The security forces have cordoned off the area and ordered to shut down all schools Nagrota tehsil as a precautionary measure.  "We have ordered the closure of all schools and education institutions in Nagrota tehsil in view of the terror attack", Deputy Commissioner, Jammu, Simrandeep Singh said.

"We have ordered the closure of all schools and education institutions in Nagrota tehsil in view of the terror attack", Deputy Commissioner, Jammu, Simrandeep Singh said.

In view of the attack, the Jammu-Srinagar National Highway has been closed for traffic in the area, PTI said.

An alert has been sounded in Jammu city as well.

The attack came around the same time when an infiltration bid was undergoing near the Chambliyal Border Outpost in Samba district of Jammu and Kashmir.