Muslim organisation or terror outfit? What is the PFI and how has it grown in India?

Founded in 2007, the Popular Front of India (PFI) finds itself embroiled in various criminal cases related to terror, murder, and inciting communal violence. However, the organisation states that its aim is to empower the deprived and marginalised Muslims and Dalits. What is its truth?

There have long been calls to ban the Popular Front of India for their alleged involvement in terror activities. AFP

The Popular Front of India (PFI) is back in the news.

On Thursday morning, nearly 100 activists belonging to the collective were arrested or detained by multi-agencies led by the National Investigation Agency (NIA) in around 10 states for allegedly supporting terror activities in the country.

As per officials, the raids took place in Kerala, Tamil Nadu, Karnataka, Andhra Pradesh, Telangana, Bihar, Uttar Pradesh, Rajasthan and the national capital. The officials said the searches are taking place at the premises of persons involved in terror funding, organising training camps, and radicalising people to join proscribed organisations.

In reaction to the “largest ever” crackdown till date, the PFI said in a statement, “The raids are taking place at the homes of national, state and local leaders of PFI. The state committee office is also being raided. We strongly protest the fascist regime’s move to use agencies to silence dissenting voices.”

We examine exactly how the PFI came up, its growth, and why is it seen to be a controversial organisation with extremist leanings?

What is the PFI?

The Popular Front of India (PFI) describes itself as an organisation that works towards “the achievement of socio-economic, cultural and political empowerment of the deprived and the downtrodden and the nation at large”.

Registered at Delhi under the Societies Registration Act XXI of 1860, its purpose is to establish a classless society which revolves around freedom, justice, and security.

The PFI calls itself a neo-social movement committed to empower people belonging to the minority communities, Dalits and other weaker sections of the society. In Kerala, a retired professor P Koya is considered as the tallest leader of the organisation.

The PFI has its own newspaper in Malayalam called Thejas. Its print edition ceased in 2018 though it continued as a magazine and online.

The origins of PFI

The roots of the PFI can be traced to a state organisation that existed in Kerala in the 1990s, the National Development Front (NDF).

The NDF was set up in Kerala in 1994 – two years after the Babri Masjid demolition incident – to protect the interest of the Muslim community. As the NDF’s popularity surged in Kerala, so did allegations of communal activities. In 2003, some of its members were arrested for rioting and murdering eight Hindus in Marad Beach in Kerala’s Kozhikode.
In November 2006, at a meeting in Kozhikode, it was then decided that three Muslim organisations in southern India — the National Democratic Front in Kerala, the Karnataka Forum for Dignity, and the Manitha Neethi Pasarai in Tamil Nadu — would merge into one unit. 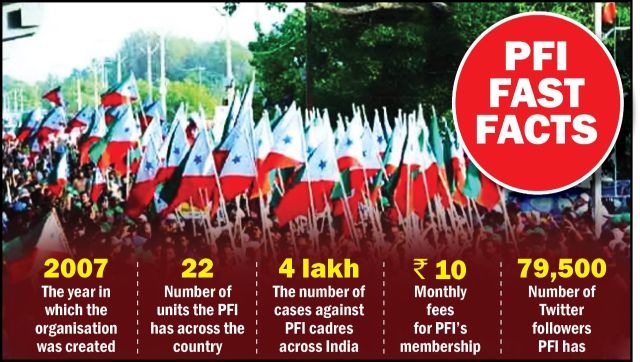 PFI and links to SIMI

Many, including investigating officials and political leaders, consider the PFI to be merely a rebranding of the now-banned terror group Students’ Islamic Movement of India (SIMI).

This is because several founder-members of the PFI were SIMI leaders, including former PFI chairman and now vice-chairman EM Abdul Rahiman (general secretary of SIMI between 1982 and 1993), Social Democratic Party of India president E Aboobacker (Kerala state president of SIMI from 1982 to 1984), and Professor P Koya, national executive member and one of the tallest leaders of the PFI, who was also a founding member of both SIMI and the NDF.

Harish Pandey, Deputy Commissioner of Police (DCP), Bengaluru South, speaking about SIMI and PFI, said to The Print, “The push to build a radical Islamic outfit seems to have gained momentum in the early 2000s. Such radicalised cadres left SIMI en masse after it was banned [in 2001] and went underground for some time, but re-emerged as PFI.

However, many PFI leaders reject this claim. In fact Professor P Koya told The Print that the NDF and SIMI were parallel organisations for 10 years before the latter was banned but their ideologies were different. “SIMI said Islam was the only solution to India’s problem but we hold that India is a pluralistic country with many religions. We never conformed to SIMI’s idea,” he claimed. 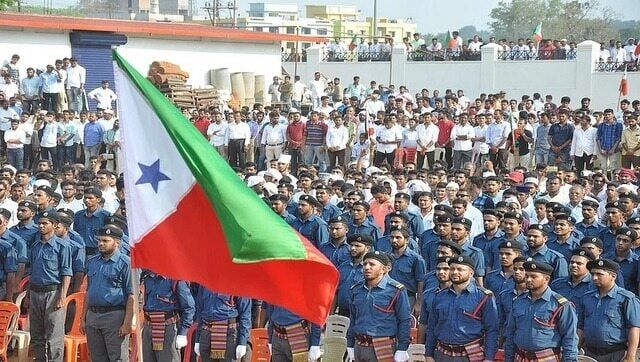 Many consider the PFI to be merely a rebranding of the now-banned terror group Students’ Islamic Movement of India (SIMI). PTI

Since its inception, the PFI has grown leaps and bounds, much to the wariness of security officials and intelligence agencies across the country.

It also shifted its headquarters from Kozhikode, Kerala to New Delhi.

In 2009, it launched its political arm – the SDPI – to fight “for the advancement and uniform development of all the citizenry, including Muslims, Dalits, Backward Classes and Adivasis.”

It was headed by E Abubacker who used to be the Kerala Zone president of SIMI between 1982 and 84.

That same year its student wing, the Campus Front of India (CFI), was also founded, which has been alleged of inciting the hijab row in Karnataka.

Today, the PFI claims to have units in 22 states, with a very strong presence in Kerala, Karnataka and Andhra Pradesh.

But, what makes the PFI so popular with the masses?

The leaders of the PFI credit its popularity to its relentless social programming and related programs. It says it has carried out several programs to “empower” Muslims and other marginalised sections.

The PFI has also been keen to provide legal assistance across India. The group deftly plays on existing grievances within Muslim communities, grievances that stem from significant socioeconomic and political marginalisation. Against this backdrop, the PFI presents itself as a protector of marginalised groups.

However, investigating agencies a pattern of criminal activity and illegal funding.

IB officials have been quoted as saying that PFI has been actively promoting jihad and classes on jihad are being conducted by some of its members.

“They preach to their cadre to attack the right-wing organisations in the country. The attacks are either communal or political. However, unlike the Indian Mujahedeen and LeT, they have not taken up any large-scale terror attacks against a general civilian target,” said an intelligence bureau officer to The Quint.

The PFI has, however, rejected all these claims, saying the media and the government just want to make them a scapegoat. “We don’t need any certificate from anyone. We strongly believe in Constitution of the country and its democracy. ‘Live with dignity and without fear’ is our motto. We are here to empower the Muslim community,” said state general secretary of C P Muhammad Basheer.