Muslim graduate who was denied job rejects 12 offers, says he wants to be selected on merit

Zeeshan Ali Khan, the 22-year-old MBA graduate who was denied a job by a diamond export company in Mumbai because of his religion, has turned down 12 other job offers he got. Zeeshan said he wanted to get a job on the basis of merit and not sympathy. 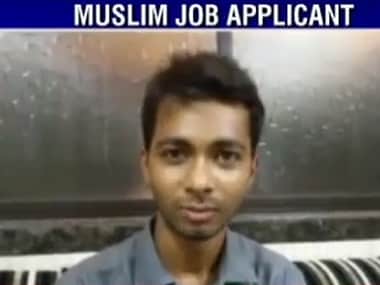 “Please don’t offer me jobs out of sympathy. Select me only if I am a deserving candidate, regardless of my religion, caste and creed,” Indian Express quoted Khan as saying.

Khan, who happens to be a "big fan" of Prime Minister Narendra Modi, also condemned the discrimination of non-Muslims on the basis of religion. "For that matter, why only Muslims, other religions too face discrimination. A company in Kerala had a policy of hiring only Muslim and Christian candidates. What about the Hindus of that area? Who will provide them with jobs? We, aspiring youngsters, are suffering due to communal conflicts. Imagine if the Gulf countries stopped hiring people from other religions, what disastrous consequences would globalisation face?" the report quoted him as saying.

The MBA graduate had applied for an opening in the company on 19 May. According to him, he had received a response within 15 minutes which had said they hired only non-Muslim candidates.

"Thanks for your application. We regret to inform you that we hire only non-Muslim candidates," the company had said in response to his application.

"I was looking for a job. I came to know about a recruitment drive taking place at Hare Krishna Exports Pvt LTD, one of the leading exports houses of the country. I thought it would be a wonderful opportunity to start my career with them."

Zeeshan added that within 15 minutes of him applying for the job, the company got back to him saying, "We only hire non-Muslim candidates." Zeeshan had told PTI, "I was quite shocked when I read about this, I took a screen shot of it and posted it on Facebook."