Jammu: Asserting that the Citizenship (Amendment) act (CAA) was implemented in Jammu and Kashmir the day it was passed by Parliament, Union minister Jitendra Singh on Friday said the government's next move would be regarding the deportation of Rohingya refugees as they will not be able to secure citizenship under the new law.

He demanded a probe into how the Rohingyas reached and settled down in the northern-most belt of Jammu after passing through several states from West Bengal.

"The CAA has been implemented in Jammu and Kashmir the day it was passed (by Parliament). There are no 'ifs' and 'buts', by the implementation (of the CAA in Jammu and Kashmir), what would happen here is that the next move would be in relation to (the deportation) of Rohingyas," Singh said at a function here.

The minister, who was addressing the officers of the Jammu and Kashmir government at a three-day training programme on the general fund rules here, pointed out that Jammu had a sizable population of Rohingyas. 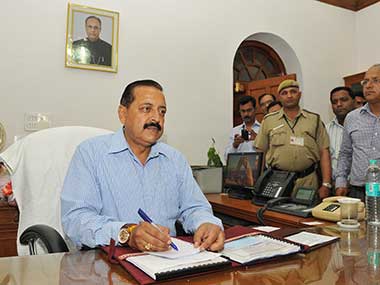 "What will be the plan of their (Rohingyas') deportation, the Centre is concerned about it. Lists would be prepared. Wherever needed, biometric identity cards will be given, because the CAA does not give leverage to Rohingyas," Singh said.

"They do not belong to the six (religious) minorities (who will be given citizenship under the new law). They do not belong to any of the three (neighbouring) countries (Pakistan, Bangladesh and Afghanistan)," he said, adding that the Rohingyas came to the country from Myanmar and hence, they would have to go back.

More than 13,700 foreigners, including Rohingya Muslims and Bangladeshi nationals, are settled in Jammu and Samba districts, where their population has increased by over 6,000 between 2008 and 2016, according to government data.

The CAA has triggered protests across the country after it was passed by Parliament on December 11.

The ruling Bharatiya Janata Party (BJP), the Jammu and Kashmir National Panthers Party (JKNPP), the Vishva Hindu Parishad (VHP), the Rashtriya Swayamsevak Sangh (RSS) and other social organisations have demanded repatriation of the Rohingyas in the past as well.

Singh demanded a probe into the circumstances that led the Rohingyas to travel such a long distance through several states from Bengal to the northern-most area of Jammu and settle here.

"It is for researchers and analysts to know how they came so far from Bengal, travelling through several states. Who paid for their tickets (to Jammu from Bengal)," he said.

Singh wondered whether there was a design or political motive behind the Rohingyas settling down in Jammu.