Marathwada's drought: Water scarcity has created a region where trust has eroded and left the social fabric frayed

Aurangabad/Latur: In recent times, the drought in Marathwada has been reported, discussed and debated, but all from a safe distance. News reports, television debates, social media commentary and even judicial pronouncements have been made regarding the situation.

Firstpost reporters spent a fortnight travelling through the arid region and witnessed the devastating social, political and ecological impact of three years of drought. It’s not just the local economy, agriculture and rural structures that are undergoing a change, cohesion and solidarity are breaking down as people and communities compete for a scarce resource.

This is the third successive year of drought in Marathwada. Water is limited and the laws of demand and supply have made it the most expensive resource. Surface water has all but disappeared as rivers, canals, ponds and nallas have dried up. Groundwater has been overexploited to the point that it doesn’t make any economic sense to dig borewells. Those with access to water are the lucky ones, while the rest are forced to buy water at inflated prices from the “water mafia”.

Marathwada is one of the most water-deprived regions of Maharashtra. The ongoing drought has evoked comparisons with the great drought of 1972. It is leading to strife not only between regions within the state, but between towns and cities and even families living in villages. Discord around water is fraying the social fabric of the region and this has revived the demand for separate statehood for Marathwada and Vidarbha.

After the 1972 drought, the state government enacted the Maharashtra Employment Guarantee Act in 1977 with the intention of empowering people and providing employment. This Act laid the framework for the National Rural Employment Guarantee Act (NREGA). In the villages that we visited, the answer to the question “What is the status of NREGA?” was a shrug and a cynical smile. People wait in a queue for water on the outskirts of Latur city. Image courtesy: aajlatur.com

The depletion of water has led to a “low trust” society, Atul Deulgaonkar, an environmental journalist based in Latur, said. “No one wants to share water with anyone else, the instinct is to hoard water.”

Latur is ground zero for the water conflicts that have marred the region. Fearing riots, the district administration imposed Section 144 at water collection points in Latur city. Farmers had protested the supply of water to Latur city from the Dongargaon dam, forcing police to intervene. Authorities in Parbhani town followed suit recently by prohibiting the gathering of more than five people at water collection points.

Perhaps the most tragic symptom of the fraying social fabric is the rise in farmer suicides. In 2015, there were 106 in Latur district alone and that number has already crossed 30 this year. In the eight districts comprising Marathwada, the number was over 1,100 in 2015, according to government data.

Independent initiatives across the region are springing up to provide a healing touch and a helping hand. Suicides are a manifestation of a complex set of socio-economic factors that resist simplistic analysis. The interventions reflect this. From initiatives like project Umed in Parbhani to the “barefoot psychiatrists” initiative in Latur, different groups are taking different approaches. The former is a door-to-door campaign by university teachers and students, who reach out and talk to distressed famers, while the latter aims to train community members in the basics of mental health to provide counselling.

In Latur, Sudhakar Shinde, a farmer-activist, is going door-to-door, meeting the families of farmers who committed suicide. He is conducting a survey that hopes to unravel the motive for a farmer choosing to end his life over staying alive. “I still haven’t understood where that line is when a person goes over the edge,” he said in an interview with Firstpost. “Not everyone who is depressed will commit suicide and not everyone who commits suicide was depressed.”

The Shree Ramanand Tirth Sanshodhan Sanshtan, an Aurangabad-based NGO is doing the survey in all of Marathwada in order to build a comprehensive socio-economic profile of farmer suicides. Firstpost spent time with each intervention during the course of our travels to understand and write about them for the Marathwada drought series. Watch this space in the coming days for a more detailed description.

Small land holders with small loans are the most vulnerable lot. Drought has reduced their already meagre yield from the land, drying up agricultural income. At the same time inflation has pushed up costs of daily essentials. The deficit has to be bridged with a loan.

Unlike governments or companies, who bridge deficits by selling bonds or taking bank loans, small farmers lack the economic and political clout to get loans restructured. Left with no options, the only solution seems to be ending life.

Even farmers with bigger farms growing cash crops seem resigned to the vagaries of nature. Mausambi farmers in Aurangabad and grape growers in Latur are desperate for a good monsoon. The chikoo produce of a farmer in Ausa Taluka in Latur has wilted. He irrigates his farm once in four days with the meagre water that his borewell coughs up to save the trees. 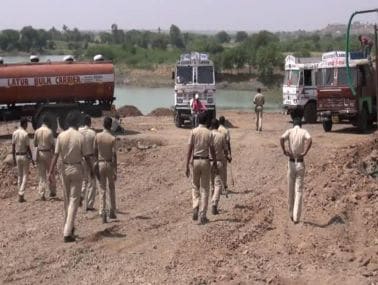 Even social relations are being reconfigured around the scarcity of water. Women in Marathwada are unwilling to marry into families that live in the worst-affected regions, like Latur. Bhau Shinde, who works with an Aurangabad-based NGO called Gramayan said that women from the region want to get married and move to bright lights and a better future in cities like Pune or Mumbai.

The shortage of water is affecting health services in Latur as doctors put off surgeries for lack of water. Since the Manjra dam, that supplies water to Latur, has gone dry hospitals and clinics are relying on tankers, which are erratic. Maintaining hygiene in hospitals has become difficult. Latur is in the midst of a major public health crisis.

Marathwada is a water-stressed society that is unravelling at the seams. While it is true that natural factors beyond the control of any country or government have caused the drought, it is equally true that the government’s inept response has exacerbated the effects. We heard the term ‘sarkari akal’ (government drought) being mentioned frequently in Marathwada. The perception of government ineptitude has fuelled public anger towards politicians so much that they are afraid to venture out here.

Frustration and anger over scarcity of water has boiled over into mistrust of elected representatives, corroding the basis of a healthy democratic society. Unless something is done about water that trust may be hard to rebuild.

This is the fourth segment of a 13-part series on Marathwada’s drought.
Part 5: Far from being temples to progress, dams have only added to the region’s problems

Read the previous parts of the series here:
Part 1: Region is parched, impoverished and desperate, but it's a crisis of its own making
Part 2: In the midst of severe economic downturn, private water sellers reap profits in Latur
Part 3: Drought has brought the economy down and is forcing farmers to leave the region