The Maharashtrawadi Gomantak Party (MGP), an alliance partner in the Manohar Parrikar-led government in Goa, on Saturday said it was "high time" the chief minister handed over the charge to the seniormost minister during his absence in the state.

Parrikar, 62, was flown to Delhi on Saturday for a follow-up treatment at the All India Institute of Medical Sciences (AIIMS). According to the Bharatiya Janata Party (BJP) sources, he is scheduled to undergo a series of tests in the afternoon at the AIIMS.

Parrikar has been undergoing treatment for his pancreatic ailment. Earlier this year, he had undergone a three-month-long treatment in the US. He had formed a Cabinet Advisory Committee to guide the state during his absence. 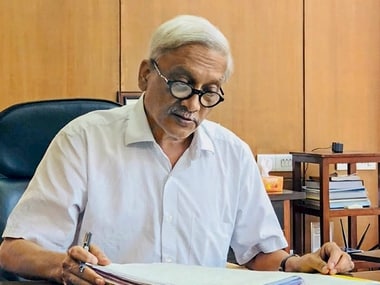 MGP, with its three legislators, has given support to the BJP to form the government in the state along with the Goa Forward Party (GFP) and other independent legislators.

Talking to reporters Saturday morning, MGP president Deepak Dhavalikar said, "It is high time Parrikar hands over the charge to the seniormost minister for smooth functioning of the government."

When asked about Parrikar's replacement as chief minister, BJP President Amit Shah told reporters in Hyderabad, "We are praying for his health to improve and the party will take a decision at an appropriate time."

Dhavalikar said in the last eight months, the government has not been able to function smoothly.

He said Parrikar can remain the chief minister and hand over the charge to someone else in his absence.

Sudin Dhavalikar, who is the the Public Works Department (PWD) Minister, is the seniormost member in the Parrikar-led Cabinet.

The MGP chief also ruled out any possibility of the MGP's merger with the BJP.

"There is no question of merger. We are not interested in the merger. It will never happen. We have built the party over several years and it is the hope for future of Goa's politics. We have 12-13 percent vote share in the state, so where is the question of merging the party," Dhavalikar added.

According to 101Reporters, BJP leaders during their visit to Goa will offer a proposal of merger to MGP and Goa Forward Party on Sunday.

The MGP's demand, however, met with resistance from other allies.

"What can I comment on MGP's statement? Everything that MGP wants need not happen. In an alliance, decisions are taken collectively. It cannot be the demand of a single party," Goa Forward Party chief and state agriculture minister Vijai Sardesai said.

He said that Parrikar had formed the Cabinet Advisory Committee to govern in his absence earlier by consulting allies, adding that, even at the time, he had not handed over the charge to the "seniormost minister".

"Why should charge be given now? Parrikar is running the government and there is no vacancy," Sardesai said.

Another minister and Independent legislator Govind Gawade also said that the question of handing over the charge to the seniormost minister does not arise and claimed that there have been no discussions about a change in leadership in the state.

Taking a swipe at Dhavalikar, Gawade said "What is important is his capability to handle the charge. The MGP is raking up this unwarranted discussion as they are masters in such acts. There is no issue of handing over charge to the seniormost minister."

The Opposition Congress, meanwhile, blamed the BJP and its allies for what it claimed was an administrative mess due to the prolonged absence of Parrikar.

Goa Pradesh Congress Committee Girish Chodankar added that the latest developments were an internal matter of the alliance.

"We don't know whether the CM is stepping down or not. We are watching the developments closely. The BJP and its allies are responsible for the mess that is happening in Goa since last 16 months," Chodankar claimed.

Meanwhile, state BJP general secretary Sadanand Tanavade said, "All the decisions related to the government are a prerogative of the chief minister and the party has nothing to say about it."